[LEXINGTON, Kentucky] — Alltech recently held the world’s largest idea conference, ONE: The Alltech Ideas Conference (ONE19), on May 19–21 in Lexington, Kentucky, the site of its global headquarters.

Over the 35 years that Alltech’s annual international conference has been held, ONE has become known as the nexus of the global food and agribusiness industries, bringing together producers and industry experts from around the world to share insights and solutions for today’s most pressing issues. As the conference theme suggested, ONE is intended to be a meeting place of people “united by the search for inspiration, motivation and one meaningful idea.” 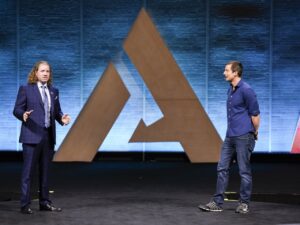 Dr. Mark Lyons and Bear Grylls during the opening plenary session at ONE: The Alltech Ideas Conference (ONE19)

ONE19 began on Sunday, May 19, when nearly 40 customers and staff from South Asia were treated to tours of Alltech facilities and headquarters, as well as some iconic Kentucky sites, including Keeneland racetrack and Taylor Made Farm, a highly successful local horse farm. The day concluded at the International Dinner at Keeneland, where leading account owners from across the globe were able to meet and dine with other attendees.

Monday, May 20 got off to a colourful start with the ONE Fun Run, an annual 5K race held at Lexington’s historic Transylvania University. The morning plenary session followed soon after, with the opening remarks given by survivalist, television personality, former British Special Forces serviceman and accomplished author Bear Grylls. Remarking that “life is an adventure that is best lived boldly,” Grylls outlined the 4 F’s, or the four things that have forged him into the success he is today: failure, fear, fire and faith.

The plenary session continued with a presentation from Alltech President and CEO Dr. Mark Lyons, who shared his new vision for the company and invited the more than 3,500 ONE19 attendees to join with Alltech in “Working Together for a Planet of Plenty™”.

The audience was also taken for an exhilarating ride with a light and dance performance from iLuminate.

Alltech then bestowed its highest honours to Bear Grylls and Dr. Richard Murphy. The Alltech Medal of Excellence, a recognition of achievement and character, was awarded to Dr. Murphy, the research director at the Alltech European Bioscience Centre in Dunboyne, Ireland. Murphy, who has worked with Alltech for nearly 25 years, was recognised for his pioneering work in the areas of organic trace element assimilation, microbial enzyme technology and the mitigation of antimicrobial resistance in livestock production. His research has been the catalyst for a revolution in animal nutrition. Murphy also spoke on the conference mainstage about the microbiome, how it functions and how we can better support it, which will have major implications for animal agriculture and for human health

The Alltech Humanitarian Award, which is bestowed annually to someone of strong character who uses their platform to positively influence and inspire those around them, was awarded to Grylls. The BAFTA award-winning survival expert has completed numerous incredible feats during his life, both on and off the screen. Most notably, he became one of the youngest climbers ever to reach the summit of Mount Everest, and even more incredibly, he did so a mere 18 months after breaking his back in a parachuting accident. Grylls shares his survival experiences, grit and determination with the world on television shows like the Emmy Award-nominated “Man vs. Wild.”

Following the plenary session, attendees were able to attend various focus sessions about different species and businesses. Some of those sessions included “Building a finer flock” by Dr.Steve Collett; “Eggciting times ahead: Innovation in poultry production” by Colin Usher; “Make a house a home” by Brian Fairchild; “Food safety and the need for improved pathogen control” by John Kirkpatrick; and “Happy and healthy: Optimising ingredients for bird health” by Robert Beckstead.

Monday came to a close with Kentucky Night at the Alltech Arena at Kentucky Horse Park, where guests enjoyed the music of Abba.

Tuesday, May 22 started with more focus sessions, including “Dairy farms of the future” by Charles Crave; “Get tech savvy on your dairy” by Jefferey Bewley; and “Global milk dynamics” by Torsten Hemme. Ms. Akshali Shah, senior vice president of strategy (sales and marketing) at Parag Milk Foods Ltd, presented about “Milk at your doorstep” and shared the success story behind their brand, “Pride of Cows,” which has been well-received on a global scale.

Some South Asian customers also participated in a Neogen workshop over lunch with Nick Adams, the global director of Alltech’s Mycotoxin Management program.

The final ONE19 plenary session began with Ramez Naam, co-chair of energy and environment at Singularity University, who discussed the future of agriculture.

“The world is facing many sustainability challenges, including food insecurity, depleted water resources and natural disasters, like increased flooding and wildfires,” he said. “Additionally, as the middle class continues to grow, we will need to produce 60 to 80 percent more food, including more animal protein, by 2050 — and all with less water and land.”

Despite these seemingly insurmountable odds, Naam said he believes that the earth is actually on the path to becoming a Planet of Plenty™ and that agriculture will plan a critical role.

Following Naam was Chris Zook, a best-selling author and advisory partner at global management consulting firm Bain & Company, who discussed the critical role of simplicity in business and the importance of embracing the founder’s mentality.

The plenary session also included an award presentation featuring the bright young scientists participating in the Alltech Young Scientist (AYS) competition, the largest agri-science competition for graduate students in the world. Now in its fourteenth year, the AYS competition received submissions from 120 universities in 40 countries. Deeksha Shetty, representing the University of Saskatchewan in Canada, was selected as the 2019 Alltech Young Scientist after presenting her research to a panel of international judges. Her winnings include US$10,000, as well as career mentorship and networking opportunities with innovative scientists from around the world.

Alltech was also proud to introduce a new award at ONE19. In conjunction with the International Federation of Agricultural Journalists (IFAJ), the IFAJ-Alltech International Award for Leadership in Agricultural Journalism recognizes excellence and leadership exhibited by young journalists. As selected by international judges from Alltech and IFAJ, the recipient of the inaugural award was Denene Erasmus, an editor at Farmer’s Weekly, the largest English language agricultural publication in South Africa.

The closing plenary session also featured the announcement that Alltech and UK HealthCare at the University of Kentucky are forging a momentous partnership to support lifelong wellness. The newly created Lyons Family Life Foundation will honour the life and legacy of late Alltech founder Dr. Pearse Lyons.

Speaking to the local and international press gathered for ONE19, Dr. Mark Lyons and Dr. Phillip Chang, chief medical officer at UK HealthCare, explained that the collaboration will focus broadly on total wellness, empowering people to both live well and die well. The initiative was inspired by Dr. Pearse Lyons’ lifelong endeavour to “make a difference.”

In his closing remarks, Dr. Mark Lyons reiterated his new vision of “Working Together for a Planet of Plenty™”. Lyons noted that, 39 years ago, his father took the stage at the same conference and emphasised the importance of producing solutions that benefit the animal, the consumer and the environment.

With each passing year, ONE: The Alltech Ideas Conference proves to be the world’s best networking platform for agribusiness leaders from across the globe. Every year, the customers from South Asia who attend are able to experience Alltech’s innovative ideas, rooted in the prestigious heritage of Dr. Pearse Lyons.

“ONE is all about vibrant business ideas, interaction with pioneers, planning for the future and exhilarating entertainment,” said Dr. Aman Sayed, managing director of Alltech India and regional director for South Asia. “Being in the audience in the plenary sessions and focus sessions is always an unforgettable treat for our customers.”

Next year’s ONE: The Alltech Ideas Conference, which will be held on May 17–19, 2020, will celebrate Alltech’s 40th year in business.

KEMIN LAUNCHES NEW VISION AND LOGO FOR THE FUTURE