Global poultry feed market is currently showing the increased demand for protein and nutrient rich food like poultry egg, meat and meat products. If farmers are to be able of feeding approximately 9 billion people in the world by 2050 then they must find some methods to produce relatively economical high-quality products. The cost of the feed accounts for approximately 70% of the cost in poultry production (Cooke, 1987). Soya bean and maize are widely utilized by poultry farmers in India as the main feed. These satisfy only minimum nutritional needs of birds. Major challenge in global poultry production is food safety, environmental issues, standardizing welfare standards, ban of nutritive antibiotics, gut health, feeding rich in fibre ingredients and maintaining high efficiency of production. There is also the problem of monitoring of the poultry feed mixtures. Preparing poultry rations is not just a case of milling and mixing cereals, inclusion of additives is as important (Kataria et al.,2005). 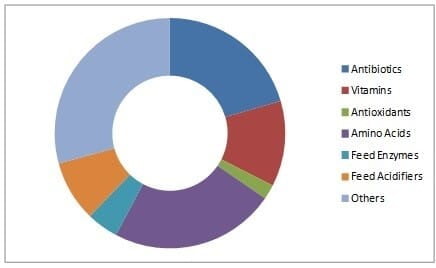 Non Ionophore antibiotics are Tetracycline, avoparcin, Zinc bacitracin, virginiamycin, flavomycin, tylosin etc. (Chowdhury et al.,2009) are mainly used in poultry diet. Due to some limitations like residues in chicken meat and eggs transferred to human, bacterial resistance to antibiotics, consumer awareness. Antibiotics Growth promoters are banned in some countries like European Union Legislation since 2006. So many alternatives are used in place of antibiotics like natural growth promoters, Phyto biotics etc. Arsenicals improve growth of broilers causing bright red combs and wattles due to dilator effect on capillaries and they also have the antimicrobial properties.

Exogenous Feed Enzymes
Enzymes act as catalysts which help in digestion and nutrient utilization that otherwise go unused from body. They reduce anti-nutritional effects of non-starch polysaccharides in plant cell wall components present in cereal grains and oil seeds (Ravindran & Son,2011; Bedford, 2000). They also reduce the gut content viscosity. A better protein and amino acid digestibility can be seen in very young birds when given protease with feed in which endogenous proteases function remain not so optimal (Walk et al., 2018). E.g. β-glucanases, β-Galactosidases, Cellulases and Phytases, Xylanases, Proteases, Lipase, Amylases. A multi-enzyme preparation with cellulolytic and proteolytic properties is used in advanced nutrition. E.g. Avizyme series 1500. Feed enzymes like β-glucanases and xylanases have enabled Barley or Wheat up to 50-60% in poultry diets.

Hormones
In some countries use of hormones is banned due to much public concern because of residues in poultry products. Hormones have high potential for increased protein and reduced fat deposition (Buttary and Dawson,1987). Thyroxin is given in form of Iodinated casein at 100-200mg/kg feed in layers for improved egg production. Thiouracil (anti-thyroid drug) in combination with DES (diethyl stilbesterol) improves finish and market quality without depressing growth rate. Dienestrol diacetate is only hormonal Feed Additive that is currently approved at 0.0023-0.0035% in feed of broilers only. ‘Panchgavya’ are rich source of minerals as well as hormones.

Probiotics are live culture of nonpathogenic microbes promoting the gut health (Fuller, 1989). These beneficial bacteria compete and secure the attachment sites in gut wall by competitive exclusion of pathogenic harmful bacteria and improve the intestinal microbial balance. E.g. Lactobacillus acidophilus, Streptococcus faecium, Bacillus. Live yeast culture with Lactobacillus ‘Lactosacc’ was given in broilers (1kg/ton feed) which showed improved weight gain and FCR, reduced mortality and morbidity. Probiotics having Pediococcus acidilactici and Saccharomyces boulardii acts as prophylactic against coccidiosis in birds. Probiotics neutralize the microbial toxins by producing substances like lactoferrin, fumonicins (Patterson & Burkholder, 2003). They have bactericidal activity like Lactobacillus produces lactic acid reducing the PH to a level that is unfavorable for E. coli. In addition, H2O2 and inhibitory substance ‘Acidolin’ are produced that are harmful to coliform bacteria.

Prebiotics are non-digestive feed ingredients which selectively enhance growth and activity of bacteria already present in the GIT, thus improve the host health and assist in immune modulation (Gibson and Roberfroid,1995). E.g. Fructo oligosaccharide (FOS) in, Mannan oligosaccharide (MOS), α Galacto oligosaccharide (GOS), Trans Galacto oligosaccharide (TOS). Prebiotics and Probiotics together called as ‘Synbiotics’. Mookiah et al.(2014) found more beneficial growth rate of birds with supplementation of synbiotics in the diet compared to either probiotic or prebiotic alone. Pathogenic bacteria in gut which have surface compounds called as Lectin. This lectin bounds with the free carbohydrate oligosaccharides and prevent the pathogenic microbes to attach to gut wall and flow out these from gut along with the digesta.

Organic acids are usually added as feed preservatives for preventing food deterioration and extending the shelf life of perishable food ingredients (Parks et al.,2001; Abdel-Fattah et al.,2008). Ca-formate (1.3%) is added which is converted to formic acid in their crop. Mixture of fumaric acid and salt of Butyric acid, propionic and lactic acids supplementation at 520 PPM improve egg production, egg size, shell thickness in layers. Benzoic acid at 0.2% may have positive influence on growth in broilers. They have antimicrobial effect on harmful gut microbes by reducing gut PH; improve consistency of layer droppings resulting in fewer dirty eggs; better Ca absorption and eggshell quality; reduce the effects of Ascites in poultry.

Antioxidants prevent the fat oxidation and help to avoid rancidity of fat in poultry products. They also mop up the free radicals in the body and usually added at 0.01%/kg feed (Surai et al.,2019). E.g. Natural antioxidants are Vit. E (most active), Vit. C, Selenium, Rosemary extract, carotenoids and flavonoids. Synthetic antioxidants are Butylated hydroxy anisole (BHA), Butylated hydroxy toluene (BHT) and Ethoxyquin. Vit. E and Rosemary extract are of good consumer appeal. Certain metals like Cu and Fe are active catalysts of oxidation, so they need to be removed by some compounds called as Sequestrants or metal scavengers like Ca salt of EDTA.

Nanotechnology helps in development of novel ‘Silver-Silica’ based composite material having good antimicrobial properties. It also helps to reduce size and increase surface area of Cu-Nanoparticles compared to the bulk material leading to a variety of applications like chemo sensors, surfactants. Nanotechnology is used in the application of Nano sized minerals as a tool in the field of Mineral Nutrition.

Anticaking agents are anhydrous substances used in preparation of mash type feed. They avoid the problem of cake or lump formation by picking up moisture without themselves becoming wet. E.g. Salts of short chain Fatty acids (Ca stearate), Ca phosphate, MgO, Kaolin. Odor of litter in poultry is a problem to farmers due to urea or uric acid present in urine and faces of Poultry. Urea is hydrolyzed by urease into NH3. ‘Yucca shidigera’ extract in diet as deodorizing agents blocks the action of urease and avoid NH3 toxicity.

NaHCO3 is used to potentiate coccidiostats and to improve weight gain, livability and processing yield under stress condition. It is mixed in broilers feed at 1.8-2.7kg/ ton, in layers feed at 1-1.8kg/ton, during heat stress at 3.6-4.5kg/ton. It is usually given via water rather than the feed.

They help in fat digestibility in young chicks because of limited fat digestion in them due to low lipase and low bile production. E.g. Bile salts (natural emulsifier), Soy-lecithin, Lysolecithin, Milk derived casein.

Chelate is cyclic compound which is formed between an organic molecule like amino acid and a metallic ion or inorganic molecule (Hudson et al.,2004). Chelating agents like EDTA are used to increase the bioavailability and absorption of certain minerals like Zn. Various Types of chelates are Metal specific amino acid complex, Metal Amino acid chelate, Mineral proteinates, Mineral polysaccharide. Limited work has been done in India on use of chelated minerals. Majority of animals do not receive even low cost ‘Common salt’ in India.

Intestinal worms like (Ascaris, Heterakis, Capillaria, and Taenia) are killed by use of vermifuges. Piperazine marketed under the name ‘Wazine’ and Fenbendazole under the name ‘Aquasol’ for poultry. Feed thru larvicides contain insect development inhibitors are used in feed. Anthelmintic require more than 1 administration (1st kills those worms which are present in the body and 2nd kills those which hatched from eggs after initial dose).

Best method of controlling fungal infestation is to dry all feeds below 12% moisture. Mold inhibitors like Formaldehyde should be sprayed in the form of fine mist over finished feeds before packing of feed during storage. 3 main toxin producing fungi are Aspergillus, Fusarium, Penicillium. These fungi produce many Fungal toxins like Aflatoxin, Ochratoxin, Zearalenone, Trichothecens (Saleemi et al.,2017). Toxin binders are used for the removal of mycotoxins through feces. E.g. Activated Charcoal, Synthetic Zeolite, Mineral clay, Sodium bentonite (Bhatti et al.,2016). Common commercially available mycotoxin binders are Mycosorb, Mycofix, ProSid and Mycoad. Toxicity of Aflatoxin in feed can be reduced by using UV light, by mycotoxin binders or by exposing feed to anhydrous NH3 under pressure (Sana et al.,2019).

Conclusion:
Each of these feed additives has their specific benefits. There is no debate that several feed additives can bring many changes in the animal’s response to nutrients and disease challenge. Since inconsistent effects have been seen while using the poultry feed additives. So Further research is needed to not only identify new hope for poultry feeds additives but also need to recognize that how combinations of these additives can be used to improve the efficiency of poultry production. Work is required to minimise their negative effects if not used correctly or if they interact with other additives or feed ingredients. Systematic approach is required to explain the efficacy and mode of action for each of type and dose of additives. Approvement of various feed additives for use is important. After that they should be utilized as directed with inclusion levels and duration of feeding. They should also be specific for the age of birds being fed. Non antibiotic growth promoters such as organic acids and probiotics should be used. Safety should be in mind to reduce the feed industry’s impact on the environment.