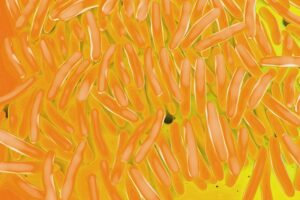 Birds are highly susceptible to many infections and diseases which are caused by a variety of microorganisms such as bacteria, viruses, fungi and parasites. The birds’ vulnerability to these infections is particularly high in intensive commercial poultry rearing systems worldwide. Without their effective immune systems birds would hardly be able survive in such a hostile environment.

Avian species’ immune system is quite unique as they don’t possess lymph nodes but instead they have lymphoid aggregations along the gastrointestinal tract (GIT) and other mucosal surfaces. The GIT-associated lymphoid tissue (GALT) has about 65-70% of the birds’ immune system. This means that in addition to the digestive and absorptive functions, the gastrointestinal tract is also considered the major immune organ in birds.

Under natural conditions, chicks hatch in close proximity to the mother hen, allowing them to eat and drink as soon as they are hatched. Microflora from the mother hen also colonizes the gastrointestinal tract of young chicks. Early feeding and microflora colonization have very positive effects on birds’ performance and on the maturation of the birds’ immune systems.

Poultry production under modern husbandry practice does not allow newly hatched chicks to come into contact with mother hens, slowing the development of gut microflora and the immune system by 3 weeks or more. The lack of the gut microflora establishment opens the door to enteric colonization by pathogens, making the chicks susceptible to infections and diseases.

Lactic acid bacteria-based probiotics support a bird’s immune system in several ways. They play an important role in the development and establishment of gut microflora and encourage rapid maturation of the immune system. This helps the birds to respond better to vaccines and also defend themselves against infections. Probiotics also have an important role in combating diseases and infections.

Commensals and probiotics are always sensed by immune cells, where antigen presenting cells such as macrophages, dendritic cells and B-cells sample these beneficial bacteria and induce specific local immune modulation with the activation of B-cells to produce secretory IgA against these beneficial bacteria which can be considered harmless and non-inflammatory in the mucosal and the systemic environment (oral tolerance). Probiotics help the host’s immune cells to better recognize and eliminate harmful pathogens. Improved tolerance coincides with less energy expended on inflammation, leaving more energy directed towards growth.

More in-depth work has been done in humans looking at the effect of probiotics on vaccine response. For instance, a large increase in vaccine-specific serum IgA and IgG antibodies titres was observed in individuals that received Lactobacillus– and Bifidobacterium-based probiotics with Salmonella typhi and Cholera vaccines compared to those who received the vaccine alone (Paineau et al., 2008, Maidens et al., 2012).

Similarly, but to a lesser extent, some work has been done in birds. For example, Methner and others (2000) found out that the administration of the live Salmonella vaccine before or at the same time as probiotics offered the best protection against experimental Salmonella challenge as a result of the development of a stronger immune response.

Synbiotics build on the success of probiotics

The benefits of probiotics, or beneficial bacteria, in supporting gut microflora are well documented. Prebiotics are non-digestible food ingredients that beneficially affect the host by selectively stimulating the growth or activity of one or several beneficial bacteria in the gut. Synbiotics combine prebiotics and probiotics in order to deliver further benefit to animals.

A study performed at Kasetsart University, Thailand, evaluated the effect of PoultryStar® — the first poultry-specific, multi-species synbiotic product to be authorized by the EU — against flavomycin — an antibiotic — and negative control on broilers’ performance and immune status following infectious bursal disease (IBD) vaccination on day 14. Compared to the other trial’s groups, PoultryStar® increased performance in addition to increasing IBD antibody titres, indicating an up-regulation of the birds’ immune status (Table 1).

A similar effect on vaccine response was noticed in a recent field study where birds were divided over two houses, each house was divided into two groups; a PoultryStar® group and a control group. On the first day, all the groups received Newcastle disease virus (NDV) and infectious bronchitis virus (IBV) vaccines in the hatchery followed by NDV vaccine on day 15. On days 35 and 42 NDV vaccine titres were found to be higher in the synbiotics treated groups (Figure 1).

How synbiotics enhance vaccines response is not fully understood. The positive effects of synbiotics might be due to the fact that probiotics work as adjuvants for vaccines (directing immune response) and as facilitators of a return to tissue homeostasis following pathogen challenge. Moreover, the diversity and composition of the gut microflora also may influence the efficacy of oral vaccines. The failure to develop protective immunity to vaccines in particular geographical areas could be due to intestinal microflora composition among other reasons (Valdez et al., 2014). Combining probiotics with vaccines has a positive effect or sometimes no effect on the vaccine response as the response is dependent on the probiotic strains used (Maidens et al., 2012).

With the increasing interest in the use of probiotics in animal production, it is important to understand the role they play in modulating the bird‘s immune system. Although the immuno-modulatory activities of probiotics are not yet fully understood, they can increase birds’ immune response following vaccination.