Stress is a method adopted by the body to cope with any challenge. Birds in particular are very sensitive to environmental challenges such as high ambient temperatures which cause heat stress. In poultry, heat stress has undesirable effects on gut health, nutrient digestion and absorption, the immune system and increases the oxidative stress levels, leading to a decrease in productivity and increase in economic losses for producers.

The gastrointestinal tract is particularly responsive to stressors. Under heat stress conditions, morphological and physiological changes are observed which negatively affect the functionality and integrity of the intestinal epithelium and increase the susceptibility to diseases such as Salmonella spp. infections. Heat stress affects the gut permeability due to the disruption and alteration of the tight junction proteins. Also, through vasodilation, heat stress reduces the blood flow to the epithelial cells, resulting in a lower supply of oxygen and nutrients to the enterocytes. Next to the increase of gut permeability, heat stress also affects the intestinal microbial populations. Heat stress increases the abundance of harmful bacteria while decreasing the abundance of beneficial bacteria. This profoundly changed microbiota population also contributes to an increased gut permeability and immune and metabolic dysfunction.

Figure: The gastrointestinal tract is particularly responsive to stressors whereby the tight junctions (A), villi height and crypt depth (B), the microbiota composition (C) and the digestive enzymes (D) are affected. 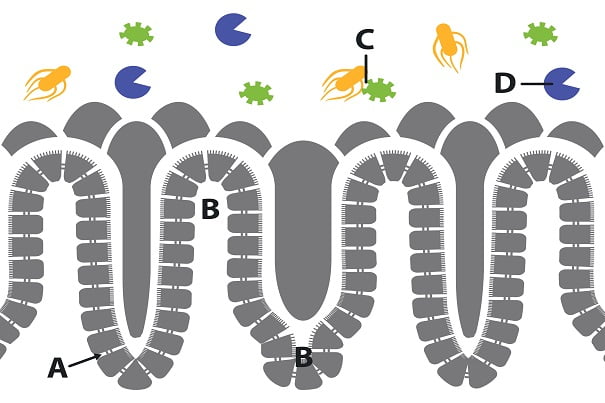 The gut plays a vital role in nutrient absorption and digestion. Morphological alterations of the gut epithelium are observed in heat-stressed poultry. Villus height, crypt depth, villus width, and/or the ratio of villus height to crypt depth are all affected by heat stress, resulting in a reduced villus absorptive surface area and a negative impact on nutrient absorption. In addition, nutrient absorption is reduced due to changes in the expression of intestinal nutrient transporters. Besides the fact that heat stressed birds reduce their feed consumption, heat stress also leads to a reduced dietary digestibility. The digestibility of carbohydrates, proteins and lipids is reduced by alterations in the activities of digestive enzymes such as amylase, maltase, lipase, trypsin and chymotrypsin. Ultimately, certain essential nutrients such as proteins, amino acids, minerals and vitamins become deficient.

Heat stress increases susceptibility to diseases in poultry as it has an immunosuppressing effect. The function of the lymphoid tissues such as the thymus, spleen and bursa, is decreased during heat stress. Lower levels of total circulating antibodies are observed resulting in a reduced vaccination efficiency. The function of macrophages is also negatively affected by heat stress. Their number performing phagocytosis as well as their phagocytic ability and their participation in oxidative burst is reduced, resulting in a less effective immune response. 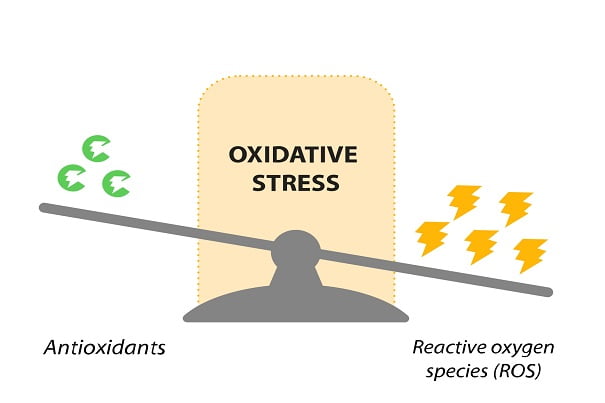 Under environmental stress conditions, like heat stress, cells have a higher energy need and consume double the amount of energy as usual. To fulfil this need, the energy metabolism increases leading to a higher electron leakage out of the electron transport chain in the mitochondria and an increased production of reactive oxygen species. In addition, the increasing concentration of ROS during oxidative stress contributes to an increased intestinal permeability, which facilitates the translocation of bacteria. Furthermore, animals experiencing heat stress have a reduced antioxidant capacity. Consequently, the bird’s body will enter a stage of oxidative stress that will damage cells and tissues and causes a further decrease in the bird’s performance.

For birds to maintain their normal body temperature and metabolic activities when they are outside of their thermoneutral zone, they have to consume energy that would preferably be used for growth and meat/egg production. When birds are panting to lose heat, they lose 540 kcal of energy for every 1 ml of water evaporation. Additionally, during heat stress, feed consumption decreases while water intake increases resulting in a higher feed conversion rate and a lower weight gain and dressing percentage in broilers. Layer and breeder flocks exhibit a decrease in egg production, size and shell quality, hatchability and fertility due to heat stress.

References are available upon request. 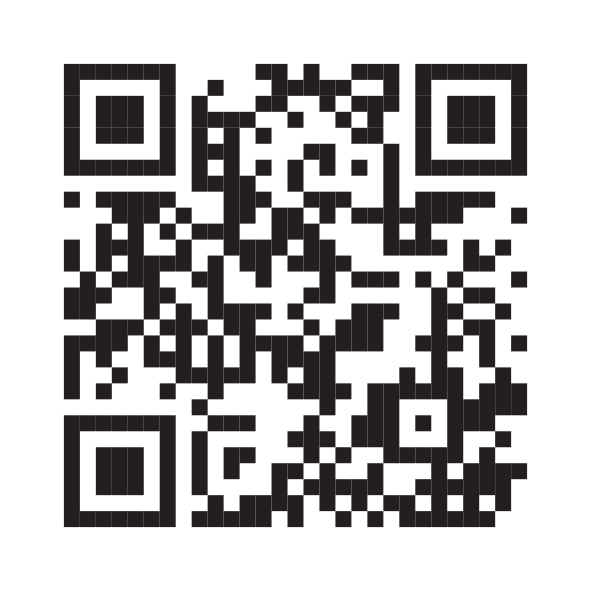