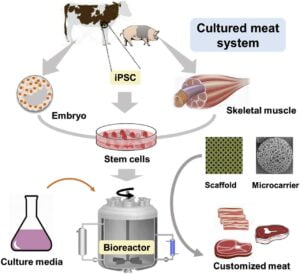 Meat consumption is an essential part of the human diet. Meat for consumption is traditionally obtained from animals that are reared and slaughtered on farms. With the increase in human population and urbanization across the world, it is predicted that consumption of meat would be doubled by 2050 and the conventional meat alone would be inadequate to meet the demand. Moreover, limited land resources and the negative perception to animal slaughter are encouraging scientists to develop innovative techniques to produce meat without rearing animals.

In 1932, Winston Churchill, Former British Prime Minister predicted that “Fifty years hence we shall escape the absurdity of growing a whole chicken, in order to eat the breast or wing by growing these parts separately under a suitable medium”

Almost after eighty years, science may finally be getting close to producing In-vitro meat muscle tissue grown in the laboratory without using any animal (Bhat et al. 2015).

Meat is an important nutritional and social factor for the human race and meat consumption is expected to increase in coming years. Convectional meat production may not be capable of feeding the increasing population. In 2019, the World population estimated to be 7.7 billion (US census) also 1.05% increase rate per year i.e. 81 million people per year has been showed. Global hunger continues to rise as new UN Report says 821 million people are now hungry and over 150 million children stunted, putting hunger eradication goal at risk (WHO, 2017) which is one of the Goals of the Sustainable Development Goals to be achieved by 2030.

FAO baseline projected (Bruinsma, 2009) 70% increase in global food demand by 2050 due to population growth and change of dietary pattern. FAO projected that by 2050, average per capita meat consumption to be increase by more than 70% higher than that in 2010 which would cause change of 553  million tons increase in the demand for feed, which represents half of the total demand increase for coarse grain between 2000- 2050. There has been noticeable change i.e. increase in crop production to meet the increase feed demand. This has resulted in widespread deforestation and displacement of farmers and a major contributor to climate change and environmental destructions. One-third of global arable land is used to grow feed, while 30% of the Earth’s ice-free terrestrial surface is used for grazing. (Food and Drink Report, 2018-19). Calories that are lost by feeding cereals to animals and poultry could theoretically feed an extra 3.5 billion people (United Nations Environment Programme). It takes more than 3 Kg feed to produce 1 Kg chicken, 4kg for 1 Kg pork, 7 Kg for 1 Kg beef (United Nations Environment Programme).

Another natural resource which remains extensively in use in production of farm animals is water. Consumption of Water (litre/Kg) for conventional meat production ( Mekonnen and Hoekstra ,2010)

Contamination with bacteria like Salmonella, E.coli and other organisms could be possible which would come due to contact with animal contaminants like faeces, urine, offals etc. This might increase the chance of food borne diseases through contaminated meat and meat products and these are of public health concern.

Moreover “cruelty is never justified” i.e. 72 billion animals are killed every day for human consumption, i.e. 50 billion of these animals are chickens, 1.5 billion pigs, 546 million sheep, 444.2 goats, 300 million cattle. Many argue that there is no “humane” way to kill an animal. Many livestock and poultry are raised in pens and cages without room (UN Food and Agriculture Organization, 2017).

The idea of In-vitro meat production was introduced in 1932. Later on many scientists tried to work and produced this type of cultured meat under laboratory conditions. In 1995 in-vitro meat production idea got boosted up as NASA wanted improvements in food for Astronauts in space, technique and it also got FDA approval. In 1943, a French science fiction author Rene Barjavel described in-vitro production of meat in restaurants in his novel ‘Ravage’ in 1943 later translated as ‘Ashes, Ashes’ in 1967. In 1999 Van Eelens theoretical idea was patented. Benjaminson et al. (2002) cultured muscle tissue from the common goldfish (Carassius auratus) in Petri dishes. John F Vein possessed a patent on tissue engineered meat for humans.

In India, Kartik Dixit, an entrepreneur from Nagpur, while researching meat consumption felt it was necessary to tie up with food scientists and researchers to come up with an alternative meat product. He along with Dr. Pavan Dhar and Dr. Siddarth Manvati, two scientists at Jawaharlal Nehru University (JNU), in 2018 tried to grow cells in a lab and clump them into protein. And thus, ClearMeat was born in 2018 in Delhi, India’s first clean chicken meat startup. It uses chicken cells to artificially produce meat in an attempt to help end animal slaughter in India. In February 2019, the Good Food Institute and Institute of Chemical Technology, Mumbai signed an agreement to set up a cell-based meat research facility in Maharashtra and within a year of the MoU, the Centre for Cellular and Molecular Biology was awarded a substantial grant of ₹4.5 crore from the DBT towards the development of cell-based meat “Ahimsa Meat” in March 2019, with National Research Centre on Meat, Hyderabad playing a supporting role.

Cell source: Most practical cell source are embryonic Myoblasts called as Satellite cells or Myosatellite cells. Myosatellites are precursor to skeletal muscle cells, able to give rise to differentiated skeletal muscle cells (Benjaminson et al. 2002; Mouly et al. 2005;Le Grand and Rudnicki, 2007). These cells have high proliferative potential can be isolated and collected by Biopsy Procedure( Danoviz and Yablonka-Reuveni, 2012). Myosatellites are located between the basal lamina and sarcolemma of muscle fibre (Kuang and Rudnicki 2008; Roobrouck et al. 2008). To improve the quality of cultured meat, it may be desirable to co-culture adipocytes (fat cells) with myofibrils in order to enhance the texture, flavor and tenderness of cultured meat by effectively increasing the intramuscular fat (Hocquette et al. 2010). Tissue engineering of adipose cultured cells has been described by Frerich et al. (2011), Dodson et al. (2012) and Verseijden et al. (2012).

One of the challenging task in in vitro meat production is the right formulation of culture medium. The medium should support and promote growth while being made of afordable, edible components available in large quantities. Fetal bovine serum- in vivo source is variable in composition and is a potential carrier for pathogenic agents. Another standardized media and serum-free media is Ultroser G. The composition of Ultrosr G mainly consists of growth factor, adhesion factor, binding protein, vitamins, minerals and hormones which are necessary for the growth of cells but the cost is on little higher side (Coecke et al. 2003; Houdebine LM (2009); Gaydhane et al. 2018). Purifed growth factors or hormones may be added to the culture media from plants, animals or transgenic bacterial species which generates recombinant proteins. Co-cultured hepatocytes can produce insulin-like growth factors which promote myoblast proliferation and differentiation and also myosatellite cell proliferation in some animals.

Rotating wall vessel bioreactor rotates in such a way that its speed balances the centrifugal force, drag force and gravitational force and allows the three-dimensional culture to submerge in the medium which helps in developing the structure of tissue similar to that of in vivo.

Cell culture or Scafolding technique : A scaffold based in vitro meat production system would involve isolation of embryonic myoblasts or adult skeletal muscle satellite cells from the farm animals like cattle, sheep, pig, etc., which would be allowed to grow inside a stationary or rotating bioreactor using a plant origin growth medium. These cells would divide and re-divide for weeks and months together and would be finally differentiated into the muscle fibers onto a scaffold inside the bioreactor. Attached to a scaffold or carrier such as a collagen meshwork or microcarrier beads, stem cells fuse into myotubes, which can then differentiate into myofibers by introducing a variety of environmental cues (Kosnik et al. 2003). The resulting myofibers may then be harvested, processed, cooked, and consumed as emulsion or ground meat products. This technique produces soft consistency meat or boneless meat which can be used to prepare hamburger and sausages etc.The main drawback associated with this technique is it cannot produce highly structured or 3D structured meat for e.g. Steaks.

Self‑organizing or tissue culture technique : Potential method of creating In-Vitro meat where tissue sample or explants are collected. This method was 1st described by Benjaminson et al. 2002 where he collected muscle tissue from the common goldfish. The self-organizing technique creates highly realistic 3-D structured meat like natural conformation meat. Only drawback associated with self-organizing technique is if cells are separated from nutrient media, it makes them necrotic due to insufficient blood supply.(Bhat et.al 2015).

Organ Printing : This technique involves the spraying of live cells or balls of cells in layers over the gel that acts as a printing paper and the cells get fuse to create 3D structure of any shape even has the capability of producing entire organ.0.8-1% Aqueous Alginate solution with 2% CaCl2 Solution forms the Hydrogel. An advanced technique which can take care of meat consistency, vascularization, fat marbling and other elements of conventional meat like taste and appearance.  The only drawback with this technique is it is expensive and is still under development. (Boland et al. 2003; Hopkins, 2015)

Biophotonics: This is the probable technique which uses laser light to hold the cells and allow them to coax and grow in an organized structure. It eliminates the use of scaffold for production of tissues by holding the cells together using laser light (Hopkins et al.2008, Noor et.al.2016).

Nanotechnology : Nanotechnologists are working on to create Nanorobots or Assembler which can selectively group the similar atoms or molecules forming the entire structure. It can virtually create any substance of any desired shape in a primitive state (Mullins, 2006; Bhat et.al.2015; Noor et al. 2016; Gaydhane et al. 2018).

Merits of Artificial meat over the conventional meat

Meat substitutes like Quorn and Tofu got accepted and the people have shift to semi-vegetarian, it may also not be difficult to accept the cultured meat in future. It can also be use as a ‘medicinal’ meat for its more nutrient content. Increasing awareness and consciousness towards environment amongst masses can urge people to shift to consumption of cultured meat. Technological development to scale-up production and processing in terms of storage, packaging, stability, and quality also needs attention. Governments also need to work on regulatory guidelines for aiding acceptance of cultured meat and keeping a check on quality and purpose before the commercial success of these products.

Conventional meat production systems are associated with several problems. Whereas artificial meat holds great potential to replace slaughtered animal meat and meat-based products. With increase demand for meat, Cultured meat production should be promoted to provide eco-friendly and disease-free meat to consumers. However, it is also important to conduct in-depth research and develop strong technical knowledge to further refine the technology and make it economically feasible and commercially viable to develop healthy and safe meat for consumers.