Chicken egg is a popular food item for all societies of the world. The avian egg’s complexity is a major challenge for food scientists and nutritionists eager to elucidate its biochemical processes chicken eggs are the most commonly eaten eggs. Eggs supply all essential amino acids for human and provide several vitamins and minerals including retinol (vitamin A), riboflavin (vitamin B2), folic acid (vitamin B9), vitamin B6, vitamin B12, choline, iron, calcium, phosphorus and potassium. Eggs are also a single-food source of protein. Protein is necessary for the body to build and repair body tissues. Consumers are always prepare newer products and are driving the market for a new category of food with potential health benefits well beyond those traditionally recognized. In the context eggs are considered by most consumers to be a healthy food due to its excellent nutrients profile, less cost and versatility in food preparation. Enriched eggs or nutritional enhanced eggs are called as Designer Eggs, Pre-Ovipositor Value Added Eggs, Health Promoting Designer Eggs or Enriched ω-3 Eggs. Designer eggs” are those in which the content has been modified from the standard egg. 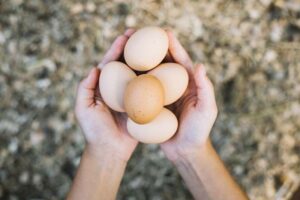 The main nutritional components of the hen’s egg are: water (74%), protein (13%), fat (11%), carbohydrates (1%) and other nutrients with minor percentage including minerals, vitamins and carotenoids. Egg’s macrostructure is approximately 9-12% of shell, 60% of albumen and 30-33% of yolk. Yolk lipid content is around 33% including 63.3% of triacylglycerols, 29.7% of phospholipids (phosphatidylcholine: 73%; phosphatidylethanolamine: 15%) and 5.2% of total cholesterol. 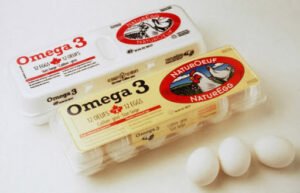 The large (50 gram) chicken egg contains approximately 5 grams of fat. Only 27% of the fat in egg is saturated fat (palmitic, stearic and myristic acids) that contains LDL cholesterol. Dietary cholesterol increases the ratio of total to HDL cholesterol and adversely affects the body’s cholesterol profile. The consumer’s attitudes towards lipid in general have changed their attitude towards egg consumption because of fear that egg cholesterol will raise their blood cholesterol levels. Egg contains the best and least expensive high quality protein and balanced distribution of minerals and vitamins. More than half the calories found in eggs come from the fat in the yolk

The hen egg is a potential source of unsaturated fatty acids because hens have a unique ability to deposit dietary lipid into the egg yolk. The many attempts to reduce egg cholesterol content have met little practical application an alternative way to reduce the cholesterol effects of eggs is by altering the yolk fatty acid composition. Egg yolk total fat content cannot be altered. The fatty acid composition can be altered by changing the type of oil used in hens’ diet. The scientific development in the field of nutrition excelled considerable interest in the long-chain polyunsaturated fatty acids (PUFAs) especially n-3 fatty acids in human health. The fatty acid composition of yolk fat can readily be modified by diet. In recent years several researchers have investigated the ability of the hen to enrich the egg with omega-3 fatty acids. A large egg contains approximately 200 – 220 mg of cholesterol. Genetic selection of hens for lowered cholesterol has not been successful in lowering the egg cholesterol content.

The cholesterol lowering effects of (n-6) and (n-3) polyunsaturated fatty acids (PUFAs) have been recognized for some years and feeding layers diets rich in PUFA results in a large increase in the relative and absolute concentrations of PUFAs in yolk total lipid. The pioneering discovery that omega-3 fatty acids protect against coronary heart disease in Greenland Eskimos consuming fish has generated much research over the past decades on the various health benefits of dietary omega-3 fatty acid from fish oils. Omega-3fatty acids which are essential nutrients both for adults and children and protect against cardiovascular and inflammatory diseases as well as certain types of cancer. The benefits of dietary omega-3 PUFA include reduction in plasma triglycerides, blood pressure, platelet aggregation, thrombosis & atherosclerosis particularly in diabetics, tumor growth, skin diseases. Longer chain PUFAs contain volatile compounds which produce characteristic “fishy” or “paint-like” aroma and cause off-flavor in eggs enriched with these fatty acids. flaxseed, marine algae, fish oil, perilla oils, sunflower oil, etc are incorporated to hen diets in order to increase the ω-3 fatty acid content in the egg yolk at the expense of saturated fatty acids, mainly palmitate and stearic acids. Flaxseed is among the most concentrated sources of PUFAs, especially linolenic acid available in natural food and feedstuffs. Because of benefits associated with eating foods that contain omega-3 polyunsaturated fatty acids most egg production companies now market the eggs rich in omega-3 polyunsaturated fatty acids, enriched in linolenic acid, which is a precursor of DHA and is protective against fatal ischemic heart disease. The hen’s diet is relatively rich in flaxseeds or linseeds as a result of which the egg yolk is enriched with linolenic acid and hence DHA levels are raised.

Directly, include pre-formed DHA in hen’s diet in form of fish oil. One large designer egg supplies more than 600 mg of most need omega-3 fatty acids and 6 mg tocopherols it would still have additional beneficial effects for egg consumers due to its balanced ratios of polyunsaturated /saturated fatty acids (1:1) and omega-6/omega-3(1:1). The designer eggs offer an alternative choice of food product to today’s nutrition-health conscious consumers around the world. Yolk lipids and fatty acids are susceptible to oxidation. It is, therefore, essential to prevent the rancidity of designer egg yolk lipids by incorporating antioxidants in hen diet.

Vitamin E – an important antioxidant found in vegetable oils that protects against cancer and other diseases. Docosahexanoeic fatty acid (DHA) – a fatty acid found in fish that is important for brain development and boosts the immune system.

Lutein – one of the most important carotenoids found in vegetables that also protects against cancer. Selenium – a trace metal found in nuts that has similar benefits to the other nutrients

Designer eggs can be produced with higher concentrations of several vitamins particularly vitamin A and E. Although, the vitamin content of eggs varies with the diet of hen but the hen may also differ in transferring the different vitamins with different efficacy. It is highest for vitamin A (60-80%), vitamin B12, riboflavin, biotin and pantothenic acid (40-50%), vitamin D3 and vitamin E (15-25%). So the attention should be there for the economic production of high vitamin eggs.

The most of minerals particularly calcium and phosphorus are present in egg shell. So altering the calcium and phosphorus level of edible portion of egg (albumin and yolk) is very difficult. However, scientists have achieved the success in increasing the micro mineral contents of these portion especially selenium, iodine, zinc, copper and chromium by dietary supplementation. Iodine deficiency exists in many developing countries including India, so eggs could be a good source for its supplementation. Selenium level in eggs can be increased by incorporating the selenium yeast in diet of hens.

The yolk colour is the indicator of pigment content of egg and varied with dietary supplementation such as plants viz., marigold, chilli or corn, blue green algae spirulina. Recently in a study, it was found that high intake of carotenoids reduced the macular degeneration, a major cause of blindness in the elderly peoples.

An average sized egg contains approximately 200-220 mg of cholesterol. Many researchers have tried to reduce cholesterol level of chicken eggs by the use of genetics, nutrition or pharmacology intervention. Supplementation of chromium to laying hen diets at concentrations of less than 1 ppm have been shown to lower egg cholesterol and also improve the interior egg. The low cholesterol eggs can be produced by feeding a all-vegetarian diet rich in protein and fiber fortified with vitamin E.

Some polyunsaturated fatty acids (PUFAs) are an essential part of our everyday diet because our body cannot make them. Unfortunately, foods that are good sources of PUFA are often high in total fat. The essential PUFA include two main families and their derivatives. The omega-6 essential PUFA include linoleic acid and its derivative arachidonic acid. Small amounts ofomega-6 PUFA are found in wholegrains and meat from grain-fed animals. Some vegetable oils have lots of omega-6 PUFA. The omega-3 essential PUFA include linolenic acid and its derivatives EPA (Eicosapentanoeic acid) and DHA. Linolenic acid and its derivatives can be found in flaxseed and some fish. The beneficial effects of omega-3 fatty acids are faster development and enhanced functioning of brain, less chance of heart attack, better oxygen deliver to tissues and some support in rheumatoid arthritis, inflammatory disorders and other diseases. High content of this fatty acid also increases the keeping quality and shelf life of the eggs. Studies have also been conducted on the egg having the lower saturated and unsaturated fatty acid ratio by feeding the hen with canola oil.

In the advancement of biotechnology, we can produce genetically modified transgenic chickens which then produce the eggs containing the desired compound e.g., insulin for the treatment of diabetic patients.

Like many other laboratory animals, chicken can also produce antibodies that can neutralize the antigens of bacteria, viruses etc. These antibodies circulate in the blood and transferred to eggs for the protection of chicks. Researchers are trying to take the advantage of this fact and in future become successful to develop antibodies against battery of antigen and concentrate in egg. We can expect the designer eggs containing the antibodies (anti-venom) against snake venom.

The designer egg enriched with vitamins, minerals and other nutrients like fatty acids can be not only a good nutritional product but also a good vector for the delivery of pharmaceuticals and biological products like antibodies for human health. Despite all these promising prospects, there is a tendency among humans to resist change, particularly those of transgenic. Thus, the future of biotechnologically modified foods is at crossroads even after three decades of promising results. The future of the poultry industry is not producing more and more eggs but about producing more eggs with enriched nutrition. Thus, we can expect that in future poultry farmers may be the producers of “designer enriched eggs”.

What Does The Future Hold For The Poultry Sector ?

Importance of Oxidation Reduction Potential in Water for Poultry