The poultry industry is one of the largest consumers of antibiotics globally. Owing to the risk of increasing antimicrobial resistance, The European Union banned the use of antibiotics in food producing animals. However, they continue to be in use in other parts of the world. The emergence of multidrug resistant bacteria has been a cause for concern in poultry producers across the world. In the light of this crisis, scientists across the world are working to utilize microbial warriors as alternatives for antibiotics.

Bacteriophages are viruses that latch on to bacteria, replicate and destroy them from within. They kill bacteria and other microbial pathogens, but have no adverse effect on humans. They are remarkable because they have co-evolved with bacteria, and every single bacterium has a phage opponent that can be turned against it. Phages outnumber bacteria by a ratio of 10 to 1, and also play an important role in recycling the carbon in bacteria. They have both preharvest and postharvest applications in poultry production, and bacteriophage preparations are becoming increasingly commonplace in the global market. 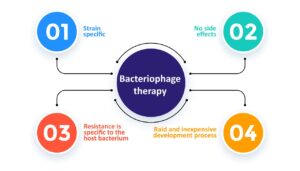 Excessive use of antibiotics to treat pathogenic bacteria not only increases antimicrobial resistance, but also can also affect intestinal microbiota,and cause dysbiosis, immunosuppression, and secondary infections. 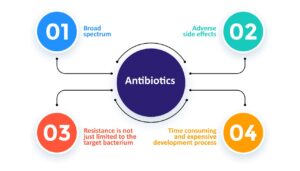 • Campylobacter – This bacterium is commonly found in the gut of birds, on account of their conducive body temperature. Although chickens are carriers, they don’t exhibit any clinical signs. Studies have shown a high prevalence of campylobacter in both layers and broilers. Campylobacter phages can reduce their abundance without affecting the gut microbiota. As of now, there have been no reports of phage resistant Campylobacter.

• Salmonella – The second most important zoonotic foodborne pathogen, salmonella infections can be grouped. The highest levels of salmonella positive samples are found in laying hens, breeding hens and broilers. Several outbreaks have been reported from India over the years, and researchers have successfully isolated antibiotic resistant profiles. Bafasal, a regulatory approved feed additive developed by Proteon pharmaceuticals, has a strong impact on food safety, with a high specificity towards Salmonella serovars, apart from improving feed conversion rate and reducing mortality.

• Escherichia coli – This gram-negative bacillus is a common inhabitant of the digestive tract of birds. Although most of the strains are non-pathogenic, certain pathogenic serotypes have been found to induce disease and cause mortality. It can act as both primary and secondary pathogen and E. Coli related infections are common among poultry of all ages and categories. Bacteriophages when used in combination with antibiotics, improved the effectiveness of colibacillosis treatments.

• Clostridium – This gram positive bacterium is ubiquitous and a common inhabitant of the gut microbiota of chickens. Both types of the bacterium produce toxins that can cause necrotic enteritis, which is the most financially devastating diseases in poultry flocks. It can also cause foodborne diseases, making it a potential public health concern. The synergistic effect of lytic phages in combination with bacteriocin have been shown to significantly reduce the bacterial population.

From legal regulations to biosecurity strategies, a number of approaches have been suggested to reduce the bacterial contamination in poultry facilities. Since the main source of meat contamination is the flock, we need to reduce their prevalence in chicken farms. Bacteriophage based disinfectants can be used as biosanitizers in farms, hatcheries, and transport crates. They are effective in inhibiting bacterial biofilm formation. Aerosol based sprays can also help prevent horizontal transmission of pathogens. In food processing plants, they can also be used to disinfect food contact surfaces, the skin of poultry carcasses, and in direct on-food application and food packaging.

Are they the future?

Antibiotic resistance is a problem that is not addressed enough. Once you have two microorganisms in a particular group that is resistant to an antibiotic, they reproduce in a short time span, and soon you have a generation of bacteria that are resistant to antibiotics. This makes bacteriophages the perfect ammunition to aim in the direction of bacteria. For diseases that are caused by only one type of bacteria, page therapy is the perfect option. If the disease is caused by more than one type, then we need a cocktail of phages that are specific to each of the infecting bacteria. While more progress remains to be made on this front, this is going to be the area of focus as we move towards a post-antibiotic era in poultry farming.

THE NOVEL USE OF FEED ADDITIVES IN POULTRY FARMING