What oxidative stress has to do with it, why it affects gut health, and how phytomolecules support mitigation strategies*

Stress in animals can be defined as any factor causing disruptions to their homeostasis, their stable internal balance. Stress engenders a biological response to regain equilibrium. We can distinguish four major types of stress in the poultry industry: technological or management-related stress; environmental stress; nutritional stress, including due to heavy metals, mycotoxins, and low-quality ingredients; and internal stress, which is related to health status and health challenges. All types of stress lead to molecular and cellular changes that decrease health and productivity.

The optimum temperature for poultry animals’ well-being and performance – the so-called thermoneutral zone – is between 18 and 22°C. When birds are kept within this temperature range, they do not have to spend energy on maintaining a constant body temperature.

Heat stress is the result of unsuccessful thermoregulation in the animals, as they absorb or produce a higher quantity of heat than they can lose. It means that there is a negative balance between the net amount of energy flowing from the animal to the environment and the energy it produces.

This energy imbalance is influenced by environmental factors such as sunlight, thermal irradiation, air temperature, humidity, and stocking density, but also by animal-related factors such as body weight, feather coverage and distribution, dehydration status, metabolic rate, and thermoregulatory mechanisms. When the environmental temperature is above the thermoneutral zone, the animals activate thermoregulation mechanisms to lose heat through behavioural, biochemical, and physiological changes and responses.

Heat stress can be classified into two main categories, acute and chronic. Acute heat stress refers to a short and fast increase in environmental temperature (a few hours), whereas under chronic heat stress the high temperatures persist for more extended periods (several days). Some studies suggest that, in some circumstances, poultry animals show a degree of resilience to acute heat stress. However, in the long run, their compensatory mechanisms are not sufficient to maintain tissue integrity and thus health and performance.

The animal’s response to heat stress

The exposure of poultry to heat stress changes the gene expression of cytokines, upregulates heat shock proteins (HSP), and reduces the concentration of thyroid hormones. When heat stress persists, these cascades of cellular reactions result in tissue damage and malfunction. 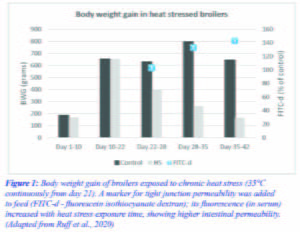 The animals exposed to heat stress suffer adverse effects in terms of performance, which are widely known and include high mortality, lower growth and production (Figure 1), and a decline in meat and egg quality.

Oxidative stress, simply put, occurs when the amount of reactive oxygen species (ROS – such as superoxide anions, hydrogen peroxide, and hydroxyl radicals) exceeds the antioxidant capacity of the cells. Oxidative stress is regarded as one of the most critical stressors in poultry production as it is a response to diverse challenges affecting the animals.

At a cellular level, the metabolism of the animal – its energy production – generates ROS and reactive nitrogen species (RNS), such as hydroxyl radicals, superoxide anions, hydrogen peroxide, and nitric oxide. These usually are further processed by antioxidant enzymes produced by the cell including superoxide dismutase (SOD), catalase (CAT), and glutathione peroxidase (GSH-Px). Nutrients such as selenium and vitamins E, C, and A also participate in antioxidant processes. When the generation of ROS exceeds the capacity of the antioxidant system, oxidative stress ensues.

Heat stress leads to higher cellular energy demand, promoting the generation of ROS in the mitochondria, which exceed the antioxidant capacity of the organism. Consequently, oxidative stress occurs in several tissues, leading to cell apoptosis or necrosis. Among these tissues, the gastrointestinal tract can be highly affected.

Oxidative stress damages cell proteins, lipids, and DNA, and reduces energy generation efficacy. Moreover, oxidized molecules can take electrons from other molecules, resulting in a chain reaction. If not controlled, this reaction can cause extensive tissue damage. 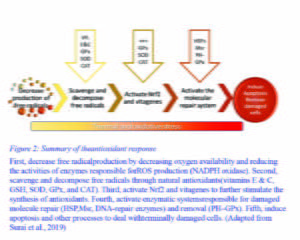 In response to oxidative stress, all antioxidants in the organism work together to re-establish homeostasis. Several steps in the oxidative stress response have been identified. Whether they take place depends on the intensity of the stressor, with ROS and RNS acting as signalling molecules. These steps include the internal synthesis of antioxidants, the activation of transcription factors or vitagenes, and the production of protective molecules.

Oxidative stress’ effects on the gut

In the gastrointestinal tract, oxidative stress and the consequent tissue damage lead to increased intestinal permeability. This facilitates the translocation of toxins and pathogens from the intestinal tract into the bloodstream (Figure 3). 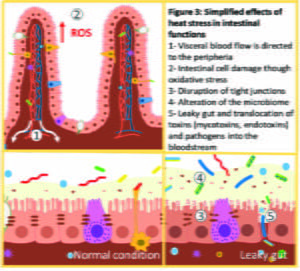 Several studies indicate that both acute and chronic heat stress increase gut permeability, partly by increasing oxidative stress and by disrupting the expression of tight junction proteins. Heat and oxidative stress in the gut result in intestinal cell injury and apoptosis. When the tight junction barrier is compromised, luminal substances leak into the bloodstream, which constitutes the condition described as “leaky gut”. 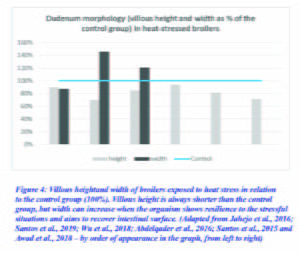 Due to reduced feed intake and impaired intestinal function, the presence and activity of the commensal microbiota can also be modified. Heat stress can lead to reduced populations of beneficial microbes. At the same time, it can boost the growth of potential pathogens and lead to dysbiosis, increased gut permeability, as well as immune and metabolic dysfunction. Burkholder et al. (2008) and Rostagno (2020) point out that pathogens such as Clostridia, Salmonella, and coliform bacteria increase in poultry exposed to heat stress, while the populations of beneficial bacteria such as Lactobacilli and Bifidobacteria decrease.

Heat stress causes damage in the gut microbiota, intestinal integrity, and villus morphology, as well as immunosuppression. Consequently, feed digestion and absorption decline. These factors increase the risk of necrotic enteritis outbreaks , one of the most problematic bacterial diseases in modern poultry production.

In a study by Tsiouris et al. (2018), cyclical acute heat stress was found to increase the incidence and severity of necrotic enteritis in broilers challenged with C. perfringens, and to produce the disease in animals that were not exposed to the bacteria. Other signs, such as growth retardation and a reduced pH of the intestinal digesta, were also observed in the heat-stressed birds.

Most intervention strategies deal with heat stress through a wide range of measures, including environmental management, housing design, ventilation, sprinkling, and shading, amongst others. Understanding and controlling environmental conditions is always a part of heat stress management: it is crucial for ensuring animal welfare and achieving successful poultry production.

Feed management and nutrition interventions are also recommended, together with environmental management, to reduce the effects of heat stress. They include feeding pelletized diets with increased energy, higher fat inclusions, reduction of total protein, supplemental amino acids, higher levels of vitamins and minerals, and adjusting the dietary electrolyte balance. Nutrition is crucial, and the use of the right diet’s aids in attenuating heat stress in birds.

It is practically impossible to avoid stress in commercial poultry production; hence it is common for animals to experience oxidative stress at times. Phytomolecules are natural antioxidants with anti-inflammatory and digestive properties, which have been shown to improve poultry performance, including during challenging periods. The antioxidant capacity of phytomolecules manifests itself in free radical scavenging, increased production of natural antioxidants, and the activation of transcription factors.

As compounds that have low bioavailability, they can remain at high concentrations within the intestine, when provided at the appropriate dosage and through encapsulation technology. Research has found that phytomolecules can effectively reduce intestinal ROS and thus alleviate heat stress in poultry, specifically mitigating oxidative stress in the intestine.

One heat stress study, for example, found that carvacrol elevates serum GSH-PX activity, compared to non-supplemented broilers. Other studies demonstrate that cinnamaldehyde also increases the activities of natural antioxidants in heat-stressed broilers. A study by Prieto and Campo (2016) showed that dietary supplementation of capsaicin effectively alleviated heat stress, as indicated by a lower H/L ratio in supplemented animals.

Silibinin, a flavonolignan present in silymarin (milk thistle extract), is another powerful antioxidant. In the gastrointestinal tract, it can come into direct contact with cells, activating transcription factors such as Nrf2, and thus helping to upregulate the antioxidant protection. Other phytomolecules, such as menthol and cineol, also aid animals under heat stress by simulating the sensory cold receptors of the oral mucosa. This gives them a cooling sensation and reduces heat stress behavior.

• Heat stress is a common reality in poultry production, its effects are quite complex and harmful and depend on the intensity and duration of the exposure to high temperatures.
• The gut is affected by heat stress through several pathways, including organ ischemia and hypoxia, as well as oxidative stress.
• In heat stress challenges, the intestinal barrier is compromised because of lower tight junction protein expression, enterocyte damage, and microbiome unbalance, leading to gut health issues such as dysbiosis and necrotic enteritis.
• At the gut level, phytomolecules such as carvacrol, cinnamaldehyde, capsaicin, silymarin, cineol, and menthol, among others, have been found to alleviate heat stress through their antioxidant capacities, leading to improved animal health and performance.