The president of poultry Federation of India Mr Ramesh Kumar Khatri today presented a memorandum to the Deputy Commissioner of Sonepat,Dr Ansaj Singh on behalf of the Federation which was farwarded to the Prime Minister of India Mr Narender Modi to save the poultry Industry which is on the verge of destruction. 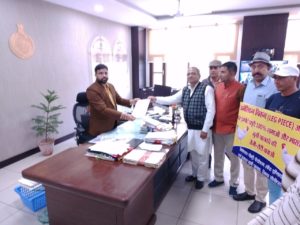 After submitting a memorandum to the Deputy Commissioner,Mr khatri expressed apprehension that Government of India is planning to reduce the imported duty on chiken leg and this decision would destroy the poultry Industry of the country .He was of the view that by reducing the duty the poultry Industry would not be able to survive for long as the poultry sector has suffered a huge loss since last one year as the prices of raw material had increased manifold.

He further said that if the import duty which was being leveid 100 percent at present would be reduced it would adversely affect the poultry Industry.He further maintained that if the American chicken industry would be promoted than it would be very difficult to save the self made poultry farming sector worth Rs one Lakh crore and providing job opportunities to over two crore people of India.

The president asserted that the import duty should not be lowered from 100 percent to save the poultry sector. He expressed reservation and pointed out that that the raw material including the prices of maize,Bajra and oil seeds had increased substantially which had adversely affected the poultry Industry.while detailing out the loss in the sector,he apprised that the cost of production of an egg is pegged at Rs four and 10 paise and the whole sale price of an egg in the market is Rs 3.50 per egg thus the industry is facing acute loss since last one year. He urged that a level playing field be given to the industry. He also demanded that the feed of Bajra and Maize be provided at the lower import duty as the India was the largest consumer of the raw material.He further said that the poultry sector had great hope from the prime Minister Mr Narender Modi as he had done a lot for the farmers of the country . with a view to double the farm income ,a number of schemes had been launched including Prime Minister Farmers Samman Scheme, besides providing rumenrative prices of their produce .Under the Scheme a sum of Rs 6000 were being given to the farmers in three instalments in a year.About 12 crore farmers were getting benefit of this innovative schemes. He revealed that about 26crore eggs were being produced in india daily and about 50lakh units were working in the country and which about 4crore people were engaged in this sector through out the country including medicine and equipments. 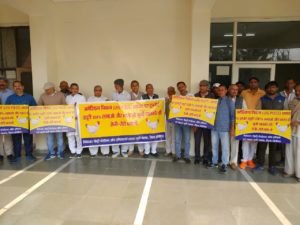 He hoped that the Prime Minister would protect the interests of poultry farming community and urged that the import duty should not be reduced from 100 percent rather it should be interested to save farming community of the country with out any political pressure to be exerted during the visit of present of America Donald Trump.