Maize and soya de oiled cake are major ingredients used in poultry feed, contributing the greatest input cost for poultry production. In the past year, the price of maize rose by 70%, and soya de oiled cake remained high. This was due to an increased support price for farmers and low availability of these ingredients due to various reasons. Poor crop yield, lack of adequate storage facilities, panic buying, erratic rainfall and fall armyworm infestation created a surge in the price of these ingredients, resulting in higher feed costs and cost of production of animal products.

To give an impression of how the kharif crop will look over the next few months, Alltech India team members visited many key production areas of these ingredients. They spoke to farmers to understand their concerns and investigate the quality and supply of these key ingredients to the animal feed industry.

It was observed that lower acreage sowing by farmers, heavy rains at time of harvest and fall armyworm infestation had resulted in poor yield of maize and soya crops. Soybean Processors Association of India (SOPA) has estimated that soya crop output will be around 8.8 million metric tonnes in 2019, compared to approximately 11 million metric tonnes in the previous year, which is almost 20% less.

Further, maize and soybean samples were collected from the Indian states Karnataka, Maharashtra, Telangana and Madhya Pradesh during the first week of November 2019. These were assessed for quality, yield and risk associated with these in the feed chain. Samples were tested using the Alltech 37+® mycotoxin analysis,which assessed the mycotoxin contamination in these ingredients using the LCMS-MS method.

Maize moisture was high due to rains, and grain quality was poor due to fall armyworm and fungal infestation.

The most present contaminant was fusaric acid (96.7%) followed by aflatoxins (83.3%), type B trichothecenes (70%) and fumonisins (66.7%). Some samples also contained ochratoxins, citrinin and ergot toxins, as well as many other types of mycotoxins produced by Aspergillus and Fusarium species, which go unnoticed under typical testing procedures.

Risk Equivalent Quantity (REQ) was calculated for maize when used in poultry feeding. It was observed that 70% of maize samples were at high risk. Overall, aflatoxins and type B trichothecenes were significant mycotoxin risks. 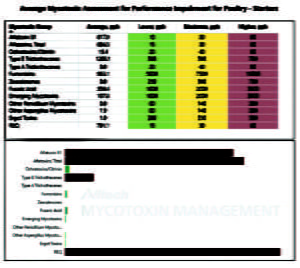 A potential loss of 18.15% in feed conversion and 0.32 eggs/hen/week may occur when such maize is used in broiler and laying birds 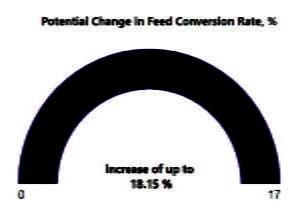 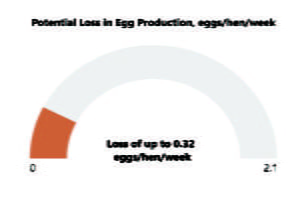 Summary of the survey: