The poultry Industry in India has transformed into vibrant agribusiness with an annual turnover of more than 1,15,000 crores to the Indian GDP (ICRA estimate, 2018).  India is the fourth largest broiler producer in the world producing 4.9 million tonnes of broiler meat (USDA, 2019) annually and third largest producer of eggs accounting over 90 billion eggs every year. The poultry flocks are scientifically and humanely reared to   get optimum performance on par with the international standards.

Chicken is the most preferred meat in India compared to mutton (sheep / goat meat), fish, pork and beef since the other meats’ consumption is affected by factors such as high price (mutton), seasonality (fish) and religious taboo.   With increasing disposable income, changing lifestyle and with over 65% of India’s population below 35 years of age, significant increase in   consumption of chicken and eggs is anticipated in near future. Hence, the Poultry industry should anticipate challenges that may hinder the rapid expansion of poultry production and should find solutions to such challenges in the coming years.

Globally majority of the countries are growing Genetically Modified (GM) maize and soybean. The cost of GM maize in US and Brazil is in the range of INR 10 to 11 per kg, whereas the Indian poultry farmers are paying at least double their prices.  Similarly, the cost of GM soybean meal in US and Brazil is INR 20 to 22, whereas Indian poultry farmers are paying about INR 40 per kg.  This results in higher input costs for production of meat and eggs in India compared to many other countries.  In addition, we are now facing the possible threat of chicken from US and Brazil being exported into India, which will make it difficult for Indian poultry producers to compete.

Hence, the top priority for all the poultry stakeholders today is to convince the government to permit us to cultivate GM maize and soybean keeping in pace with the future anticipated demand of raw materials, which is necessary to ensure protein security of Indian population .  We can take the cue from the erstwhile agriculture industry where India used to be a net importer of cotton about 20 years back. India’s first and only GM crop, BT Cotton, was approved for cultivation in India in 2002.  Since then, our country’s cotton output has increased nearly four-fold from 1.61 billion kgs to 6 billion kgs.  After introduction of GM cotton (BT Cotton), India’s production increased significantly and today India is the world’s largest exporter of cotton.

Our Poultry Industry Associations, policy makers and specialists in this area should take note of views of the one hundred and seven Noble Laureates who signed a letter on June 30th 2016 calling on Green Peace, a multi-national environmental NGO, and its supporters to “cease and desist” in their campaign against GM crops and urging Governments to reject opposition to Vitamin – A fortified GM Rice in particular and GM crops in general.

The signatories say scientific and regulatory agencies around the world have repeatedly and consistently found crops and foods improved through biotechnology to be as safe as, if not safer than those derived from any method of production.    The Nobel Prize winners say there has never been a single confirmed case of a negative health outcome for humans or animals for their consumption.  Their environmental impact has been shown repeatedly to be less damaging to the environment, and a boon to global biodiversity.  They have vowed to do everything in their power to oppose Green peace action and accelerate the access of farmers to all the tools of modern biology, especially seeds improved through biotechnology (Vivian Fernandes). 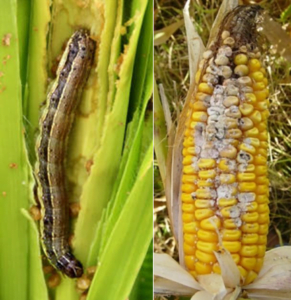 Over the last on year, Fall armyworm infection of maize crops in India brought down the yield per acre, which resulted in substantial increase in maize prices.  This pest attacks only non-GM maize crop and doesn’t attack GM maize crop, which is the additional benefit of   allowing cultivation of GM cultivation.

Approximately 20 to 30% of poultry feed is undigested & wasted. The undigested feed promotes pathogen multiplication in the gastro-intestinal tract, which leads to poor health, performance and economic loss. This can be overcome by enhancing feed digestion by use of enzymes such as Protease, Xylanase and Phytase. Xylanase enzyme applied on to feed have been useful in bringing down the viscosity of the ingesta, thereby promoting both digestibility and absorption of nutrients, which reduces  fee cost of production, better health of birds,  and reduces  nitrogen excretion into environment.

Use of alternative energy sources:

India’s poultry sector has grown significantly over past two decades, mainly due to application of scientifically proven rearing and feeding practices.  The intensive farming practices depend on modern genetic breeds, scientific management, biosecurity and access to feed raw materials at lower prices.  Feed comprises of approx. 70% of the chicken production cost and hence, for profitable production, effective collaborations has to be established across different stakeholders including government and poultry associations to influence policy makers especially in the areas of taking up trials for GM crop cultivation, which is critical for supporting supply to poultry meat and eggs at affordable price to consumers.