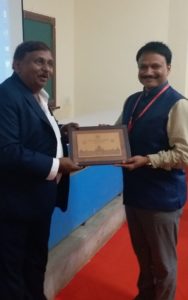 Dr. Mahesh P.S. Director, CPDO&TI as an invited Speaker presented a talk at Indian Science Congress on the topic “Meeting human Protein needs through Poultry”. In this presentation, Dr. Mahesh elaborated on present context of Global Burgeoning population putting a stress on need of food for the large human population on the globe. It was narrated that Scientists should produce for the next 40 years which was being produced for the last 8,000 years of agriculture. The global population has spiked from 2 billion in 19th Century to almost 9 billion in the present century.

India with a three trillion economy, with young population of 65% touching 1.35 billion population is a growing economy with agri-based attractive markets. Indian Animal Husbandry sector poised for a sustained growth has been No. 1 in Milk production (190 MMT), No. 3 in egg production (90 billion eggs) and No. 5 in Chicken Meat production (4.5 MMTs) globally. The contribution from Animal Husbandry sector is estimated to be about 12 lakh crores with poultry contributing nearly 1.2 lakh crores to the GDP.

Indian food habits over the years have gone for a paradigm change with a more focus on carbohydrate centric diet, making more than 70% population as protein-deficient. A slide depicting what India has ordered from a private food aggregator was shown. It was well established that 2 million orders were placed from a single online app per day. Interestingly, Chicken Biryani topped as a most ordered food along with Chicken Fried Rice and Mutton Biryani in the list of consumer preferences. This is an indication as a tip of the iceberg of increased focus on quick foods over planned diet.

Human body consists of 60% as water, 20%as fat and 20% as protein elements other than the trace minerals etc. An adult individual, as per the scientific recommendation is required to consume 0.8 – 1.0 gm per kilo body wt. as a mandatory daily protein requirement. However, most of the Indian diets are not suited to meet this. Dr. Mahesh in his presentation showed the diet of Michael Phelps, World Swimming Champion, Usain Bolt, the fastest man on the earth and Hima Das, the Golden Girl of India making chicken and egg as their staple diet. 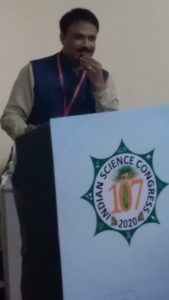 Chicken and Egg are products of poultry sector produced from agricultural products namely Corn and Soya. An egg weighing 50 – 55 gms would yield minimum of 6 gm protein as a complete protein supplement for an adult. Every 100 gm of egg (2 eggs per day) consumed could supplement 12.56 gm of protein daily. Similarly every 100 gm of chicken (2 chicken piece per day) could supplement 18.6 gm of protein daily. As per the International Egg Commission, Egg is the only protein source with 97% protein true digestibility in the body.

Further, Dr. Mahesh narrated Indian Poultry Sector producing 1.1 crores broilers per day and 26 crores eggs per day with an year on year growth of 8 – 10 percent in broilers and 4 – 6 percent in layers. The trends in the market being broiler could attain 2 kilo body wt. at 32 days with an efficient FCR of 1.4 – 1.5, layer bird being an efficient producer of 330 eggs with a slim body wt. of 1.3 kilos annually.

In the presentation, the lessons from the other sectors were shown as an example for marketing poultry produce. The success of branding in Atta, Corn snacks, potato snacks, coffee, tea and the branding of Amul was well narrated. The trend-setters in the poultry sector namely Licious, Fresh to Home, Nandu’s, Happy Hen Farms, Suguna Fresh, Venky’s Express etc., are the leading examples of success in marketing poultry produce.

The present day generation spends 2.5 hrs daily in Social Media and 1 hour 11 minutes in youtube as per the report in Economic Times. The Tik-Tok is the most downloaded app in the present times against youtube. Poultry sector need to catch this and create ads in these social media platforms. It was advised that. Poultry sector can focus on corporatization of sports other than cricket like Football, Badminton, Table Tennis etc., wherein chicken and egg are highly essential to meet the protein requirements of sports persons.

Poultry Sector is aggressive in these years by publishing ads which draw the attention of the consumer by putting full page ads in the leading news papers. The top iconic figures are also hired for branding and marketing. Veterinarians in Poultry (VIP), an association of veterinarians has set the trend of doing Eggchithon – Walkathon in various metros highlighting the benefits of egg and chicken. The suggestion was also made for use of Artificial Intelligence and Virtual Reality tools in schools to promote benefits of chicken and egg. The presentation concluded with a hope that Niti Ayog in its recent report is exploring for inclusion of Egg, Fish and Meat in PDS.

INFECTIOUS BURSAL DISEASE IN POULTRY, ITS DIAGNOSIS, TREATMENT AND CONTROL