There are many, well known herbal formulations available in market to cure respiratory distress in poultry. One of such polyherbal formulations (RESPONSE; M/s Noble Vetscience, Pune) was tested in present study for its efficacy during experimental respiratory distress. The mode of action of RESPONSE is based on the breakthrough Science of Life Energy which is proven through extensive research and field trials. The Phytogenic extracts used to formulate RESPONSE are Atropa Belladonna (Deadly nightshade), Drosera Rotundifolia (Common sundew), Zingiber officinale (Ginger) and Passiflora incarnata (Maypop) , fortified with natural vitamins and minerals.

RESPONSE works on restoring the obstructed flow of Life energy in the alveolar cells (lungs) and respiratory tract epithelial cells by clearing the pathogens and debris at cellular level.

The energized Phytogenic extracts of RESPONSE help to relieve respiratory distress by reducing the mucus secretion, clearing the respiratory passage, improving oxygen carrying capacity of lungs, and improving the supply of oxygen to blood and the brain.

A study was conducted at KNP College of Veterinary Science, Shirwal to assess the Efficacy of ‘RESPONSE’ on induced respiratory stress in broiler chicken. One day old broiler chicks (128) were divided in four treatment groups of two replicates each as follows-

All birds were reared under standard management practices like feeding, watering, medications and vaccination in all groups for 42 days of age. Throughout the trial feed and water were offered ad-libitum. The induction of respiratory stress was done fourth week onwards.

100% chicks were selected from each treatment group to evaluate the parameters, viz.: clinical symptoms of respiratory distress, average body weight (pen wise) and mortality. Histopathological study was performed to check the effect of respiratory stress on respiratory organs. 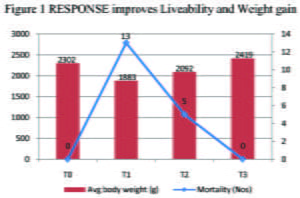 The mortality recorded varies within different groups. As shown in Figure 1, zero mortality was recorded in T0 Control group and T3 i.e. RESPONSE group. T1 group is showing significantly (P<0.01) higher mortality i.e. 13 as a consequence of induced respiratory stress. This is quite obvious since the birds are challenged to respiratory stress and reared without any treatment to reduce the induced stress. However group T2, supplemented with RESPONSE fourth week onwards after induction of respiratory stress, is showing significantly reduced mortality (5) as compared to T1 group. This indicates improved liveability of birds in group T2 as a result of RESPONSE supplementation. 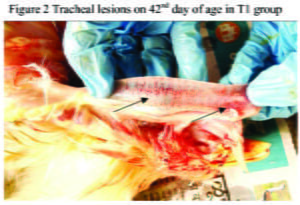 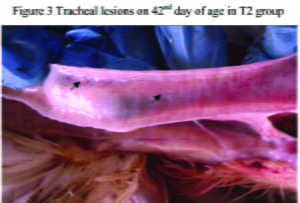 In case of body weight gain, continuous use of RESPONSE from day one significantly (P<0.01) improved body weight (2419 g) in T3 group as compared to T0 Control group (2302 g).  This indicates that RESPONSE elicited growth promoting effect as well. This extra weight gain of 117 g is quite significant from commercial point of view. However T2 group treated with RESPONSE during respiratory distress revealed significantly (P<0.01) increased body weight (2092 g) as compared to non treated T1 group. The body weights of different groups are presented in Figure 1. 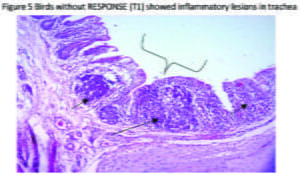 Results of present study indicate that addition of RESPONSE helps to control the respiratory stress very effectively. RESPONSE, if given as a dietary supplement from day one till liquidation of flock can improve overall performance of birds by enhancing body weight and reducing mortality. RESPONSE, a polyherbal dietary supplement is effective in all types of respiratory problems and can help in early recovery of birds against respiratory distress.