As part of its commitment to serve people and to improve the nutritional status of children, Alltech initiated its Nutri Milk Project in November 2017, partnering with the Thribhuvandas Foundation in Anand, Gujarat, to supply milk to young students in the region.

If we could give every individual the right amount of nourishment and exercise, not too little and not too much, we would have the safest way to health.” – Hippocrates

India is the second-most populous country on the earth and is home to more than 400 million children, who account for 37 percent of the entire population of the world. Unfortunately, India is no exception to the global struggle to feed its younger generations a nutrient-dense diet. Around 73 percent of all Indian diets are protein-deficient, and the shortfall is even more alarming among vegetarians (IMRB survey, 2017).

The Indian Council of Medical Research (ICMR) recommends a daily intake of 200-300 grams of milk for children, and many states are still striving to achieve this goal. India is a leading producer of milk, but, in many regions, elevated agricultural performance does not necessarily equate to an improved diet.

As part of its commitment to serve people and to improve the nutritional status of children, Alltech initiated its Nutri Milk Project in November 2017, partnering with the Thribhuvandas Foundation in Anand, Gujarat, to supply milk to young students in the region.

“It is an absolute honor to be associated with Thribhuvandas Foundation in this project,” said Dr. Aman Sayed, managing director of Alltech India and regional director of Alltech South Asia. “As a nutrition company, we feel it is our responsibility to provide practical and proven solutions to enhance the nutrition level of children, who are tomorrow’s future.”

Alltech initiated the project in Gujarat, a mostly vegetarian state where milk is the main source of animal protein. Milk, a whole food that provides many essential nutrients, is a crucial part of the diet of growing children in this region. In the selected schools, 98.5 percent of school children can be categorized as undernourished on the body mass index (BMI) scale.

Five schools in the Tarapur cluster were selected for the program, as children in this region were noted to be especially malnourished. Alltech began providing 150 ml each of flavored, fortified milk every day to around 1,200 children, aged 5 to 13, as well as a weekly supplement of iron. The sole aim of this is to improve the nutritional status of these children — and, by doing so, to build a healthier India. On its journey to nourish the children of Tarapur, Alltech has delivered 1,78,754 milk pouches in the project’s first year alone.

Along with a 5.45-percent average improvement in the BMI of their students, the schools involved in this program have also experienced a considerable increase in attendance. These results inspired Alltech to expand the project, and in 2018, six more schools were added. Alltech plans to expand the program even further.

“Childhood is a critical time in the growth and development of a person and is a key stage in the establishment of their physical and mental abilities,” said Sayed. “We are proud to see the positive impact Alltech is having on the lives of children in the program. These children are benefiting daily from Nutri Milk, not just by improving their nutrition but by increasing their attendance and education, and this is a proud moment for Alltech. 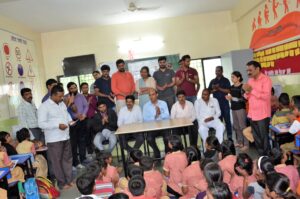 ” Alltech is committed to improving the health and performance of people, animals and plants around the world through natural nutrition and scientific innovation. At a global level, Alltech works extensively with local schools to build science labs and encourages students to pursue science with a greater curiosity about the world around them.

Vamso Biotec organizes expert talk on: "Strike through the CHALLENGE"