Scalding in poultry is the process of treating carcasses with hot water or steam to loosen the feather from the follicle to aid their removal.  Usually scalding is done by the process of immersing the birds in warm water. The time and temperature of the heat treatment are primarily determined by the need for efficient removal of the feathers by the de-featherer. At too low temperature, the feathers will not be loosened and too high the temperature, the skin will be cooked and it will be difficult to remove the feathers and there is also a risk of denaturation and shortening of the outermost layer of muscle.

In a small plant, scalding can be performed manually (i.e., placing the carcasses in and removing them from a scalding tank), but in large plants it is done in a continuous manner whereby the birds are dipped in a single or multistage scalding bath while suspended from a moving shackle line. The water can be is heated by oil, gas, electricity or an open steam-pipe. Alternatively vertical cabinets utilizing hot-water sprays or steam can be used. Temperatures of 50–51 °C for 3.5 min are employed for ‘soft’ scalded chicken carcasses destined for chilling, or 56–58 °C for 2–2.5 min for ‘hard’ scalded carcasses destined for freezing (Mountney, 2001).

There are various scalding schemes, selection of one over another depends on the degree of difficulty in removing the feathers, the chilling method that is to follow (water, air), and the age of the bird. Higher scalding temperatures are better for loosening feathers from their follicles, but hard scalding is also the harshest on the skin (the outer layer of the skin, epidermis, becomes loose and is later removed during the plucking operation). The removal of the epidermis can result in discoloration of the skin if it is dehydrated during subsequent air chilling. However, hard scalding is the only satisfactory way to release the feathers of waterfowl. Generally speaking, hard scalding does not cause as much discoloration in the thick skin of waterfowl as it does in young poultry (usually 7 weeks of age). Soft scalding/semi-scalding is commonly used for young broilers and turkeys since it does not damage much of the epidermis, but still allows for relatively easy feather removal. Adequate agitation of the scald water and uniform temperature are essential to ensure good feather removal. (Barbut, 2002)

The carcasses are submersed in a bath of hot water which serves to denature the protein structures holding the feathers in place and loosens the feathers without causing appreciable damage to the outer skin layers, the stratum corneum or “cuticle”. Because it leaves this waxy, yellow-pigmented layer of the skin intact, soft scalding is the preferred scalding method for producing fresh poultry with a yellow skin exposed. Such skin color is highly desired in some parts of the world as indicating a healthy bird.

Methods of Scalding are:-

1. Soft scalding/semi scalding entails scalding for 60 to 180 s in water at 50 to 51◦ This method leaves the epidermal layer intact, which is why it is commonly used for young broilers and turkeys but still allows for relatively easy feather removal (Fletcher. 1999). Birds slaughtered for display should be scalded in this way to improve the appearance of the carcass, since water that is too hot will cause the outer layer of skin to loosen or be lost. Such loss also results in the loss of some yellow pigment from the skin.

2.Sub scalding/medium scalding is used for mature birds, and involves using water at 54 to 58◦C for 60 to 120 s. The epidermal layer is broken down by this time–temperature combination, and the feathers are usually much easier to remove.

3. Hard scalding/full scalding requires a water temperature above 56-60◦C for 45 to 90 s. This method is faster and eliminates pinfeathers, but the birds tend to dry out and have a less desirable appearance. It is easier to remove the feathers from carcasses scalded at this temperature than from those scalded at lower temperature, but the flesh of such poultry is “doughy” and lifeless and the skin becomes discolored soon after processing. As a result, the carcass must be kept covered with a packaging material or moist with ice or water. Waterfowl may be scalded at this temperature because it is the only satisfactory way to release feathers, while the skin of waterfowl does not discolor as readily as do other species of poultry.

Careful equipment design is required for meat hygiene. Since 1 g of soil material (e.g., dirt, faecal material) attached to the feathers can contain 108–109 microorganisms, it is important to minimize cross-contamination in this common bath. Maintaining and controlling the temperature is one of the key features to keep bacterial load under control. Another means is the use of a counter flow design (clean water introduced at the exit end of the tank, and water flow towards the entrance where the more contaminated birds are introduced).

Installing a multistage scalding tank system can further reduce contamination problems; this would consist of 2–4 water tanks, where the carcasses are moved from the initial, more contaminated bath, to the cleanest bath at the end. Lillard (1973) reported that when scald water contaminants enter the broiler’s respiratory system during immersion scalding, they can be spread to the circulatory system and to the internal organs, and possibly throughout the entire carcass.

Common Scalding Times and Temperature for Various Classes of Poultry

Variables requiring consideration during the scald process step are mechanical, physical, and chemical. Mechanical variables include counter-current flows and agitation to produce a washing effect. Counter-current systems move water counter to the direction of poultry carcasses at all points. Water enters the system at the point where poultry carcasses exit, and water exits at the point where poultry carcasses enter, producing a dirty-to-clean gradient that continually moves poultry carcasses into cleaner water. Cleaner water is a relative condition as the amount of dry matter and microorganisms in the scald water increase over time. Physical variables are time and temperature, which influence washing and antimicrobial effects. The chemical variable is pH, which also influences the antimicrobial effect.

Steam-spray scalding is a less popular alternative. Klose et al. (1971) and Dickens (1989) found that a mixture of steam and air at 50 to 60°C and 137.9 kPa pressure applied for approximately two minutes provided a uniform scald of either dry or damp broilers, facilitated feather removal, and yielded carcasses microbiologically equivalent to immersion systems. Some religious dietary laws prohibit scalding and soak poultry carcasses in cold water. 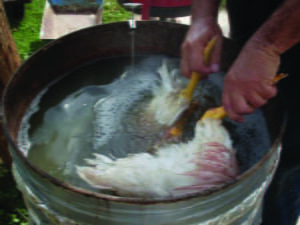 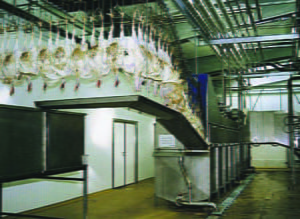 b. Salmonella and Campylobacter are the most common pathogenic microorganisms identified with the scalding process step.( Berrang et al. 2007)

e. Failure to maintain a proper time/temperature combination diminishes the desired technical effect of preparing feathers for removal and detracts from sanitary dressing.

f. Increasing scald water temperature to increase the death rate of bacteria may not be a management option, however, because higher temperatures also affect the skin’s appearance, color, and cooking characteristics. Any unnecessary heating of scald water also has an economic cost. High scald temperature can cause the carcass to become oily, which favors the retention of microorganisms on the carcass surface.

d. Increasing scald water pH from 7 to 9, reduces microbial levels in the water,(Humphrey and Lanning 1984)

Conclusion :
Scalding is one of the major process employed during poultry slaughter for removing feather from the skin. Careful equipment design and processing conditions are required for scalding of poultry, because during this process carcasses are come in contact to each other and act as a chance source of contamination. Since very small quantity of soil material (eg:- dirt, faecal material) attached to the feathers can contain 108 to 109 microorganisms, it is important to minimize cross contamination in this the common scalding tank. Maintaining and controlling the temperature is one of key feature to keep bacterial load under control and also important for maintaining the level of muscle degeneration, colour of carcass, temperature of carcass, cooking characteristics and appearance of skin. For quality poultry meat production, method of scalding and temperature selection is needed to be studied.