The 2019 edition of VIV Asia, held over 3 days from 13th to 15th March in Bangkok, attracted more than 45,000 professional visits, confirming the big attendance of the previous appointment.

Already known since 2017 as the n.1 international trade show from Feed to Food in Asia, VIV Asia 2019 took another step forward in strengthening its international character with a 7% increase of visits from outside of the hosting country. The enthusiasm and energy distinguishing the Feed to Food Asian markets resonated at BITEC throughout the show time, giving all attendees another memorable experience at VIV Asia.

When looking at the livestock and feed to food markets in Asia, VIV worldwide offers the strongest network of industry professionals, with VIV Asia leading the VIV series of events.

A good 65% of the total 45,023 visits registered at VIV Asia in 2019 came to Bangkok from outside of Thailand, confirming the international flavour of this show where local visitors counted this time for 35%, against the 39% Thai visits audited in 2017. With Asian markets in the lead, overseas visitors came from more than 120 countries.

China, once again the first visiting country after Thailand, significantly increased its attendance by 12% compared to the previous edition. Following China, the top 10 visiting markets this year were: India, the Philippines, Vietnam, Indonesia, Malaysia, Bangladesh, Republic of Korea, Taiwan, and Pakistan. Interesting to note, Cambodia claimed in this edition a place in the top 20 visiting countries completing more and more the ASEAN markets coverage at the show. Despite the air space closure affecting visitors’ attendance right before the show dates, Pakistan managed to confirm its 11th position in the visiting countries’ list. Some others in the top 20 were Myanmar, Japan, Nepal, and Iran.

VIV Asia goes more and more international not only in terms of visitors but also with regards to the exhibiting offer. As announced before the show opening, 1,245 exhibitors (+18% compared to 2017) from 62 countries, covered at BITEC a space of 31,007sqm net (+30% compared to 2017) where 10 international pavilions showcased a number of new companies and brands. In particular, the Canadian and Japanese pavilions proudly marked their new entry into VIV Asia line up in 2019, next to the recurring pavilions from Belgium, China, France, South Korea, Spain, Taiwan, Thailand, and the United States. Finally, new exhibiting countries represented by individual companies were: Cyprus, Ecuador, Finland, Jordan, Lithuania, Morocco, Myanmar, Paraguay, Tunisia, and Uruguay.

A complete event from feed to food which greatly satisfied expectations

A thorough survey ran by the organizers in the 10 days following the show, has just revealed a satisfaction rate of 8.1 points out of 10, among VIV Asia 2019 exhibitors, and 8.6 among the visitors. The latter spent in fact more time at the show ground, with second and third day re-visits increased by 3% compared to 2017. So what were some of the winning features of this industry’s appointment?

Extensive program & complete value chain on display. Visitors attending VIV Asia, not only did they find the A to Z / Feed to Food offer on display at the show ground, but also a wide range of conference and seminar programs to learn, network, and share knowledge. 86 sessions were presented by partners, exhibitors and organizers, with around 200 high-level speakers flying from all over the world to discuss about farming in tropical areas, animals disease prevention, performance increase in pigs and poultry whilst reducing medication, shrimp farming technology, and to talk about inspirational best practices, innovative technology for risk control and stress reduction, but also market trends, regional policies, as well as technical and commercial topics. All program details can be found in the VIV Asia 2019 Show review that will be published on www.viv.net and www.vivasia.nl by mid-April.

Educational and informative sessions were successfully attended by a total of 5,396 visits over the 3 days at the second floor at BITEC. On the first day of the show a 3.5 hours conference organized by the Swine Raisers Association of Thailand, received the biggest audience of all programs with 333 delegates taking part in the “ASF: The disruption of ASEAN pig industry” session. The recent developments of the African Swine Fever, with a dangerous outbreak spreading from China to Vietnam right before the show dates, had the Thai government campaigning for farmers not to attend the show as a measure of containing the outbreak and protecting the swine sector in ASEAN. Certainly this had an influence on show numbers. On the other hand the show represents a great opportunity for industry operators to build the knowledge on how to better manage these diseases, and thus the impact on the overall exhibition attendance was limited considering the relatively small drop in visits.

The second best attended session was “AMR: from science to policy” presented by the Federation of Asian Veterinary Associations, FAVA, with 231 attendees.

The “China connects” seminar, jointly organized by VIV Qingdao and VIV worldwide, held on the first day, which served as the networking platform to deepen the cooperation between China animal husbandry & food industry and global industries, welcomed a total of 162 delegates.

Finally, the Food Engineering related conferences held on the second and third day of the show, namely the “MEAT 360° trend & innovation”, “Asian Food & Tech Trends “, and “Food Engineering Conference”, received a total of 319 visits. With a strong line-up of 100 companies in hall 98 featuring some of the global players in the primary and further processing of protein-based food, the newly branded Food Engineering section officially took off at VIV Asia 2019 and is bound to become a more and more important pillar within the VIV portfolio.

Food Engineering, including processing and handling, represented 10.5 % of VIV Asia 2019 total show space, with an outstanding 93% increase compared to the previous edition. Walking the show ground from hall 98 to 106, from Food Engineering to the Feed-related halls, the exhibition space showcased 24.5% of farm production, 6% of breeding and hatching companies, 6% crop-tech & feed-tech solutions, 37% feed ingredients and additives, 14% of animal health enterprises, and 2% media and consultancy companies.

Quality show. VIV Asia 2019 was not only a busy show, but also a quality event. 573 Industry leaders visited the exhibition, and most of them for more than 1 day. The VIV Industry leaders program brings the top of the industry to the VIV events making sure that the key players are not only invited to the exclusive networking sessions, but are also supported by the show organizers in finding the right suppliers and representatives within the rich show offer.

Several organized delegations, with the support of expert industry partners from China, Cambodia, Iran, the Philippines, South Korea, Nepal, and other countries, had the chance to visit the show and to join tailor-made activities including guided tours at the show ground and special session selections.

A show made with and for the industry. VIV Asia certainly owes its success to the proactive and innovative industry that works hard to improve itself and promotes excellence within the value chain throughout the years. As a way to acknowledge the importance of showing continuous dedication and passion for the industry’s developments and the VIV events, VIV worldwide together with Positive Action Publications once again hosted the Asian Personality Awards, during the opening ceremony of the show. The 5 personalities acknowledged this year were: Rafael Monleon formerly of MSD and now Aviagen, Noplit Sermsaksasitorn, Axel Arras from FPT, Alain Recroix, and Prof. Thaweesak Songserm.

Thinking ahead: at VIV Asia the launch of a new show for Asia

VIV Asia was also the occasion to officially launch a new VIV trade show and forum focusing on feed, pharmaceutics and genetics in the animal protein production. VIV health & nutrition Asia 2020 is the new niche-event by VIV worldwide. Entirely dedicated to innovations in nutrition, pharmaceutics and high-tech animal health solutions, this new show and forum concept is different from any Feed-to-Food VIV event, and will be held in the same location of VIV Asia, at BITEC, on the even years. 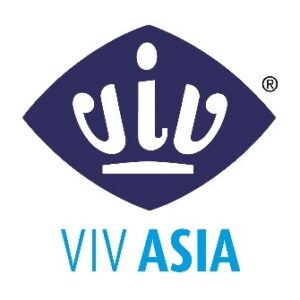