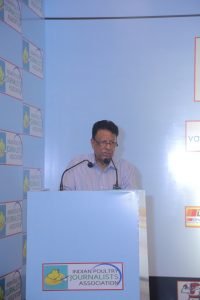 Members of the Indian Poultry Journalists’ Association greeted all delegates. Registration for the technical seminar began at 10.30 a.m. In his welcome address, Mr. B. S. Rana, president of IPJA, highlighted facts and numbers concerning the poultry sector as well as the challenge encountered by poultry farmers due to rising Soya and Maize prices. He underlined the significance of coordinating efforts to overcome the recent crisis that has confronted the poultry business on numerous fronts, ranging from feed to cage prohibition.

In his welcoming address, he also mentioned IPJA’s work in training farmers through technical seminars held around the nation. He also thanked the sponsors for their assistance and urged more businesses to come forward and help the IPJA in its altruistic efforts to benefit the poultry farming community.

He informed the audience that the next seminar would take place in AJMER on August 20th, followed by Raipur on October 8th.

Mr. B. S. Rana further stated that after a two-year hiatus owing to COVID-19, the IPJA Global Award will be held on November 24th at the Hotel Avasa in Hyderabad.

Following the felicitation, the first presentation was delivered by Mr. Vijay Sardana, who spoke about the difficulty faced by the poultry sector and advised that the audience work together to solve the problem. He stated that time is passing and that remaining isolated to tackle the situation is no longer an option. We will have to get down and discuss our destiny in this sector as a group.

He went on to say that we had passed up countless possibilities that could have changed our fortunes, such as export potential available as a result of the Ukraine war. He stated that we still have the option of shifting our thinking from merely being producers to marketing specialists or becoming passive bystanders while our businesses are taken over by international marketing corporations. 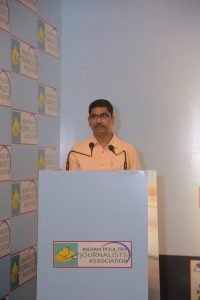 Dr. Ganesh Darban talked next about emerging and re-emerging illnesses and their control. He informed the audience that the poultry business has suffered greatly as a result of various existing illnesses and new developing diseases, and that they must be addressed on multiple fronts. He stated that while biosecurity is vital for disease prevention on the farm, once infections have arrived, they must be efficiently dealt with through adequate medicine and immunisation. According to him, timely immunisation might protect chicken farms from disease outbreaks. Dr. Ganesh Darban also discussed his firm, VAKSINDO, and its several successful portfolios available on the market, as well as VAKSINDO’s objectives and commitment to the agricultural community. 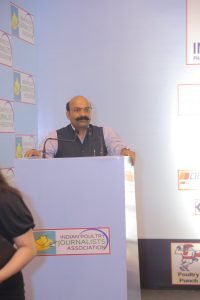 Dr. Devendra Hooda gave the following lecture on Managing Respiratory Complexes in Tropical Environment Conditions Using Available Tools. He advised the audience that understanding the bird and its behaviour is vital before attempting to administer medicine to birds. The audience was ecstatic to hear so much about the poultry birds, particularly their respiratory capabilities.

Dr. Devender Hooda was followed by Dr. Dinesh Singh, from Aviagen India, who provided sponsor presentations. His technical talk was titled “Ectoparasite of Poultry,” and he described the losses that poultry farmers face across the country as a result of these little organisms. These parasites, which carry a variety of deadly diseases, must be removed as soon as possible.

Mr. Shirish Dhopeshwar was the next speaker, and he lectured on ‘Profitable Waste Management.’ He stated that it is necessary to make sure that disposable chicken waste is handled appropriately and rationally in order to safeguard the environment. He stated that scientifically disposing of various types of chicken waste can contribute in the conversion of poultry waste into riches. He described the various machinery available at Dhopeshwar Engineering Works to turn poultry waste into riches. Mr. Dhopeshwar also represented Poultry India as IPEMA-Secretary, informing the audience about the highly anticipated event Poultry India 2022.

Following lunch, Dr. Sulav from Provet Pharma introduces the audience to the company’s activities and mission. He also described Mr. Muthu Selvan, the founder of Provet Pharma, for the Indian poultry and aqua industries, as well as how their efficient team is gathering information from the ground level about feed consumption and regulations, which can be critical for future predictions of the Indian poultry market. 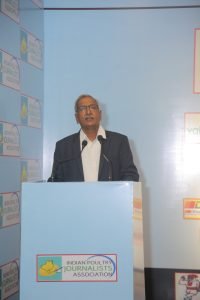 Mr. P Chakradhar Rao, an expert in the manufacture of drinking nipples and other equipment in Hyderabad, gave the following presentation on Water Management in Poultry. He began by advising the audience that it is critical to offer clean drinking water to poultry fowl. Clean water can protect birds from a variety of ailments. He also stated that it is critical to offer the proper amount of water to poultry birds because water consumption can significantly alter the digestive system of birds. He also discussed the chakra group of companies and their presence in India and around the world.

Varsha Group Bangalore gave the following sponsor presentation, which described their operations in India. Varsha Group has expanded rapidly under the leadership of Mr. Nanjaya, the Founder. Dr. B Nandeepa General Manager – Technical of Varsha Group also discussed the CSR operations, which include a multi-specialty hospital in Bangalore for the indigent.

P.F.I President Ricky Thaper, Mr. Gurdeep Singh, and Mr. Ranpal Dhanda also addressed the audience and briefed them about the work done by the Poultry Federation of India in the poultry business through frequent coordination with policymakers in Delhi.

This technical seminar’s event partners were INTERFACE Pharmaceuticals and POULTRY INDIA, while the gold sponsors were Vaksindo, Provet, and Aviagen, and the sponsors were Chakra Group, Dhopeshwar Engineering Works, Varsha Group, NOREL, ABTL, and VH Group, who were given mementos and flower buckeye. All of the speakers received mementos and floral buckeyes.

The IPJA also recognised the Poultry Federation of India, All India Poultry Breeders Association, and Indian Poultry Equipment Manufacturers Association for their excellent contributions to the growth of the Indian poultry sector. Mr. Baljinder Singh Aghi, of the Aghi Group and an IPJA member, was also honoured on this occasion.

Mr. B. S. Rana, President of IPJA, discussed the challenge faced by the poultry business and the advantage of IPJA technical seminars with the senior reporter of Karnal Breaking News. Mr. M. K. Vyas, secretary of the IPJA, reiterated the need for the establishment of a Poultry Development Board in order to improve coordination between industry and policymakers. He also thanked the administration for approving 5 LMT of soya. Mr. Shashank Purohit, Joint Secretary-IPJA, emphasised the necessity of balancing demand and supply in various sections of the country to stabilise egg and chicken prices. He also stated that in order to deal with the unpredictable weather and the time constraints of turning open houses into EC dwellings.