Microbiological integrity of eggs is an important issue, while bacterial pathogens in feed and environment of layer units can have serious consequences for bird health and productivity. Salmonella is the most widely understood bacterial pathogen in egg production, which, according to Farooq (2001) is among the bacterial species influencing higher losses in chicken and was abundantly found in bedding material of chicken (42%), drinkers (36%), feed (28%) and water tanks (17%) of poultry farms. However, opportunistic Gram-negative pathogens such as E. coli and Campylobacter can just as easily take hold. Colibacillosis, a syndrome caused by E. coli, is one of the most common infectious bacterial diseases of the layer industry. Colibacillosis causes elevated morbidity and mortality leading to economic losses on farm especially around the peak of egg production and throughout the late lay period (Linden, 2015). E. coli infections rank among the top two health concerns for both cage-housed and cage-free layers, according to a survey conducted by the Association of Veterinarians in Egg Production in the US (O’Keefe, 2013). The microbiological safety of table eggs remains therefore the overriding concern of consumers. Jones (2011) has suggested the use of chemical additives to control bacterial pathogens in feed – this may primarily involve the use of organic acids.

Organic acids have long been used in animal nutrition to stabilize feed and enhance animal performance. Early studies on these additives were carried out in pig production (Cole et al., 1968); however, they have been increasingly adopted in the layer industry since the early 1990’s.

Kirchgessner et al. (1992), was among the first to report the effects of organic acids (in this case fumaric acid) on productive parameters in layer units. Since that time, this knowledge gradually spread through the industry and the use of these valuable additives has also been adopted in the layer industry.

Improving hygienic conditions and poultry performance with the aid of organic acids has been reported by many sources (Desai et al., 2007). An important limitation, however, is that organic acids are rapidly metabolised in the fore-gut (crop to gizzard) of birds, which will reduce their impact on growth performance. More recently, sodium diformate (traded as Acidomix DF+, Venkys, hereafter abbreviated as DF+), has been proven to be effective against pathogenic bacteria along the whole gastro-intestinal tract in the case of Salmonella and Campylobacter, as reported by Lückstädt and Theobald (2009). Under commercial conditions, a large-scale feeding trial in Spain found a 99% reduction in intestinal E. coli contamination in birds fed 0.3% DF+ in the feed between 47 and 50 weeks of age. Furthermore, a later study by Kühlmann et al. (2012) found similar E. coli reduction rates, but also that beneficial bacteria in the gut were unaffected.

Pathogenic load in eggs is not the only concern to the layer industry. Poor eggshell quality is a huge hidden cost to the egg producer. It is estimated that more than 10% of eggs produced in the hen house are uncollectible or break before intended use, partly consisting of shell less, cracked or broken eggs, to the extent that they are not suitable for collection. Gupta (2008) stated that ‘every effort must be directed towards improving shell quality and reducing egg breakage’.

A commercial study in the Philippines found that feeding 0.2% DF+ between 65 to 69 weeks of age improved egg quality during this period (Table 1). Here, the improved eggshell quality was found to result from the addition of the acidifier to the diet, which increases the availability of the calcium to the bird, as reported by numerous other sources. As a result, the incidence of cracked eggs was reduced by 19% in the diet containing DF+.

These findings were further validated by Kühlmann et al. (2012), who found similar effects on eggshell quality parameters, in this case significantly improved eggshell thickness (0.32 mm and 0.34 mm for control and NDF-fed layers respectively).

Not only is the use of acidifiers in the feed a successful strategy to reduce pathogen load and improve egg quality in layer units, it also has potential benefits in increasing productivity.

This was proven in several studies, carried out under a wide range of climate zones – reaching form dry-hot – as found in India, via hot and humid (Nigeria) to the temperate climate in Europe.

In a 12‑week study at the Veterinary College and Research Institute in Namakkal, Tamil Nadu, India, the inclusion of 5 different levels of DF+ (0.05, 0.10, 0.15, 0.20 and 0.25% DF+) was tested against a negative control diet, using 270 commercial White Leghorn layers of 50 weeks of age. At the commercially relevant doses of 0.1% and 0.2% DF+, hen-day egg production was significantly increased, compared to the control diet. This would translate into an increase of 7 or 13 eggs per year and hen, respectively (Table 2). The feed efficiency in this trial was also improved significantly at these doses (Mani et al., 2014, data not shown).

*Means within a row with no common superscripts differ significantly (P<0.05)

A further trial under much more humid conditions was carried out in Nigeria to validate the aforementioned results. Here, the impact of 0.3% dietary sodium diformate on performance and health in laying hens from 55 weeks of age was studied over a period of eight weeks. The treatment and control groups (1050 birds per group) each received a commercial layer diet throughout the trial (Table 3). Feed intake over the trial period was lower in the birds that received the DF+ diet (119 vs. 122 g/bird/day; P<0.001), while hen-day egg production improved over the same period highly significantly (85.9 vs. 77.7 % in DF+ and control groups, respectively; P<0.001).

*Means within a row with a different capital superscript differ highly significantly (P<0.001)

The average number of eggs laid over the experimental period was 57,518 in the group given the DF+ diet, compared to only 51,047 in the control group (P<0.001). At the end of the trial, total egg weight was 3510 kg in the DF+ group, compared to 2910 kg in the controls, although due to the collection method, no statistical comparison was possible. Finally, the use of the additive led to a highly significantly reduced mortality (0.67 v. 3.81 % in the DF+ and control groups, respectively; P<0.001).

A Colombian trial under rather subtropical conditions was carried out with Babcock Brown hens. The birds were aged 44 weeks and the trial lasted for 10 weeks. The first 5 weeks without the additive, while from week 49 onwards 0.25% DF+ was added to the diet (Table 4). The daily feed intake was set to 115 g/d.

Table 4: Effect of 0.25% DF+ on the performance of Babcock brown hens*

*Means within a row with no common superscripts differ significantly (P<0.05)

Layers fed with 0.25% DF+ have a significantly (P=0.015) increased hen-day egg production by 1.1%. At the same time, the egg weight increased highly significantly (P<0.001) by more than 2% – and the percentage of AA-eggs and AAA-eggs of the overall number of eggs (data not shown) was also significantly improved. Finally, the increased production was achieved with an improved feed efficiency by almost 3%, which meant that 1 kg egg weight was produced with 60 g less feed, compared to the control. And all the improved performance parameter were achieved despite the older age of the hens.

A similar impact on the egg weight was noticed at a commercial layer farm in Spain. There, almost 31,000 layers aged 48 weeks had been fed with 0.3% sodium diformate (daily feed intake at 105 g) for 3 weeks only. Within that rather short time, the egg weight increased notably by around 0.5% – and dropped by the same level when the acidifier usage stopped, clearly demonstrating the impact of dietary DF+.

An additional trial on short-term usage in layers was performed in Russia (Table 5). Over a period of only 18 days, the impact of 0.1% DF+ on layer performance under commercial conditions was tested. Hens were aged 50 weeks and almost 119,000 birds were used in the trial.

Table 5: Effect of 0.1% DF+ on the performance of hens aged 50 weeks under large scale commercial conditions

Layers fed with the acidifier had a considerably increased performance (29% lower number of broken eggs and 21% less mortality), while achieving at the same time a greatly improved feed efficiency, which is reflected in the lower feed costs per 100 eggs by more than 5%, thus saving scarce feed resources. 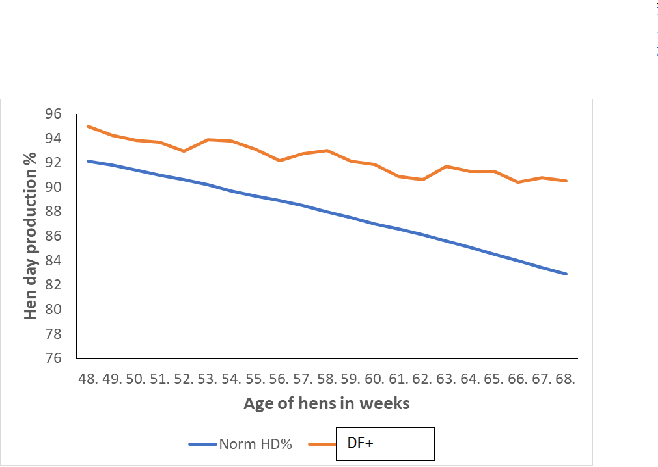 A recent trial in Europe (Slovakia) proved once more, that the concept of using sodium diformate in layers helps in increasing productivity, especially in aging birds. Figure 1 shows commercial data of Lohmann Brown hens which were fed between week 48 and 68 during a long-term trial with 0.15% DF+. Data clearly show that the hen-day egg production of the NDF-fed birds is significantly above the norm given for this breed. After 10 weeks of using, productivity was 5.7% above norm, while at the termination of the trial, the DF+ hens had a HD% of 9.2% above the norm for the hens at that age.

The use of organic acid salts in the diet clearly has a range of beneficial effects in layer production. Firstly, their application in biosecurity management through the feed assists the bird to combat bacterial pathogens. Their conferred improvements in nutrient digestibility, especially that of minerals like calcium leads to better egg quality. Improving nutrient availability by including dietary organic acids in the diet, also plays a role in the number of eggs produced, as healthy, well-conditioned birds are more productive.

This concept has been proven the world over and the use of organic acids, their salts – and especially dietary sodium diformate (Acidomix DF+) is irrefutably an effective and sustainable tool to enhance layer performance under all production conditions, in terms of egg quality, safety as well as productivity.