Introduction: Poultry sector is one of the most quickly growing industries both in developed and developing nations. To sustain poultry production at the peak, feed is needed for gaining high-quality products because this feedstock enhances the growth rate of birds and lower their mortality rate due to malnutrition. Various factors deteriorate poultry feedstock and lastly your bird’s health. One of these deteriorating factors is mycotoxins produced when toxin producing fungi grow in feed and grains. And disease caused by mycotoxins is known as mycotoxicosis. These mycotoxins have become a constant threat to the poultry business globally. Several feed ingredients used up in poultry rations can be contaminated by these dangerous mycotoxins that are consumed by birds and can end to many serious consequences. Hence, these mycotoxins are not only affecting bird’s health but poultry business also.

What are mycotoxins:- A mycotoxin is a toxic compound which is a secondary metabolite of fungi. Mycotoxins have additive or synergistic actions with other natural toxins, infectious agents and nutritional deficiencies.

Several types of fungi produce different types of mycotoxins such as –

Poultry farm has different species of birds. Each species has different sensitivity for mycotoxins. Ducks, geese, and turkeys appeared to be more prone to mycotoxicosis than chickens and quails.

The very important point is that young chickens are more sensitive than older ones. 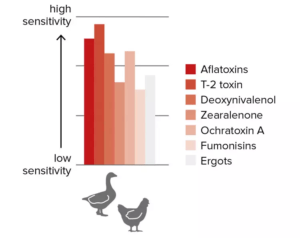 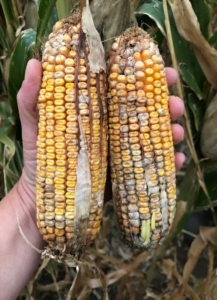 Among all, aflatoxin considered to be the most dangerous to poultry.

* Avian species, breed, and strain.
* Mycotoxin concentration in the feed.
* Duration of exposure to the bird consuming the feed contaminated with a mycotoxin.
* Health and nutritional status of the bird.
* Age of the bird.
* Presence of more than one mycotoxin in the feed.
* Poultry being kept in adverse climate, e.g. high humidity and temperatures.
* High density
* Poor ventilation
* Threats due to various poultry diseases e.g. coccidiosis, fowl pox, etc.

Effects of mycotoxins in poultry: –

These mycotoxins majorly affect the gastrointestinal tract of poultry by causing injury to the mucosa, have oral lesions, damage in tips of villi of the intestine. Like T-2 toxin mainly cause haemorrhage, necrosis, and inflammation of the intestinal epithelium, proventriculus and gizzard.

It also has haemopoietic effect and may lead to anaemia and haemorrhages.

One-week old chick is very susceptible to mycotoxins even at a low level. As it is a crucial stage of a chick’s development. Hence, this must be taken care of. 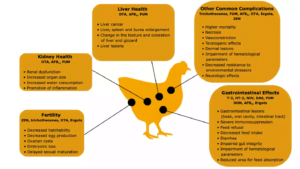 Diagnosis of mycotoxicoses in poultry:- Presumptive diagnosis can be done by seeing various clinical signs and pathological lesions on primary target organs and can be used as a sign for mycotoxin contamination in feed. Sometimes, mycotoxin- induced illness might be difficult to observe.

● It can be suspected by history, clinical signs, and presence of mouldy feed.
● Confirmation demands isolation, identification, and quantification of a specific toxin in feed ingredients.
● Suspected feedstuffs to be examined to uncover the signs of fungal contamination.
● Feed and ingredient sample should be properly collected and promptly submitted for analysis.

Removal of toxic feed and it should be replaced with unadulterated feed.

Apply HACCP approach at various critical points such as transportation, storage and processing.

At last, decontamination strategies can be applied to deactivate mycotoxins in feed without affecting quality of feed. These are chemical, biological and physical approaches.

Treatment: – Several measures are to be done:

● Treat concurrent disease to decrease disease interactions.
● Provide your bird supportive care with various vitamins, trace minerals, and increased dietary protein.
● Liver supportive therapy should be given.
● The use of non-specific toxicological therapies such as activated charcoal in the feed has a mycotoxin sparing effect in the gut.
● The application of a combination of different strategies can also be useful in multi- mycotoxin infection.

Mycotoxins are the secondary metabolite of fungi. At aerobic conditions, fungal growth in feed is inevitable. The effects of mycotoxins in poultry are very complex and vary greatly according to their presence, interaction, and their mechanism of toxicity affecting several organs and in case of high levels, may even lead to the death of animals. It can result in various pathogenic conditions depending upon type of mycotoxin such neurotoxicity, hepatotoxicity, nephrotoxicity, diarrhoea and hatching defects. Mycotoxicosis should be suspected when sign and lesions suggest feed intoxication and post-mortem examination should accompany feed analysis. Then, toxic feed should be replaced with suitable treatment protocol and supportive care. Prevention includes management practices that avoid mould growth during feed preparation, transport and storage.

Suresh Chitturi, the IEC Chairman, creates a milestone with great initiatives during the World Egg Day - Month Celebrations for the year 2020