From January 1st, 2006 onwards in the European Union (EU) antibiotics were banned as growth promoting feed additives. As the first and currently single Asian country the Republic of South Korea followed the EU example in 2011. It can be expected that numerous further big countries in the world will also remove feed antibiotics within the next few years.

The protection of consumers health is the main reason for these decisions. However, the removal of antibiotics at the same time means a big challenge, since alternative substances should be comparably effective with regard to their impact on the productivity of farm animals and with regard to the preservation of animal health.

Within the alternatives to antibiotics, phytogenic substances represent the most promising class of feed additives. This opinion is based on the availability of an infinite number of available plants with highly active ingredients. The spectrum of effects mediated by plant derived compounds includes the disturbance of microbial communication, antioxidant properties, and anti-inflammatory effects.

In this article, two aspects of selected phytogenic compounds are looked at in more detail:

With regard to the efficiency to protect farm animals against disorders caused by pathogenic microorganisms, it has been frequently postulated, that phytogenic substances (in particular essential oils and their compounds) exert bactericidal effects. By definition, the term ‘minimum inhibitory concentration’ (MIC) towards a micro-organism (MO) means a reduction of MO viability by more than 90%.

The minimum bactericidal concentration (MBC) means a reduction of viability by more than 99%.

Tables 1 and 2 give an overview of the MIC concentrations of selected essential oils and essential oil compounds against several micro-organisms.

Neglecting an additional dilution effect of the feed in the intestine, the MIC concentrations give evidence that genuine bactericidal effects of phytogenic compounds in the animal cannot be obtained with phytogenic additives.

Essential oil concentrations in the feed, unrolling bactericidal effects, would:

• Result in a reduced feed intake and performance due to the strong taste of the oils.

Quorum sensing (QS), or bacterial cell-to-cell communication, is a mechanism of gene regulation in which bacteria coordinate the expression of certain genes in response to the presence of small signaling molecules (inducers).

This regulatory mechanism has been shown to control virulence gene expression in many different pathogens. Virulence factors include gene products involved in motility, adhesion to the host’s intestinal epithelium, host tissue degradation, iron acquisition, and toxin production. The abundance of the signaling molecules in the environment thereby directly reflects the bacterial population density. If a certain threshold of inducer concentration is reached, the bacteria start to produce virulence factors, leading to the outbreak of the disease in the host.

Some bacterial strains use further sensing molecules, like catecholamines, in addition to NAHL sensing. Selected phytogenic substances interfere with QS of bacteria and therefore possess the ability to suppress the virulence of bacteria. This, so called quorum sensing inhibition (QSI), can be studied very well in the model organism Chromobacterium violaceum, which produces the fluorescent purple dye violacein due to achievement of the threshold population density.

Thus, Chromobacterium violaceum can be used as a screening tool to test the QSI potential of selected substances. However, to assay the impact of QSI towards pathogenic micro-organisms, other readout parameters are needed. In the context of QSI by phytogenic substances it could be shown that clove oil strongly inhibited violacein fluorescence in Chromobacterium violaceum at already subinhibitory concentrations (Table 3). Promising results for QSI by essential oils were also reported for Campylobacter jejuni and the enterohaemorrhagic E. coli strain 0157:H7.

In the first mentioned study, already 0.10mmol/L carvacrol, corresponding to 15mg carvacrol/L, significantly inhibited the motility of Campylobacter jejuni. In the latter study, 1 mmol/L carvacrol (150mg/L) induced a strong heatshock response in E. coli and inhibited flagellin synthesis, essential for the motility of the pathogen. These results impressively show that phytogenic substances have the potential to disturb pathogenic micro-organisms very well.

In the future it is therefore of significant interest to force research into studying the efficiency of phytogenic substances on QSI of pathogenic bacteria.

In the post-antibiotic-era’ the disruption of QS of pathogenic bacteria by phytogenic substances represents one core strategy to preserve farm animals from infectious diseases of the intestine.

Due to the ban of growth promoting antibiotics, the infection of farm animals with species specific pathogenic micro-organisms represents an issue of growing importance. In numerous cases, the infection with pathogens, does not result in the full-blown clinical picture, but leads to a severe reduction of performance and causes economic damage. This aspect is well known with regard to the infection of chickens with Eimeria tenella.

Irrespective of its degree, an infection with intestinal pathogens induces an inflammatory response in the hosts. During an infection with pathogenic micro-organisms, intestinal cells secrete a variety of cytokines in order to attract cells of the immune system. In the early stages of immune response,macrophages, entering the affected tissues, produce a strong inflammatory reaction. In later stages T cells are also involved in the promotion of inflammation.

The most important intra cellular transcription factor, triggering inflammation in a cell is the Nuclear factor ‘kappa-light-chain enhancer’ of activated B-cells’ (NFkB). NFkB on the one hand induces the synthesis of cytokines, responsible for the further recruitment and attachment of immune cells (for example. IL6, VCAM, ICAM) and of Cyclooxygenase 2 (COX2), producing pro-inflammatory prostaglandins. On the other hand, NFkB action is needed to produce anti-inflammatory cytokines, responsible for the termination of an inflammation (for example IL- 10), and of antioxidant enzymes, which enable cell survival and help to terminate an inflammation.

The endogenous antioxidant enzymes, which are of particular interest for the termination of an inflammation are NAD(P)H Quinone-Oxidoreductase I (NQO I), Heme oxygenase I (HO I) and glutathione peroxidase 2 (GPx2).

A common feature of these mentioned antioxidant enzymes consists in their specific synthesis mechanism. Their transcription and synthesis take place, due to the release of the transcription factor ‘Nuclear fac tor (erythroid-derived 2)-like 2’ (Nrf2). In this context it must be mentioned that besides NFkB and oxidative stress, numerous phytogenic substances act as very strong Nrf2-releasing agents.

Curcumin from curcuma longa and the brassicaceae isothiocyante sulphoraphane are the best characterized inducers of endogenous antioxidant enzymes by triggering Nrf2-release. The induction of endogenous antioxidant enzymes concomitantly can reduce the severity of inflammation. In this context it could be shown that the induction of GPx2 reduces COX2-dependent prostaglandin E2 synthesis.

The results of our own investigations with growing broilers revealed a considerable induction of a broad panel of Nrf2-dependent antioxidant enzymes and of phase II enzymes in the jejunum, by supplementing the diets with 150g/t turmeric oil or with sulphoraphane-containing broccoli extract. In an own rat study, it could be demonstrated that sulphorphane feeding significantly induced intestinal antioxidant enzymes, while reducing the expression of COXI, COX2, VCAM, and Monocyte Chemoattractant Protein I (MCPI).In a recent study with Eimeria tenella infected broilers, the addition of capsicum and turmeric oleoresins to the diets strongly reduced intestinal lesion score and the expression levels of main pro-inflammatory cytokines.

The results of these and numerous further trials indicate that various phytogenic substances have promising effects with regard to the reduction of pathogen-induced intestinal inflammations in farm animals. In the future, research into the screening of anti-inflammatory phytogenic substances should be focused in order to develop phytogenic products with customized effects against species specific intestinal diseases. Moreover, there is a need to develop products with an increased content of active substances for the treatment of acute intestinal inflammation. 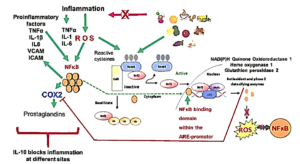 • Due to their content of an infinite variety of active ingredients, phytogenic substances represent one of the most interesting and important classes of current and future feed additives.

• Phytogenic substances beat the potential to effectively repress the pathogenicity of intestinal microorganisms and to prevent and treat infectious diseases of farm animals.

• In the future a broad-based research is needed to make the full potential of phytogenic substances usable in order to preserve the health of farm animals and consumers.

References are available from the author on request

This article was published in International Poultry Production in 2014 (Vol. 22, No. 6)