INTRODUCTION
Practical methods to detoxify mycotoxins contaminated grain or feed on a large scale and in a cost-effective manner are not currently available. At present, one of the most practical approaches consists of using adsorbent materials in animal diets to reduce the absorption of mycotoxins from the gastrointestinal tract. Clays are an important group of products that have been used successfully worldwide to reduce mycotoxicosis; and all commercial anti-mycotoxin additives or mycotoxin inactivators available in the market are clay based products.

Clays are complex and widely diverse aluminosilicates with a variety of functional properties, but they are often grouped into a single category. This is very misleading since there are many types of clays, which are completely different from one another.

Many types of clays do not capture mycotoxins; some can absorb water, others can absorb ammonia, and only certain clays can adsorb mycotoxins. The first effective mineral adsorbent was described as hydrated sodium calcium aluminum silicate (HSCAS), and others have subsequently used this nomenclature. Because HSCAS is a generic description, it does not specifically define the material of use. The majority of mycotoxin binding products are classified as montmorillonite, belonging to the phylosilicate group, which is composed of layers of aluminum and silicon connected in a 1:1 or 2:1 arrangement.

Not all clays that adsorb mycotoxins are equally effective in protecting animals against the toxic effects of mycotoxins. Even some montmorillonite adsorbents are not always the best binders. Furthermore, the adsorption ability of similar clays may vary from one geological deposit to another.

Besides their origin, formation and structure, clays can vary in chemical composition, surface acidity (pH), electrical charges (polarity), distribution of exchangeable cations, and porosity and expansibility characteristics. Despite all these differences, there is no significant correlation between any single physical or chemical property and the mycotoxin binding capacity of clays.

Therefore, the effectiveness of a mycotoxin adsorbent is tested by conducting evaluations in vitro and in vivo to demonstrate a statistical significant response in preventing mycotoxicosis. The dosage of the adsorbent and the level of the mycotoxin used in these tests must always be reported. Also, it is important to demonstrate the innocuity of the product when it is evaluated without the presence of mycotoxins.

The in vitro test must be conducted with high performance liquid chromatography (HPLC) using a methodology using two types of solutions: one of pH 3 and another of pH 6, mimicking the gastric and the intestinal juices. For the in vivo test there is a standard experimental protocol consisting of four treatments: a control without mycotoxins; a control with adsorbent; a control with mycotoxin; and one with mycotoxin plus adsorbent. Additional treatments can be added to this experimental design, such as different testing levels of the adsorbent.

The amount of an adsorbed mycotoxin is difficult to calculate; therefore in the in vivo trial, the efficacy of adsorption has to be determined by the animal performance (body weight gain, feed consumption and feed efficiency) and the target organ protection.

It is important to evaluate the target organ(s) since they reflect the specific damage of the mycotoxin. It is also necessary because some adsorbents base their effectiveness on a positive effect on performance, which is a result of the presence of enzymes, beneficial bacteria, yeast and /or immuno-stimulant in the composition of those products, and not mycotoxin adsorption.

The relation between in vitro evaluation and in vivo effectiveness cannot always be confirmed. In evaluations done by Dr Mallmann and collaborators in LAMIC on 58 AMA for different toxins and species, little more than 55% of AMA approved in vivo, had an adsorption greater or equal to 90% at pH 3 and 6. For AMA approved in vivo, more than 50% had an adsorption less than 70% at pH 3 and 6 (Figure 1). There was no significant correlation between in vitro and in vivo evaluations when the data of those 58 in vitro and in vivo evaluations were submitted to a linear regression analysis. The greatest correlation found was in broiler chickens, at pH 6 with fumonisins (P < 0.07 and R = -0.55), followed by correlation for swine at pH 6 with aflatoxins (P < 0.1 and R = 0.55). These analyses showed that some products that were not very effective in laboratory conditions can often function satisfactorily in the in vivo trials.

It is evident from this data that the results obtained from in vitro evaluations are not sufficient to prove the efficiency of an AMA. Therefore, statistical satisfactory results from the in vivo test are necessary to determine the efficacy of an AMA. 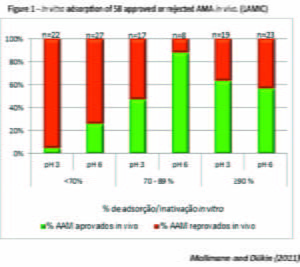 Figure 1 – In vitro adsorption of 58 approved or rejected AMA in vivo. (LAMIC)

During the last 20 years, various scientific studies have demonstrated that some aluminosilicates are very effective in preventing aflatoxicosis. In the program for approval of anti-mycotoxin additives, conducted by LAMIC in Brazil, 16 out of 32 products evaluated were proven to be efficacious against aflatoxin in broiler chickens and only 4 out of 12 in swine. All the effective products are or contain clays.

The majority of the clays that significantly ameliorate the toxic effects of aflatoxins have been reported to be effective at an inclusion rate of 5 or 10 kilos per metric ton of feed. Only a few, including Myco-Ad, significantly prevented aflatoxicosis at 2.5 kg/mt of feed. Recently, Myco-Ad has become the first and only product approved by LAMIC against aflatoxin in three different species: poultry, swine and cattle.

Very few products are effective against more than one type of mycotoxin; among these, Myco-Ad is exceptional because it has been scientifically proven that Myco-Ad ameliorates the deleterious effects of aflatoxin, in the three species mentioned above; and prevents the toxic effects of ochratoxin, T-2 toxin and fumonisin in broiler chickens.

In recent years, special proprietary processes have been developed for the production of purified and activated phylosilicates with the objective of producing adsorbents capable of binding fusariotoxins such as zearalenone (ZEA), deoxynivalenol (DON), fumonisins, and T-2 toxin, which are especially toxic for swine. After the process, these phylosilicates become very light, showing a much lower density and particle size than regular clays. Normally, these products have been effective when added to animal diets at a very low dosage (0.5 to 2.0 kg/mt).

One of the few purified phylosilicates is Myco-Ad A-Z which has been scientifically proven to be efficacious in preventing the toxic effects of T-2 toxin in broiler chickens, and fumonisin and zearalenone in pigs.

Recently, the efficacy of Myco-Ad A-Z in reducing the natural toxicity caused by ZEA + DON contaminated feed was evaluated in gilts. Results of this experiment indicated that the deleterious effects of ZEA+DON in prepubertal gilts were completely independent from each other. ZEA caused hyperestrogenism and DON resulted in poor performance with reduced liver size. The addition of 1 kg of Myco-Ad A-Z per metric ton of feed prevented both the toxic effects of DON and the estrogenic effects of ZEA in prepubertal gilts. (Table 1, Table 2, and Figure 2).

a, b Means within columns with no common letter differ significantly (P≤ 0.05)

* Waste of feed was noticeable in pigs from ZEA+DON treatment. Pigs from other two treatments (Control and ZEA+DON+MYCO-AD A-Z) imitated that behavior

Table 2.  Effects of Myco-Ad A-Z on the relative liver and internal reproductive system weight of 40 day-old gilts exposed to test diets for 21 days

a, b, c. Means within columns with no common letter differ significantly (P≤ 0.05) 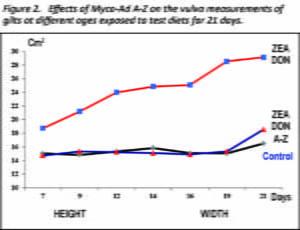 Clays based products are the most effective mycotoxin adsorbents. However they are diverse aluminosilicates with a variety of properties. Many types of clays do not capture mycotoxins; some can absorb water, others can absorb ammonia, and only certain clays can adsorb mycotoxins.

There is no significant correlation between any single physical or chemical property and the mycotoxin binding capacity of clays. Therefore, the effectiveness of a mycotoxin adsorbent has to be evaluated by conducting in vivo test using a scientific experimental design which measures the beneficial effects of the product on animal performance and on the target organ(s) affected by the mycotoxin being studied.

Scientific studies have demonstrated that some aluminosilicates are very effective in preventing aflatoxicosis at an inclusion rate of 5 or 10 kilos/mt of feed; and only few, can do it at 2.5 kg/mt. Very few products are effective against more than one type of mycotoxin. Recently, special purified phylosilicates have been developed, which are capable of binding fusariotoxins such as zearalenone, deoxynivalenol, fumonisins, and  T-2 toxin at very low inclusion rate (0.5 to 2.0 kg/mt).

A COMPLETE GUIDE FOR POULTRY INSURANCE IN INDIA