Broiler performance in the commercial poultry industry has shown staggering improvement over recent decades. This rate of improvement is still accelerating with an average weight gain of 40-50 g/year predicted for next 10 years (Chang, Broiler Breeder master class 2017). Nutrient needs including optimal amino acids of fast-growing broilers is well established, however the Creatine (Cr) need of modern broilers is not fully recognized. Meeting the Cr needs of current broiler strains can further improve the efficiency of utilization of nutrients at the cellular level which in turn can enhance growth performance.

1. Creatine is an integral component of energy metabolism

The role of Cr in cellular energy metabolism is well documented. Cr and its phosphorylated form, Phosphocreatine (PCr) play a dynamic role in cellular energy metabolism of animals. The Cr/PCr system functions as a backup to adenosine triphosphate (ATP) /adenosine di-phosphate (ADP) system in order to store and mobilize energy when required on a short notice, particularly in muscle cells (Michiels et al., 2012). Readily available PCr and ATP molecules improve the efficiency of various biological processes in cells that require energy in the form of ATP (Wallimann et al., 2007).

The metabolism of Cr involves a series of enzymatic reaction as illustrated in Figure 1. Cr is synthesized in liver from guanidino acetic acid (GAA) formed mainly in the kidney from glycine and arginine. GAA is transported via bloodstream to the liver, where most of GAA is methylated to Cr (Mousavi et al., 2013). Cr synthesized in liver is transported largely to muscles cells. Once Cr enters the muscle cell, it is phosphorylated to PCr by Creatine Kinase (CK) through a reversible metabolic pathway. Part of this Cr pool (1.6-1.8 % per day) is irreversibly lost and excreted as creatinine (Lemme et al., 2007). This rapid turnover of Cr indicates the need to steadily replenish Cr pool either by de-novo synthesis or by dietary intake especially in fast growing broilers. 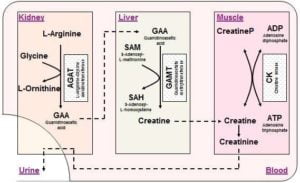 3. Fast growing broilers have a requirement for Creatine

It is estimated that about two third of daily Cr requirement would be met by de-novo synthesis while the other one third must be provided by exogenous supplementation (Lemme, et al., 2007). Cr is only present in feed ingredients of animal origin like fish meal (~1100 ± 800 mg/Kg), meat and bone meal and poultry by-product meal (~200 ± 107 mg/Kg) while plant-based ingredients are devoid of Cr (Krueger et al., 2008).
However, contribution from animal by-products to dietary Cr would be rather marginal explaining why there is a need for supplemental Cr in fast growing broilers. Inclusion level of 5% fishmeal in the diet would contribute <10 mg Cr/ day at 150 g daily feed intake (50 Kg fish meal per Mt*1.11 g Cr/Kg fishmeal*150 g feed intake). The daily Cr requirement of a 1 Kg and 2 Kg broiler is estimated to be 210 mg and 295 mg respectively, of which approximately 140 mg and 195 mg can be endogenously synthesized (66%). This creates a gap of 70 – 100 mg in daily Cr requirement for the birds weighing 1 and 2 Kg respectively.

4. Creatine is a nutrient

Based on the above arguments, Cr can be defined as a conditionally essential nutrient. In contrast to humans where Cr accretion happens over a long period of time, broiler feeding trials demonstrated that dietary supplementation of GAA reflected in a spike in the metabolic pool of Cr in muscle tissue within weeks (CCL Research Netherlands, 2007). Studies on digestibility and utilization of metabolic intermediates clearly provides evidence that the birds metabolism identifies supplemental sources of Cr like other nutrient sources with digestibility co-efficient of 99% and utilization efficiency of 76.2% (Tossenberger et al., 2016). GAA is the natural precursor of Cr. From an application perspective, it turned out that Cr monohydrate is not stable in feed processing while GAA has shown to be thermally stable (Baker, 2009). From an economic perspective, supplementation of Cr in the form of GAA is more cost efficient compared to Cr monohydrate. Accordingly, GAA has been officially registered as an animal feed additive by American, FDA Federal Register 81, 30 November 2016 and European, Eur-Lex L270/4, 5 October 2016 regulatory agencies (Khajali et al., 2020).

* as informed by customer

• For modern fast-growing broilers, there is supply-demand gap of Cr
• Inclusion of animal proteins in diets meets only marginal Cr requirement
• Cr can be classified as conditionally essential nutrient for broilers
• GAA, the precursor of Cr improves the efficiency of feed to meat conversion in broilers

NUTRITIONAL MANAGEMENT OF BROILERS IN SUMMER

RISE IN DEMAND FOR PROCESSED MEAT DUE TO PANDEMIC