Discovery of antibiotics is one of the greatest benefits to mankind. Millions of lives have been saved across the world ever since the use of antibiotics came into practice. Initially the use of antibiotics was restricted only to humans, until the practice of intensive farming came into existence in the 1950’S and their routine use in animals for prophylactic purposes began. In 1963, the emergence of the first resistant bacteria was described (Watanabe et al., 1963). In 1969 a committee of government experts in the UK concluded that the use of antibiotics in animals had contributed to antibiotic resistance in humans. In 1975, further UK research linked the prolonged use of antibiotics to shedding of Salmonella typhimurium and its development of resistance to: Virginiamycin, Bacitracin, Flavomycin, Nitrovin, Tylosin, Sulphaquinoxaline, Ampicillin, Chloramphenicol and many more antibiotics. These resistant bacteria proliferate in the animal and are transmitted to other animals. Transfer of the bacteria from animal to human is possible through many routes. Humans can also get infected by eating meat from animals with resistant bacteria. In 2015, antibiotic-resistant pathogens were estimated to cause over 50,000 deaths a year in Europe and the USA. The toll is projected to rise to 10 million deaths per year worldwide by 2050 (O’Neill et al., 2016). Sensing trouble, some countries have already imposed a ban on the use of prophylactic antibiotics in livestock feed and many more are in the process. However, without the use of antibiotics in animal farming, the productivity of the animal is compromised and hence there is an absolute necessity to look into suitable replacements. The following review deals with the use of effective replacements to antibiotics in the form of diformates – the double salts of formic acid; phytogenic compounds and their efficacy against bacterial pathogens. Available data show that these substitutes not only effectively control pathogenic bacteria but also improve productivity far more effectively than antibiotics.

Over use of antibiotics, the development of resistant bacteria and its ill effects on the human population eventually leading to the ban on prophylactic use of antibiotics in animal farming, is currently the hottest topic of discussion everywhere. The ban on prophylactic use of antibiotics in animal farming is well deserved, however, looking at the bacterial challenges in the animal farming, it is imperative to have some kind of a tool to control the bacterial infections and improve the performance of the farmed animal.  Organic acids are looked upon as the most promising alternative to the antibiotics (Papatsiros and Billinis, 2012), as in addition to its antimicrobial property, organic acids provide many extra benefits such as improving the intestinal health, optimising the intestinal pH and thereby improving the nutrient digestibility. Organic acid controls the development and growth of mold and bacteria by the virtue of its inherent antimicrobial property and are in use as a preservative in food industry since ages. Since half-a-century they also have been used in the animal industry, much of it to control the mold and bacteria in the feed, in order to improve the hygiene of the feed and thereby to improve the performance of the animal. The current article focuses more on to the role and advantages of organic acid in the control of pathogenic bacteria in the gastro-intestinal-tract (GIT) of chicken/swine.

Knowing that the pH in the GIT of the animal is different in different areas and that the pathogenic bacteria like E. coli and Salmonella spp. thrive and multiply in the lower GIT where the pH is favourable for their growth, the efficacy of the organic acids to control the bacteria depends on various factors such as the type and the form of organic acids used, the concentration and amount of acid reaching to the small intestine and the method of application. Though there are many organic acids available, each has a specific molecular structure and varied efficacy and a different MIC (Minimum Inhibitory Concentration) for different bacteria. Formic acid has the strongest antibacterial activity as compared to the other acids and has the lowest MIC compared to other acids (Table 1; Strauss and Hayler, 2001).

It has been seen that the liquid acids have very little or no role when the focus is the control of pathogenic bacteria in the lower gut, as more than 90-95% acid gets digested before reaching the small intestine. It has been seen in such a study, that only 5.5% of the formic acid reaches to the small intestine when used at a dosage of 0.5% liquid formic acid (85% active ingredient) in compound feed (Kirsch 2010).

Salts of organic acids, like calcium propionate, sodium formate or sodium benzoate generally referred to as single salts, as it has one molecule of mineral and one molecule of acid in its structure, seemed to be a good option to add active ingredients in a solid and non-corrosive form, it also helps in reducing the buffering capacity of the compound feed. Studies have shown that organic acid salts led to lower E. coli counts in the ileum and higher Lactobacillus counts in the colon of piglets (Bosi et al. 1999)

Although no much data is available on the amount of acid reaching to the small intestine when used in the form of single salts, quite encouraging data is available on the diformates- the double salt of formic acid (one molecule of mineral and two molecules of formic acid), which shows about 85% of the formic acid enters the small intestine when used in diformate form (Figure 1). 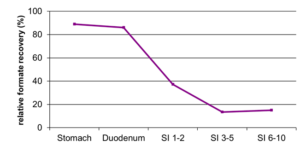 As the amount of formic acid reaching the small intestine (SI) is quite high, one can see well documented results with diformates at much lesser dosage as compared to the single salts.

Figure 2: Effect of sodium diformate (traded as Acidomix DF +) on gut microflora in poultry (after Lückstädt and Theobald, 2009)

The availability of higher amounts of active ingredients in the gut will have an influence on the overall gut microflora. Such a study showed (Figure 2) that the number of pathogenic bacteria has been lowered by about 99% whereas the number of beneficial bacteria is improved by one log (Lückstädt and Theobald, 2009).

Tests against intestinal pathogens, including Salmonella, have shown that diformates have significant antimicrobial activity in broiler chickens (Table 2). Keeping bacterial pathogens under control reduced the probability of causing a disease outbreak.

Table 2: Salmonella profile (in % positive) in naturally contaminated broiler in Spain fed with or without sodium diformate (NDF) – after Lückstädt and Theobald, 2009

In further studies with 0.3% of sodium diformate, carried out at a university in Taiwan, the positive effects on pH in the upper GIT and the improvement in digestibility of protein and fat were seen (Table 3).

Table 3: pH-values and digestibility coefficients in broiler fed with or without sodium diformate (NDF) till 35 days (after Lückstädt and Mellor, 2013)

A subsequent trial in the Ukraine, with the addition of 0.2% / 0.1% kg of sodium diformate showed an improvement of 6% in the average daily weight gain against a positive control consisting of an acid blend on carrier with the same dosages, while the FCR was improved by more than 5% (Table 4). Furthermore, this NDF-inclusion reduced the mortality by more than 21%. Finally, the productivity index (EBI) was increased by almost 13%, thus leading to a more cost-effective production.

Table 4: Sodium diformate vs. positive control in commercial broiler in the Ukraine (2013)

Though it has been well established that the diformates by the virtue of high formic acid content and with an ability to reach the small intestine in maximum concentration, exhibits excellent antibacterial and growth promoting results, the fact remains that the organic acids are more efficient in controlling the Gram-negative bacteria and show limited activity on the Gram-positive pathogenic bacteria.

In order to have a true antibiotic replacement agent, the combination of diformates with some other sustainable resources which show efficient antibacterial activity against Gram-positive bacteria would be of great advantage.

Work on such 3rd generation acidifier is currently carried out. The data available on the combination of diformates with the plant extracts (traded as Formi Alpha), containing different alkaloids (which show excellent activity against the Gram-positive pathogenic bacteria) are quite encouraging.

From a trial done in Germany in 2015 it was seen that the combination of diformates with the plant alkaloids can, next to the regular impact of diformates on performance and digestibility, considerably reduce Streptococci spp. incidences – and have therefore also a demonstratred impact against Gram-positive bacteria. Futhermore, data are available which show a positive impact on intestinal health, in such a form that the lesion score caused by Clostridia infection is significantly improved.

This and some more data that is available until now, assures that the antibiotics can be definitely replaced with safe and sustainable alternatives for prophylactic use. Such sustainable products will be helpful in improving the performance of the animals with no disadvantage to mankind and environment.

NOT ALL CHELATED MINERALS ARE SAME