• Poultry meat industry has been more dynamic than egg industry over these years.

• Consequent to faster growth rate, a part of the energy utilized in the past to maintain health and disease resistance is now diverted for higher growth & production, resulting in increased risk of negative immune response.

• Increased incidence of circulatory and musculoskeletal disorders is the major cause of mortality in the growing and liquidation age (Dr. K. Gibbs).

• Due to faster growth rate, physiological and immunological problems, birds have little time for gut maturation.

Gut is the largest immune organ of the body, containing around 70% of immune cells in the body. During incubation, the weight of embryonic small intestine increases faster than its body weight. The weight of small intestine is around 1% of the total embryonic weight till the 17th day of incubation, which increases to 3.5% at hatch. The intestine of newly hatched chick is immature and undergoes morphological, biochemical, enzymatic & absorptive changes during the first 14 days, but the first 24 hours are crucial for effective gut development. Access to feed and water during the first 6-10 hours post-hatch will help in the development of microvilli and has a significant impact on improving the absorptive capacity of intestine. Feed cost comprises of approximately 70% of the total cost of production and feed is the most important entity that can expose the birds to a wide variety of factors through gut.

Poultry GIT has a diverse community of bacteria, virus, fungi and protozoa, called as gut microbiota, the dominant community being bacteria. The mature gut hosts around 800 species of bacteria, whereas, a day old chick doesn’t hatch with the established microflora. Gut microbiota consumes around 20% dietary energy and
includes Lactobacillus, Clostridium, Bifidobacterium, Bacteroides, Enterococcus, Streptococcus, Firmicutes, Proteobacteria and others. Major harmful gut bacteria are Salmonella, Clostridium and E. coli. Bacterial densities in the ileum & cecum of the broiler chicks may be 108 & 1010 cells per gram of ingesta respectively at day 1 and reach up to 109 & 1011 cells within a week and remain stable till 30 days, unless disturbed by any anti-microbials / pathogens. 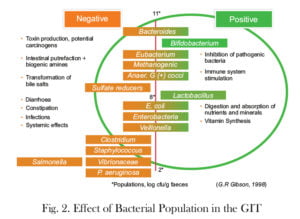 Fig. 2. Effect of Bacterial Population in the GIT

Dysbacteriosis is an imbalance in the gut microbiota as a consequence of an intestinal disruption. This results in poor nutrient absorption in the gut leading to wet litter, excessive ammonia production and subsequently poorer FCR and reduced body weight. It is generally characterized by thinning of the gut wall along with gassy and watery gut contents. Dysbacteriosis can result from environmental stress, poor ventilation, inferior brooding conditions, viral or bacterial challenges, coccidiosis, poor biosecurity or in response to feed change. 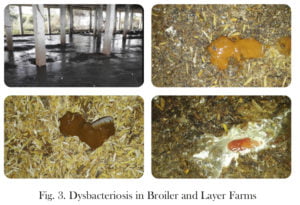 Probiotics and Prebiotics used in synergistic combination are termed Synbiotics.

Synbiotics improve the survival and implantation of live microbial dietary supplements in the GIT, either by stimulating growth or by metabolically activating the bene?cial bacteria.

Synbiotics have synergistic effects, because they:
• Promote growth of existing strains of bene?cial bacteria
• Improve survival, implantation and growth of newly added probiotic strains
• Increase persistence of probiotics in the GIT

Probiotics are defined as “live micro-organisms which when administered in adequate amounts confer a health bene?t on the host” (WHO, 2001). Commonly used probiotics are spore forming & non-spore forming bacteria and yeast. Among non- colonizing species, the most preferred one is Bacillus subtilis, as it has a tough, protective endospore, is a facultative anaerobe and is thermostable at pelleting temperatures. Species like Lactobacillus, Bifidobacterium, Enterococcus, Streptococcus, etc. are good colonizers in vegetative form and available with or without microencapsulation. Saccharomyces cereVisiae yeast is another commonly used probiotic. 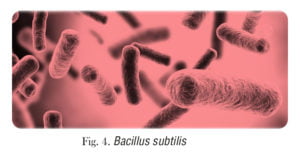 Mode of Action of Probiotics

The changes induced by probiotics in the intestinal epithelium are accentuated by the decrease in luminal pH, antimicrobial activity and secretion of antimicrobial peptides, inhibiting bacterial invasion and blocking the adhesion to epithelial cells. In this sense, they improve the intestinal barrier by maintaining tight junction proteins, elevating the production of cytokines (TNF-a, IFN-?, IL-10 and IL-12) (Arvola et al., 1999), which in turn, induce the secretion of IgA in the intestinal mucosa, causing the release of mucins (Gupta and Garg, 2009). 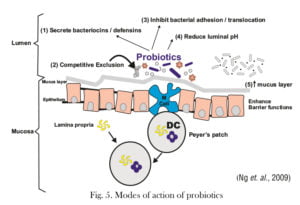 Fig.5. Modes of action of probiotics

Mucins, a layer of glycoproteins, forms a ?lm on contact with water, lubricates and protects the intestinal epithelium against pathogens by forming a physical barrier between the epithelium and the lumen contents (Oliveira-Sequeira et al., 2008), keeping the bene?cial bacteria in a safe place in the intestinal lumen (Mattar et al., 2002). In the intestine, probiotics interact with enterocytes, goblet cells and M cells from Peyer´s patches which results in an increase in IgM and IgA levels, contributing to the barrier against pathogenic micro-organisms (Szajewska et al., 2001). In addition, there is an antagonist effect through the secretion of substances that inhibit the growth and development of pathogenic bacteria such as bacteriocins, organic acids and hydrogen peroxide (Patterson and Burkholder, 2003; Oumer et al., 2001; Mazmanian et al., 2008). 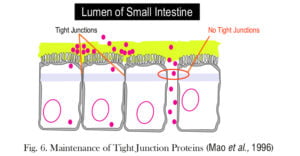 Prebiotics are non-digestible food ingredients, which bene?cially affect the host by selectively stimulating the growth and/or activity of one or limited number of bacteria in the digestive system and thus improve the host health (Gibson and Roberfroid, 1995). Mannan oligosaccharides (MOS), Fructo oligosaccharides (FOS) and Galacto oligosaccharides (GOS) are commonly used prebiotics in poultry (Ferreira et al., 2011).

MOS is an outer cell wall protein, also called functional carbohydrate derived from the cell wall of Saccharomyces cereVisiae yeast (Kaplan and Hutkins, 2000). Due to beta linkages, it can’t be digested by endogenous enzymatic secretions and the only way is microbial digestion. From a food safety perspective, prebiotics are considered preventive agents and can be broadly categorized as either agents who reduce or eliminate already colonized food borne pathogens or prevent colonization of incoming pathogens. The intestinal mucosa has polysaccharide structure on their surface that is compatible to lectins. 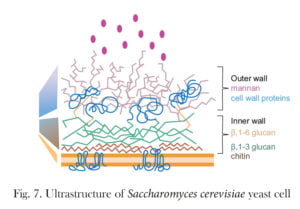 E. coli and Salmonella contain lectins on their surface which aid them to get attached to the intestinal epithelial cells and this will be prevented by MOS (Markovik et al., 1997). Yeast mannans have also been shown to act as immune adjuvants and directly initiate immune responses by binding to macrophages and dendritic antigen presenting cells that contain the C-type lectins of the mannose receptor (Sheng, 2006). 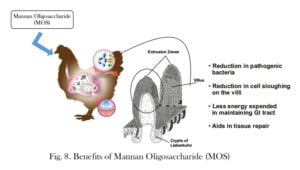 Characteristics of an Ideal MOS

• Should be stable at high temperature and acidic pH.
• Should sustain longer in the gut without much absorption for effective control of pathogenic bacteria like Salmonella and E. coli.
*Should have proven track record of in-vitro pathogen agglutination 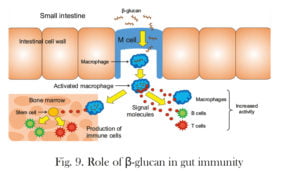 After absorption, macrophages break downβ-glucans into smaller particles and release them for number of days. Without macrophages will take longer time to digest pathogens. Activated macrophages will work more ef?ciently and kills intracellular and extracellular pathogens at a quicker rate. These activated heterophils will travel in blood stream and effectively control pathogens. There will be improved immune status of the birds and that will re?ect positively in all the production parameters

Synbiotics are a novel class of functional feed additives which are more effective than the individual components. With the shift away from the routine use of antibiotics in poultry production, synbiotics are gaining wide acceptance as an integral part of the feed formulation. Synbiotics in various forms help to modify the GIT microbiota, develop a strong immune system, improve digestion and FCR.
Thus, synbiotics offer a considerable promise for growth performance in poultry production and a better alternative to antibiotic growth promoters.

INFECTIOUS BURSAL DISEASE IN POULTRY, ITS DIAGNOSIS, TREATMENT AND CONTROL