Efficient feed utilization is key to profitability in commercial broiler chicken farming. Modern day broiler birds are very efficient in converting feed into meat. Despite this improved genetic potential of feed conversion, not all the nutrients are digested by birds’ digestive system and gets wasted in the form of non-starch polysaccharides (NSP’s), undigested proteins and lipids. To reduce this nutrient loss, enzymes are widely used in the feed to improve nutrient utilization and optimize feed cost. There are several enzyme solutions available in the market, which majorly focuses on digesting various NSP’s and proteins, thereby, more nutrients are available for absorption by birds’ digestive system. Nutrikem™ XL Pro is a Kemin’s solution, having a unique combination of xylanase, xylanase potentiating factor (XPF) and NSPases, multi-protease (acid, neutral and alkaline protease), slow releasing amylase (SRA), lipase and lysophospholipids. Nutrikem™ XL Pro aids in better digestion and utilization of NSP’s, proteins, fats and starch of diet and ensure increased absorption of nutrients.

A mass commercial broiler trial was conducted to compare the efficacy of Nutrikem™ XL Pro over the combination of commonly available individual enzymes in market, viz. xylanase and protease on broiler performance parameters. Nutrikem™ XL Pro contains lysophospholipids (Lysoforte® dry) and similar Lysoforte® was added to the individual enzyme group for effective comparison.

The broiler trial was done for a period of 36 days at a customer place in South India. A total of 43,342 (Cobb-430) day-old chicks were randomly divided into two treatment groups (Table-1). Each group comprised of five commercial broiler houses having deep litter system of rearing. The birds were fed with corn-soya based diet and both the groups were reformulated with a reduction of 0.8% crude protein (CP) and 80 Kcal energy in the formulation. Crumble feed was fed ad libitum in pre-starter, starter and finisher diets as per breed nutrient specifications in accordance with industry standard practices. The management practices and vaccination procedures were followed as per breed specifications for both the groups.

During the trial, performance parameters like mortality percentage and body weight were monitored and recorded weekly. At the end of trial, body weight, livability percentage, feed conversion ratio (FCR), European efficiency factor (EEF) were measured and economic benefits were calculated and compared. 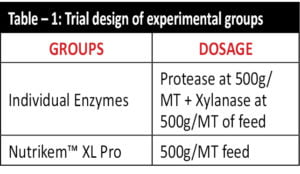 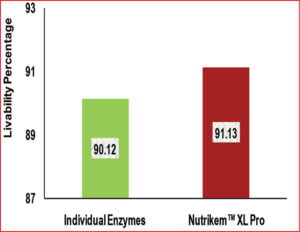 Figure-1: Livability percentage of treatment groups at the end of trial 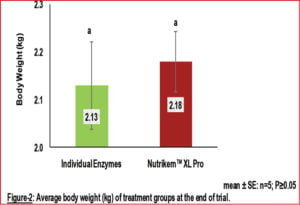 Figure-2: Average body weight (kg) of treatment groups at the end of trial 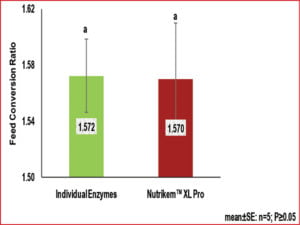 Figure-3: Feed conversion ratio of treatment groups at the end of trial 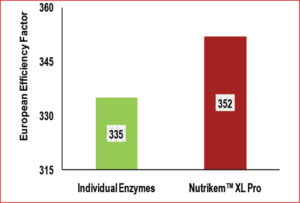 Figure-4: European Efficiency Factor of treatment groups at the end of trial 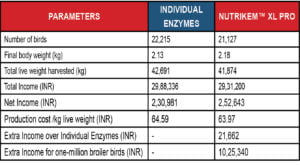 Economic benefits of the experimental groups

Importance of Synbiotic Application in Hatchery on Day 1