Emu the second largest flightless bird under the group ratites. Emu is scientifically classified as Dromius Noveahollandiae along with other members of the group ostrich, kiwi and rhea, other flightless birds, and is native to Australia. Emu Framing is spread all over the world with significant population in U.S.A, China, Australia and Asian countries. Emu is becoming popular for having 98% fat free red meat and other utilities obtained by products namely, Emu oil, skin, feathers, ornamental eggs and toes. Emu farming is in developing stage in India. Andhra Pradesh started Emu farming for the first time during 1998. Later breeding flocks spread over entire country for commercial purpose. Presently emu farming is being carried out in large scale in States of Andhra Pradesh, Tamil Nadu, Maharashtra Goa, Orissa Madhya Pradesh Karnataka and Kerala, at present there are 900 emu farms in 14 states. Since (2000) Department of Poultry Science, Veterinary College, Venkateshwara University Andhra Pradesh is doing pioneer work in the areas of research on Emu.

Emus have adapted to a variety of conditions ranging from the cold winters to the extreme heat. Emu bird lives in the grassy plains and dry open farms. Fully grown emu grow between 5 to 6 feet tall and weighing between 50 to 60 kgs. When it grows it changes its color thrice, in the beginning as it comes out of the egg up to 3 months there are stripes on its body, after 4 months it looks chocolate brown and after 1 year it again starts changing its color. The feathers on the neck fall off and neck looks bluish green. Generally 18-month-old female is capable of reproduction, however in some emus this period can extend up to 2 years, breeding occurs during winter season, breeding period is usually of 6 months (October to February in India), female mates with the male during breeding season and gives a clutch of eggs, emu generally gives eggs during evening between 5.30 to 7.00 p.m. Each adult emu after three years can give an average egg production of 30 eggs during breeding period, eggs are emerald green in colour weighing about 600 to 800 grams, compared to hen egg they are 10-12 times bigger, female emu may lay eggs after every 3 days, sometimes it lays eggs after 3 or 5 days. Later male sits for brooding on these eggs for a period of 52 days without food and water, chicks hatched out follow the male emu rather than female. However female continues to breed with new partners during the whole breeding season.
In large farm eggs are collected on regular basis and are stored in a cooler temperature of 60oF maximum up to one week, later they are set in incubator machines which are specially designed to hold emu eggs with a dry bulb temperature of about 96o to 97oF and wet bulb temperature of about 78o to 80oF (about 43% relative humidity) up to 48th day with regular turning mechanism every one hour, from 49th day eggs are shifted to hatcher till 52nd day, on that day chicks hatch out naturally, sometimes assisted hatch is also carried out manually by helping the chick to come out by opening the shell at the head and toe positions, normal hatchability is about 80%. Emu has a long life and lives at least for 40 years, If we look after them properly emus are capable of reproduction for at least 25 years, and can produce 32 young ones per year. So in simple terms a farmer keeps these birds, looks after them well and produces marketable goods.

Housing and Feeding Management of Emu:

Emu chicks weigh about 370 to 450 grams (about 67% of the egg weight), for the first 48 to 72 hours, emu chicks are restricted to hatcher itself for absorption of egg yolk and proper drying, brooding shed would be prepared well in advance with thorough cleaning and disinfection and flooring should be covered with gunny bags to prevent slipping of legs of young chicks, emu chicks have long legs and are very active, slippery flooring will make emu chicks to have hip dislocation resulting in irreparable damage. Arrange a set of brooder for about 25 to 40 chicks giving four sq.ft. per chick for first three weeks, provide brooding temperature of 90o F for the first ten days and 85oF till three to four weeks, provide feed and water with a brooder guard of 2.5ft height, feed starter mash for first 8 weeks, provide sufficient run space for the chicks to have healthy life. Hence floor space of 40ft × 30 ft is required for about 40 chicks with outdoor space.

As emu chicks grow they require bigger size of waterers and feeders and increased floor space for run, feed the birds grower mash till 42 weeks of age. 10% Greens (carrot, papaya, cucumber) can be offered, deworm the birds once with broad spectrum anthelmatic/ ivermectin and vaccinate with R2b at 8th week and repeat at 40th week against Ranikhet disease. Provide 40ft ×100 ft space for 40 birds.

Emu birds are seasonal layers and monogamous, require different nutritional requirements which are also varied during breeding season, high protein and micro nutrients are given during breeding. Because feed consumption will be reduced to fifty percent during breeding, after breeding a maintenance ration is given with low protein and low energy diet.

Emus are reared in open paddocks which will have chain link fencing of 2×2 or 3×3 enclosure with 2 ft. concrete wall construction on this chain link mesh of 6 ft. ht. is erected. Night shelter is optional with usual asbestos sheet roofing of 6 to 8 ft. Feeding is given in feed troughs which are usually hung on the fence and water is given in specially designed water tank or troughs with good drainage, feeding is done twice daily and water to be provided adlib.

Important Products of Emus and there utilization:

Is very important because it is about 97 to 98% fats free red meat which is similar in look to other red meats viz., beef, mutton, deer meat etc. Emu meat is rich in proteins, it contains plenty of iron vitamin B-12, hence as the modern research shows emu meat is an excellent diet for people suffering from heart ailments it is easily digestible very tasty and hence it serves as a very good alternative for mutton and chicken. Therefore there is a great demand for it in international market each bird can yield about 25 kg of meat.

Emu oil is semi solid white mass which is generally located all along back of bird but when it is processed and refined it is a clear liquid because of its properties such as bacteriostatic, antinflamatory, faster healing, and emulsifier, it is utilized for treatment of various conditions namely arthritis, skin treatment, burn injuries, hair loss etc.

Emu skin is of high quality very soft and smooth with usual yield of about 6 to 8 sq.ft. per bird which is used in preparation of leather products including apparels. The leg skin is very unique and with scales similar to crocodile skin and is being used in protective things for knives, swords and shoe top etc.

Feathers of emu bird are double quilled, attractive, soft, light and non-allergic, because of these properties. They are having high demand in the fashion, art and craft industries. Are used as feather duster, feather pad, fans, bows, masks, finishing metals prior to painting, weather-proof apparels, pillows, blazers, sweaters, jewellery and craft items.

The unfertilized eggs which are used in crafting antique mementos for sale with different carving on the shell. Emu nails are also been used as key chains, pendants in necklaces.
Emu farming in India presently concentrated in Southern States with usual importance given for breeding. Farmer buys 10 to 15 pairs from a big breeder and has an option of becoming a self sustained breeder to produce chicks for sale or an integrated farmer to sell hatching eggs back to the integrator, the products sale in India is yet to take shape due to lack of awareness and non-availability of sufficient emu population. The future of this industry will be diversified into emu farming for fattening and breeding. Emus raised for fattening will be fed with different rations so that they will gain body weight at the earliest and yield all the products suitably, the preferred age for fattening is less than 24 months and ideal is 12 months. Present estimate of Emu population in India is above two lakhs. The biggest Farm is in Andhra Pradesh with 6000 Emus at one place. Vijayawada, West Godavari, Hyderabad, Chittoor and Nellore, in AP, Coimbatore, Namakkal, Erode and Hosur in TamilNadu, Gokak, in Karnataka, Pune and Nasik in Maharashtra are production belts for Emus. 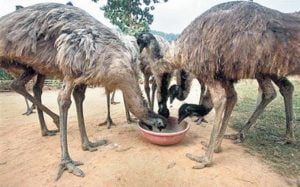 PREVENTION AND CONTROL OF SALMONELLA INFECTION IN POULTRY