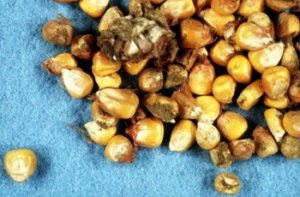 Harvesting of crop is seasonal, but consumption of food grain is continuous. The market value of the produce is generally low at harvesting time. So the grower needs storage facility to hold a portion of produced grain to meet the requirements in addition to selling surplus produce when the marketing price is favourable.

Traders and Co-operatives at market centres need storage structures to hold grains when the transport facility is inadequate. The government also needs storage structures to maintain buffer reserves to offset the effects produced by the vagaries of nature. Hence, there is necessity to store the produce for different periods primarily for commercial reasons. However, during storage considerable damage in poultry can be caused by moulds and insect infestations. Insects are present in most grain-handling systems and it is almost impossible to eliminate them completely. Control of moulds and insect is very much important to prevent poultry feed spoilage during storage. 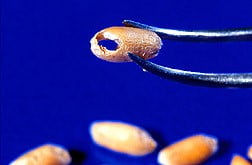 Damage from moulds can be prevented by proper drying and aeration of the grain. However, considerable damage can also be caused by insect infestations which can occur in dry grain. Insects are present in most grain-handling systems and it is almost impossible to eliminate them completely. However, loss from insect damage can be kept to a minimum by using the following program: 1. Remove all dust and old grain from bin walls, ceilings, floor and aeration ducts before refilling the bin. 2. Repair cracks from where insects might enter. 3. Spray inside the bin with a residual insecticide at least one a week before storing new grain. 4. Never store new grain on top of old since insects will move from the old grain into the new. 5. Cool grain as quickly as possible. Insects cannot reproduce at temperatures below 18°C. 6. Check stored grain regularly to detect hot spots. 7. Fumigate difficult insect infestations.

CONTROL OF FUNGUS FEEDING INSECTS Be sure the grain is in good storage condition by:

Chemical control of fungus-feeding pests is not necessary, since they cannot survive in sound, dry grain.

.  There are 4 main options for controlling insects feeding on stored grain.

An effective method of controlling insect infestations in stored grain in winter is to lower the temperature of the grain. Rusty grain beetles and most other stored grain insects can be killed by periods of low temperatures as follows:

Grain in bins over 6 metres in diameter will not cool sufficiently without assistance, such as through aeration, to control some insects.

All four stages of insects (eggs, larvae, pupae and adults) will die if subjected to high temperatures for a sufficient period of time.  The most realistic use of high temperatures for controlling insects would be when the grain was tough and in need of drying.  In this case, the insects would be killed at the same time as the grain is dried.  The insects need to be exposed to temperatures in the range of 50 to 55˚C for approximately 15 minutes. 3. Moving Grain The use of pneumatic conveyors to move grain has been shown to give good control of some insect pests of stored grain.

Chemical treatment of the bin is another option. Diatomaceous earth can be used for control of grain feeding insects in many stored grains.  It is sold under the trade names Protect-It or Insecto. Fumigants containing aluminium phosphide, such as Phostoxin, are available in pellet or tablet form.  These fumigants should be used only when the grain temperature is above 4oC. The use and sale of aluminium phosphide in Manitoba is restricted to licensed pesticide applicators possessing a valid stored agricultural products license.

Prospects of Emu Farming in India