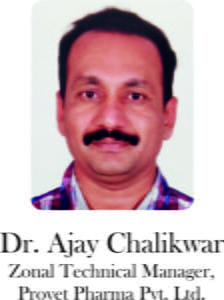 E.coli has emerged as a major infection in broilers, layers and breeders and is commonly encountered in almost all the poultry operations including hatcheries, meat processing plants, etc. irrespective of a good water sanitation programme.

Focus now is on E. coli infections in poultry and there effective control through the use of non-conventional therapies like Bacteriophages.

Diseases caused by E. coli are mostly systemic in poultry unlike mammals, where it causes gut related diseases. Most APEC strains are motile having peritrichous flagella, survive freezing and persist for extended periods at cold temperatures.

Reproduction of most strains is inhibited by a pH of less than 4.5 or greater than 9, but the organism is not killed. It is commonly seen as a secondary infection to other bacterial / viral infections and rarely as a primary infectious agent, but recent trends show that they have the ability to cause disease on their own.

It is a typically localized or systemic infection when host defences have been impaired. E. coli is the most frequent cause of mortality and can be isolated even from dead birds.

Normally poultry house dust contains 105 to 106 CFU/g of E. coli inside the houses and outside up to 40 feet area under dry conditions, but wetting reduces the count by 84-97%.

Economic impact of APEC is mainly due to:
• Mortality
• Morbidity
• Slower growth rates
• Poor FCR
• Decrease in egg production • Downgrading of carcass • Spread of antimicrobial resistance to other bacteria

Antigens are classified according to Kauffmann scheme. It contains 3 major antigens like 0 (somatic), H (flagellar) and K (capsular). Currently there are approximately 180-0, 60-H and 80-K antigens. The 0 antigen determines the serogroup & addition of the H antigen and sometimes K antigen determines serotype.

Adhesins – Fimbrial or non-fimbrial F1 fimbriae may be expressed during initial colonization whereas P fimbriae are expressed later when the organism is in the lower respiratory tract or body tissues. Bacteria are killed rapidly following expression of F1 fimbriae by macrophages.
Iron acquisition methods – Ability of APEC to obtain iron is well documented.

Protectins – Resistance of APEC to complement is related to K1 capsule, smooth LPS layer, and Outer membrane protein. Increased serum survival gene (ISS) in APEC has its role in complement resistance with a ColV plasmid which increases virulence in day old chicks by 100 times.

It has inherent ability to form biofilms on abiotic surfaces like plastic/metal waterlines and protect itself from getting killed by the sanitizers.

Certain plasmids may also contribute to APEC’s acid and bile tolerance, affecting survival of APEC in the bird or elsewhere. Regional variations exist as far as resistance is concerned, as some strains are still susceptible. 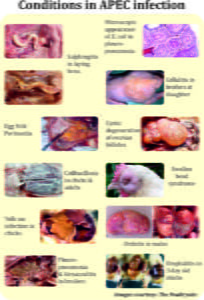 E. coli control through the use of Bacteriophages

Bacteriophage is a non-pathogenic virus with a vast majority (about 96%) of known phages belonging to Myoviridae, Podoviridae and Siphoviridae. They are known as bacterial parasites because they lack the cell structure and enzyme systems necessary for food uptake, protein synthesis or construction of new particles, and as incomplete organisms can only replicate in a live cell.

Positive results of the use of bacteriophages in fighting bacterial infections have contributed to the research on the potential use of viruses that destroy bacteria in treatment of diseases in both human and animals. Their specificity and range of activity are determined by the presence of receptors located on the surface of bacterial cells, among which we can distinguish LPS fragments, fimbriae and othersurface proteins.

No mortality was observed in chickens treated with 108 PFU of an E. coli bacteriophage mixture. Due to the specificity of bacteriophages for a particular bacteria, manifested as the ability to infect only one species, serotype or strain, this mechanism of action does not cause destruction of the commensal intestinal microflora. A cocktail of more than one phage (at least 3 – 4) in sufficient concentration is synergistic.

Phage acts like a typical virus, it hijacks its host cell and uses cell’s resources to make lots of new phages thereby causing lysis of the cell and death subsequently. Phages attach, enter the cell, copy DNA and synthesize protein, assemble new phages and cause lysis of the host cell with release of daughter phages capable of infecting other cells.

Phage reproduces without killing its host. Some phages use the lytic life cycle and some switch between the 2 cycles. Here, there will be attachment of phage to host cell, injection of DNA into host cell, integration with bacterial chromosome and becoming prophage and finally cell division along with host cell. 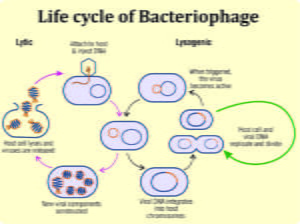 Under the right conditions, the prophage becomes active and comes back out of bacterial chromosome, triggering lytic life cycle and killing the host cell.

Lead phage has very virulent activity and neutralizes a bacterial population within few hours of inoculation against a wide spectrum of E. coli.

Associate phage has lower virulence than lead phage but has very wide spectrum of activity and is very stable. This phage covers the bacterial population which evades the action of lead phage.

Guard phage is similar to associate phage in spectrum but can attach to a different kind of receptor with different mode of action and is mainly added to ensure protection against resistant E. coli. Synergistic action of these 3 phages will ensure complete bactericidal action.

Bacteriophage therapy is a very good solution as preventive measure in chicks in the first week and as a therapeutic thereafter as per the infection pressure.

Bacteriophages can be given orally, by aerosol spray or parenterally or along with antibiotics in case of severe E. coli challenge and can be given along with all live and inactivated vaccines (except live E. coli vaccine).

Bacteriophages enter blood circulation upon oral administration and control E. coli systemically. Under the right conditions, the prophage becomes active and comes back out of bacterial chromosome, triggering lytic life cycle and killing the host cell.

A Brief Overview on Major Poultry Diseases in Rainy Season