The major feed ingredients that are commonly used in commercial poultry feed are cereal grains, oil seed meal and grain by-products. A major portion (60 – 80%) of the total phosphorus present in these ingredients, occur in the form of phytic acid. Phytic acid (phytate) is a complex of Ca or Mg with myo-inositol (Cosgrove, 1980) and is an essential component of all seeds. Phytic acid is considered as anti nutritional factor in poultry because it binds with phosphorus and other important nutrients and thereby decreases their availability (Cabahug et al., 1999).

Among common feed stuffs oil seed meals and cereal by-products contain large amount of phytate phosphorus whereas cereal grains and grain legumes contain moderate amounts. Aleurone layer is the major site of phytate deposition in cereals and in dicotyledons seeds phytate is distributed throughout the kernel (Lott, 1984). In rice more than 80% of the phytate is present in the outer bran and in maize around 90% of the phytic acid is concentrated in the germ portion (O’Dell et al., 1972). Among the common feed stuffs, sesame meal and rice bran have the highest level of phytate.  Concentrate of phytate in poultry rations ranges from 2.5 to 4 g/kg (Ravindran et al., 1995).

Phytate forms complexes with cations in the following descending order:  Cu2+>Zn2+>Co2+>Mn2+>Fe3+ >Ca2+ (Vohra et al. 1965). One molecule of phytic acid binds with 3 to 6 molecules of Ca to form insoluble complex at the pH of small intestine. Excess Ca in the diet leads to the formation of calcium phytate complexes which are highly insoluble and poorly digested. Zinc forms the most insoluble salt with phytic acid, therefore zinc is a limiting mineral in high phytate diets as it forms a highly insoluble complex at pH 6.4, which is the pH of the upper intestine where most mineral absorption occurs (Maddaiah et al., 1964).

Phytate forms complex with the protein and decreases their availability. Protein-phytate complexes are formed in the GIT (Ravindran et al., 2000). The formation of protein- phytate complex begins in the seed during ripening when phytate accumulates primarily in the aleuronic layer of monocotyledonous seeds and in the protein bodies of dicotyledonous seeds (Ravindran et al., 1995). 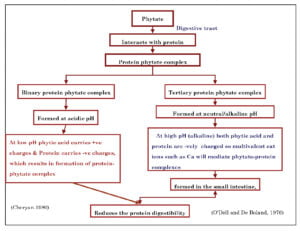 Phytate inhibits digestive enzymes such as pepsin, alpha- amylase and trypsin (Deshpande and Cheryan, 1984). Phytate inhibit the proteolysis by altering the protein configuration of digestive enzymes (Singh and Krikorian, 1982). Phytate binds with trypsin via Ca forming a tertiary complex and thereby inhibits the trypsin activity. Inhibition also results from the chelation of Ca ions which are essential for the activity of trypsin and alpha-amylase (Liener, 1989).

Phytic acid decreases the bioavailability of P, Ca, Mg, Zn and many other trace elements. Hydrolysis of phytic acid occurs through various processing effects or by phytase enzyme. Phytase is a phosphatase enzyme which hydrolyses phytic acid to inositol and inorganic phosphorus, leading to improved phosphorus utilization (Singh et al., 2003).

Sources and Activity of Phytase 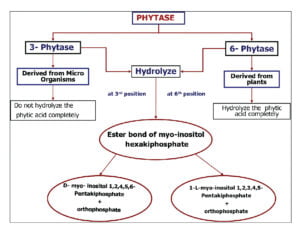 Among all sources Aspergillus niger is the most active source of high phytase activity and Aspergillus ficuum produces highest concentration of phytase and phytase from A. ficuum is highly thermo stable. In mammals, phytase is produced in the brush border region of small intestine but the concentration is very less (Cooper and Gowing.1983). In poultry also phytase is produced from brush border region of intestine but the activity is of little significance (Maenz et al.1997). The activity of phytase is measured in terms of inorganic phosphorus released from phytic acid and the activity is known as phytase unit (FYT). One phytase unit is the amount of enzyme needed to release 1 µ mol of inorganic phosphate/ min from 5.1mM Sodium phytate at pH 5.5 and 37o C (Engelen et al., 1994).

Phytase increases bioavailability of P, Ca and amino acids. Supplementation of microbial phytase increases body weight gain, feed intake, feed efficiency and overall growth performance in broiler chickens (Singh and Khatta, 2002; Singh et al., 2003, Karim 2006). Nelson et al. (1971) were the first to supplement 0.4% crude phytase (produced by A. ficcum) in corn soy based broiler diets and noticed a 33.3% improvement in BWG. The improvement in growth performance in chickens fed with phytase may be due to increased bioavailability of phosphorus by phytase, increase in feed intake and feed efficiency, increase utilization of inositol (Simons et al., 1990), improvement in starch digestibility (Knuckles and Betschart, 1987), improved utilization of protein and amino acids and overall utilization of nutrients.

Availability of Protein and Amino Acids

The factors affecting protein utilization to added Phytase: a) Concentration of phytate in feed ingredients: Magnitude of response to phytase is directly proportional to concentration of phytate in ingredients and poorly digestible feedstuffs show more response to phytase than those with higher inherent digestibility (Ravindran et al., 1995). b) Source and concentration of protein in the diet. c) Digestibility of the protein. d) Ca and P levels in the diet, and e) Rate of inclusion phytase.

Effect of Phytase on Phosphorus and Calcium bioavailability

Availability of Other Minerals

Phytic acid has the strong chelating potential to form complexes with cations and their by decreases their availability. Phytase hydrolyzes the phytic acid and releases variable amount of bound minerals. Supplementation of microbial phytase increases the retention of Zn from 27.6% to 34.7%. Phytase improves Zn utilization by reducing Zn excretion in broilers and there by reduces requirement of Zn in broiler diet (Jondreville et al., 2007). Phytase increases the retention of Cu from 2.46% to 5.4% in broilers fed low P diet and improves utilization of Mn in broiler chicks (Mohanna and Nys.1999).

Phosphorus is one of the costliest item in poultry feed. Replacement of inorganic phosphorus by phytase enzyme leads to more economic poultry production. Supplementation of phytase @ 25 g /100 kg in corn- soy-wheat bran based diets without DCP reduced the feed cost (Vinil et al., 2000). Supplementation of broiler diets with phytase @ 300 gm / ton of feed without DCP resulted in increase in net income by 9.47% (Kundu et al., 2000).

KNUCKLES, B.E. AND BETSCHART, A.A. (1987) Effect of phytate and other myo-inositol phosphate esters on alpha-amylase digestion of starch. Journal of Food Science 52: 719-721,

KUNDU, B., BISWAS, P., RAJENDRAN, D. AND DANDOPATH, S.K. (2000) Effect of supplementation of phytase enzyme and gradual replacement of dicalcium phosphate on the performance of commercial broker chicken. In: Proceedings of III Biennial conference of Animal Nutrition Association. Hisar, India. Abst. No. 128.

MITCHELL, R.D. AND EDWARDS, H.M. (1996) Effect of phytase and I, 25-dihydroxycholecalciferol on phytate utilization and the quantitative requirement for calcium and phosphorus in young broiler chickens. Poultry Science 75: 95-110.

VINIL, S.P., KADIRVELAN, C., THIRUMALAI, S., VALLI, S. AND CHANDRABOSE, B. (2000). The role of phytase and other enzymes in augmenting the bioavailability of nutrients in broilers. Proceedings of XX Annual conference of Indian Poultry Science Association, Chennai, India. Abst. No. PPN. 97.

MINERAL COMPLEXES IN FEED FOR HIGHER BIOAVAILABILITY OF MICRO-MINERALS