One of the most significant ways of enhancing nutrient digestibility is the use of enzymes. In most practical diets for poultry, the three most expensive nutrients are: energy, protein, and phosphorus. Although we have managed to procure successful commercial enzymes that enhance the efficiency with which birds derive energy and phosphorus from their feed, the animal nutrition industry has not been so successful in the case of protein. In truth, early attempts have been more than disappointing for many enzyme producers.

There are several reasons for this, including inadequate research and development, difficulties in producing a commercially viable enzyme, and of course, the uphill battle against the naturally high digestibility of most conventional feed ingredients. Birds are already digesting their feed quite well! However, the largest failure must have been the lack of resources and perseverance.

The most obvious question that we must first answer is why poultry diets require such an enzyme. The answer is quite clear when profitability comes into the picture particularly in today’s scenario where the raw material prices are sky rocketing. Today, the technology of producing an enzyme has advanced to such a high degree that it makes it economical to use enzymes even under the most unfavorable conditions in terms of feed ingredient prices. For example, the addition of protease enzyme has been shown to reduce feed cost on average by 5%, even after considering the actual cost for the enzyme. In today’s tight financial times, a 5% reduction in feed cost alone can be the key to survival for many operations worldwide.

This reduction in feed cost is achieved by means of lowering protein (amino acids) specifications to consider the improved digestibility of protein in natural ingredients. Thus, the inclusion level of soybean meal, one of the main protein-rich ingredients is reduced, and of course, the need to add synthetic amino acids is also reduced significantly. Of course, the exact savings depend on the actual ingredients used and their prices.

Research has also shown that the use of protease enzyme also improves overall animal performance. This is the result of the beneficial effects of a low-protein diet, which minimizes the metabolic strain of excreting surplus nitrogen, with the added benefit of leaving more dietary energy available for growth. This effect is not a new discovery, unique to proteases, but something well known to scientists for many years and applicable to all monogastric species.

Another indirect benefit from the use of a protease that improves protein digestion is that nitrogen excretion in the environment is markedly reduced which is a great advantage for the producers during the winter months. Thus, protease enzyme not only enhances the digestibility of protein, leaving less natural protein undigested, but the low-protein diets used in conjunction with the enzyme are better balanced in terms of amino acids, leaving less surplus to be disposed of through metabolism.

On average, protease enzyme enhances protein & amino acid digestibility by 3-7% and as such it should be expected to reduce nitrogen excretion significantly. Again, these are averages obtained through numerous research trials and field observations in the past ten years of development and use in the field. Actual numbers will differ according to ingredient selection and current dietary protein specifications.

The main reason broiler producers as well as feed producers require a protease enzyme is profitability. Protein raw material prices have shown a sustained upward trend over the last few years. Despite abating a little in the last few months, the general consensus of independent observers is that prices will continue to increase in the future. This is the consequence of consumption exceeding supply on account of demand from emerging economies, and the impact of bio-fuel production on the composition of harvested areas across the world. A protease which can consistently improve the digestibility of amino acids in such materials, thus reducing their inclusion level in feed while maintaining current levels of animal performance, is therefore economically very attractive.

Direct cost savings at the feed mill, however, are by no means the only reason for considering a protease (Figure 1). When a suitably efficacious protease is used, it can be an important contributor to the continued economic viability, sustainability and consumer perception of the broiler industry. 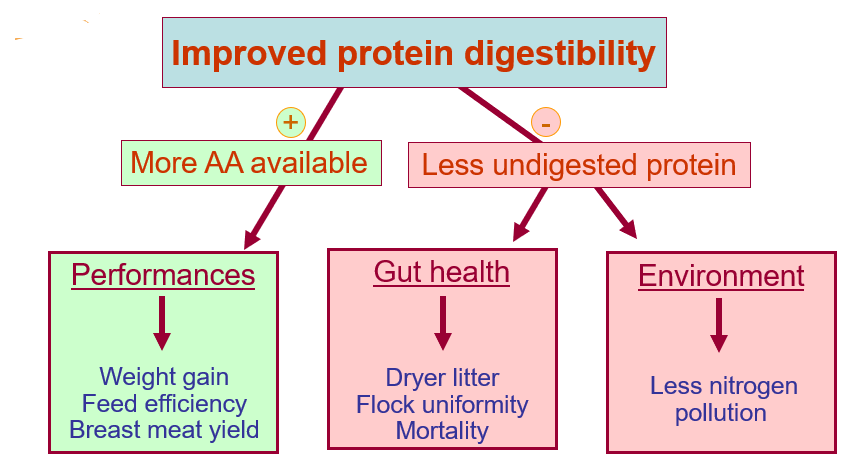 Not all proteases are the same:

For a protease to be successful in feed it should, like any other enzyme, be selected and developed with that specific use in mind. Unfortunately, many of the first proteases entering and, in many cases, still available for use in the feed industry were developed for other purposes. non-specific alkaline proteases initially derived from Bacillus subtillis and developed for the detergent industry, with characteristics which render them less effective in feed.

The recent development of unique feed protease specifically selected for application as a feed enzyme, has overcome many of these issues. Unlike most other commercially available proteases, it is produced from a genetically modified strain of Bacillus licheniformis. In the selection process, factors such as the ability to degrade many different feed proteins; the need to complement the endogenous protease enzymes; activity after exposure to the low pH conditions of the gizzard and proventriculus; and stability during feed processing were all considered.

Probably one of the most important criteria for success of a protease in broilers is good stability under low pH conditions found in the bird’s stomach. The level of viable enzyme reaching the ileum is thus also limited. In contrast, with Bacillus licheniformis derived protease, stability at low pH is greatly improved, ensuring sufficient enzyme activity in the small intestine to give the desired hydrolytic effect. For a protease to work successfully, it is essential that it should complement the endogenous enzymes. The bird’s stomach and small intestine already produce pepsin and pancreatic proteases, respectively. The exogenous protease must work in synergy with these enzymes to obtain the optimum benefit in all but the very young bird, where endogenous levels may be limiting.

For a protease to be commercially useful it must be possible to use it flexibly in a diverse range of diet types. The ability to improve the digestibility of protein from as wide a range of feed ingredients as possible is therefore important. Protease should have the potential to improve digestibility of protein in a wide range of ingredient sources in vitro. Such improvements should however not just be obtainable in vitro but also in vivo. In vivo, both ileal and faecal amino acid digestibility studies have confirmed the significant improvements in digestibility for a wide range of different raw materials when Protease enzyme is added. 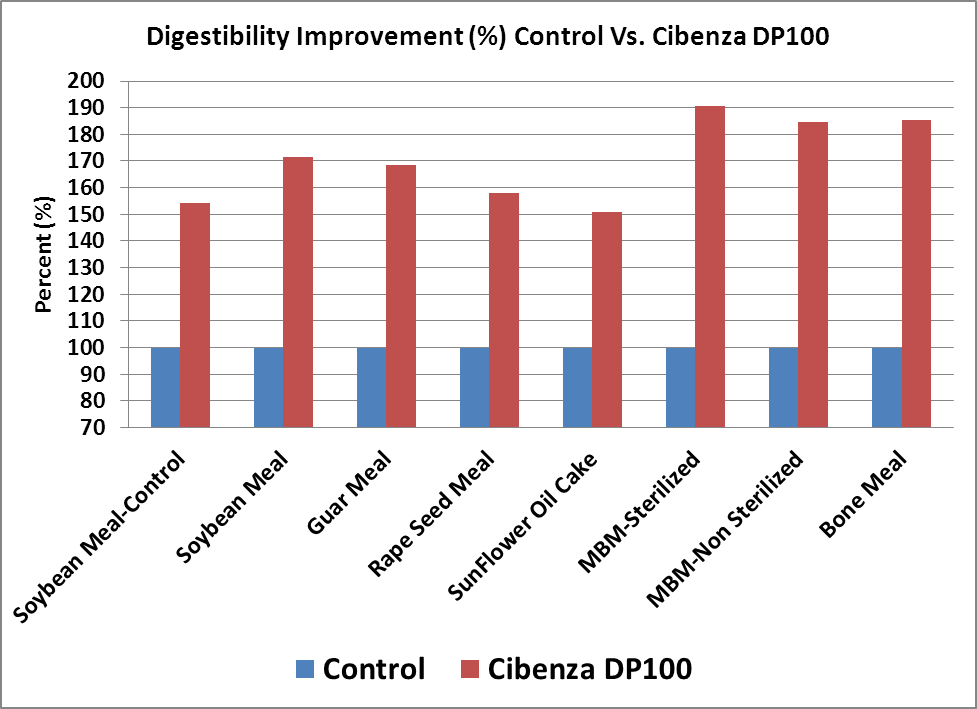 As the conditioning time and temperature during the production of pelleted broiler feeds becomes ever higher and longer to ensure compliance with increasingly stringent food and feed safety requirements, stability of feed enzymes under more extreme conditions is increasingly essential. To this end, for a protease to be successful, thermostability is a must. Protease enzyme is consistently more stable at each of the conditioning times and temperatures tested, demonstrating its superior stability even under more demanding conditions. 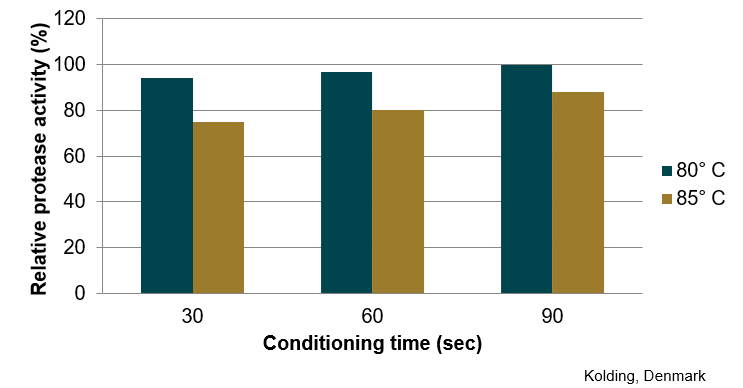 The determination in the laboratory of the TI content of SBM and its relationship with AA availability is tedious and time-consuming and provides inconsistent results. Also, the traditional processes of treating SBM can’t remove the anti-nutritional factors to a safe level. Therefore, use of exogenous protease is very effective in reducing the deleterious effect of TI in SBM. Liu et al., in 2013 conducted a study wherein they used a protease enzyme (CIBENZA EP150) with different levels of TI and found that protease enzyme was able to destroy almost all trypsin inhibitors (both Bowman-Birk & Kunitz TI) present in soyabean meal (at 1:1 ratio) and destroy substancially even in higher concentración (2:1) of TI as well. CIBENZA® EP150 can destroy almost all trypsin inhibitors present in soyabean meal (at 1:1 ratio) and destroy substancially even in higher concentración (2:1) of TI as well

Conclusions:
The benefits of including a protease enzyme in broiler diets are confirmed in numerous published reports. Such research shows that this protease can improve the protein digestibility of a wide range of natural ingredients by 3-7%. Such improvements translate into significant cost savings per ton of feed and are achieved without any compromise on animal performance.

FIRST ONLINE ROUND TABLE OF STARTUPS IN POULTRY SECTOR ORGANISED BY CPDO&TI, ON 10TH FEBRUARY, 2022