The domestic rearing of ducks for food purpose can be traced back at historic times. In recent year duck farming has gradually grown and become a serious segment in poultry meat industry especially in Asia. The changing lifestyle, food consumption pattern, tastes preference of the consumer bringing the duck food in front line in their menu. With the increasing demand for poultry meat in this part of world, the duck industry has commenced to follow the same pattern of broiler industry. More specialized business venture are been established along with the marketing use of modern production facilities as well as up-to-date processing plants and products marketing strategies. 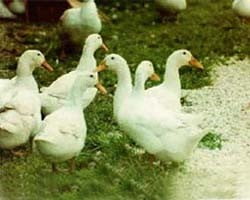 Duck has been appreciated for its taste and nutritional qualities by most of the meat loving population. Today duckling is in high demand in the whole world especially in Asian countries. The preference of duck meat depends upon the breed of duck and the method of preparation which varies widely depending upon region and the demand of the consumers. In Northern America, parts of Europe, Australia and in many other areas as well, roasted duckling are a very popular item. Roast, braised or barbecued duck are few of the popular duck cuisine around the world. More recently duck parts, such as breast and legs have become more available, which offer more options for diet conscious consumers. Precooked duck parts which can be quickly heated in a microwave are also becoming more available and popular. China is by far the leading country for duck production with an annual production of about 75% of all duck slaughtered and about 66% of all duck meat produced in the world (FAO, 2018) followed by France.

Muscovy: The Muscovy breed is easily identified by its red knobby nodules along the eyes and above the base of the bill, it is the leaner variety and the meat is darker. Muscovy is a heavy breed.

Pekin: The Pekin breed is native to China. Pekin ducklings are ready for market at age two to three months. The white Peking duck, often sold under the name Long Island duckling, are the ones most often available in supermarkets today. This breed is the most demanded for its quality meat, tremendous taste and flavor.

Broiler or fryer: These ducks are young (under 8 weeks) and tender, roaster duckling (under 16 weeks) is starting to harden, and mature duck has tougher flesh.

Duck meat can be categorized into two types.

• Fresh duck should be odor-free and have clean skin with no pinfeathers.

• Frozen duck should have a plump breast and wrapped in an airtight package.

• Duck liver/foiegras, is highly perishable and will only keep for 3 to 4 days in the refrigerator once the package has been opened.

The dressing percentage of duck is around 65-71% (Omojola, 2007)and it varies with the age and sex of the bird. Some important characters of duck meat are,

Duck meat is considered as “white” meat, even though its meat is considerably darker than other poultry meats such as chicken or turkey. The reason for this is ducks are more active in comparison to chicken therefore they need and use up more oxygen. The extra oxygen in the body of the duck or other types of game bird, gives their meat the darker red color due the higher content of muscle myoglobin.

Aroma of duck meat: The aroma of duck meat is relatively stronger than other poultry meats. It has been found that the flavor of meat is positively correlated with lipid content (Chartrin et al., 2006b) and the higher fat content of duck meat may cause the stronger flavor.

Low demand for duck meat positively correlates with the low consumption of duck meat. The low level of consumption of duck meat is governed by many factors in comparison to chicken meat, reflected in low levels of duck meat acceptance and preference by society, the reason behind this constraints are, the unavailability of the meat quality ducks breeds, lower production level, difficulties in the slaughtering, lack of demand for ducks and weakness of market system for selling duck meat products (Oteku et al.,2006). The holistic approach towards the development of healthy, safe and nutritionally enriched duck meat can remove stigma adhere with the duck meat. The efforts to solve these problems focus should be on the researchers and government to popularize the duck meat as a food choice and to undertake necessary policy. A persuasive approach and good policies from the government will hopefully attract the society to use duck meat in greater quantities.

6. Omojola, A.B. 2007. Carcass and organoleptic characteristics of duck meat as Influenced by breed and sex. International Journal of Poultry Science 6 (5): 329-334.

9. USDA, 2006. Duck and goose from farm to table. US. United States Department of Agriculture Food Safety and Inspection Service. http://www.fsis.usda.gov/factsheets/Duck_&_Goose_from_Farm_to_Table/index.asp.

Importance of Biosecurity Measures in Poultry