The betaine, trimethyl derivative of amino acid glycine, is a metabolite of plant and animal tissues. It is commonly used in poultry, sow and aquaculture diets. In plants, betaine is particularly synthesised and accumulated as an osmoprotectant against salt and temperature stress. In animals, betaine is the product of choline oxidation or originates from nutritional sources like whole grains, wheat bran , wheat , marine organisms, spinach and beets are good source. Due to its chemical structure, betaine shows the characteristics of a dipolar zwitterion resulting in osmoprotective properties. Promoting effects on the intestinal tract against osmotic stress occurring during diarrhoea or coccidiosis have been reported following betaine supplementation in poultry. The application of betaine in laying hen diets, however, is of increasing interest due to its cost effectiveness and the fact that it provides solutions for problems like fatty livers, wet litters and heat stress.

In poultry nutrition it becomes more common to implement a replacement strategy for all choline and partially methionine by betaine. This concept leads to lower feed cost, while maintaining production performance. It is known that the reduction in methionine affects egg weight and egg mass, as one of the main functions of methionine is to be used in the synthesis of proteins besides being involved in phospholipid synthesis, affecting the formation of yolk. Supplementation with betaine will compensate the partial reduction of methionine and removal of total choline chloride added. This can be explained by the fact that betaine has the ability to donate methyl groups in the same level as methionine and even more effectively than choline chloride. 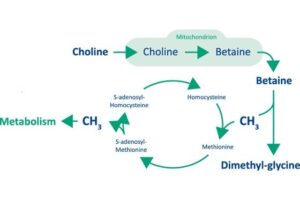 Depending on the exact strategy followed and on price levels of choline, betaine and methionine, the economic calculation may differ, but in general a return on investment of 1:2 or higher can be expected, leading to significant cost price reductions. Replacement of all choline chloride and a partial replacement of maximum 10% of total methionine seem to be a safe strategy.

Betaine is a compound that has been well established in literature as an osmolyte; enabling cellular efficiency to decrease energy needs so livestock can live up to its full potential in production. Choline requirements can be fulfilled in the diet from raw ingredients. Betaine can donate directly one of its methyl groups into methylation cycle, whereas choline requires a 2-step enzymatic transformation in the mitochondria within liver cells. Therefore, betaine will be more efficient as methyl donor compared to choline. Extra betaine molecules are able to infiltrate cells to maintain (intestinal) cell integrity, protein structure, and homeostasis. Maintaining intestinal cell integrity and gut health is the foundation of improving nutrient digestibility and production.

Supplementation of betaine in diet has shown positive results on production performance parameters in many animal species. In laying hens, a dose-response study was reported. Increasing betaine levels by 600 or 800 g/t significantly improved the laying rate percentage and FCR.

3. Calcification of the egg shell:

Not to be overlooked is the quality of dietary protein, which should contain well balanced essential amino acids, in particularly methionine, for the synthesis of proteins forming the shell support base. While contributing with less than 1% of eggshell weight, the protein component has a very important role in the calcification of the shell, taking part in the core processes of support and modelling limestone structure. Replacing 567 g/t methionine by 454 g/t betaine looks promising not only by acting as a methyl group donor, but also to improve osmotic status and ionic tolerance of membranes; intestines; liver and kidneys.

Another important feature of the addition of betaine in poultry diets is the lipogenic capacity, responsible for reducing abdominal fat and prevention of fat accumulation in the liver. The excessive accumulation of fat in modern laying hens is a worldwide problem that may cause fatty liver syndrome and lower egg production and quality.

Carnitine is a cofactor for transformation of free, long-chain fatty acids into acylcarnitines, and the transport of fatty acids into the mitochondrial matrix, where they are used for cellular energy production. For synthesis of carnitine, methylgroups are required from the transmethylation cycle. As such, adding betaine to the diet increases carnitine levels in the body and prevents fatty liver problems. A crucial enzyme, betaine aldehyde dehydrogenase, is responsible for synthesis of both betaine from choline, as well as for the synthesis of carnitine from lysine and other methyl groups. Studies suggest that the enzyme has a preference for choline-betaine conversion. Due to competition for betaine aldehyde dehydrogenase, choline supplementation might decrease carnitine synthesis; therefore, it might be of greater benefit to supplement with betaine rather than its precursor i.e. choline. Betaine supplementation enhances the lipase activity and provides a decrease in the concentration of triglycerides and cholesterol in the body.

Another point of interest is the pathway of betaine as an osmolyte. Replacement of methionine by betaine also leads to lower faecal water levels. Both in high methionine and low methionine diets, betaine reduced faecal water content with 39% and 26% respectively. Given the large number of metabolic and physiologic functions, the use of betaine will help to promote maximum animal performance

7. Influence on litter moisture and mortality:

Another important parameter in management of poultry is litter moisture. Improved digestibility and intestinal cell growth have been associated with added betaine. These factors are attributed to improved water retention of the animal and thus controlling excreta.
Increased litter moisture decreases litter quality and can lead to production issues and can increase problems with footpad quality and dirty eggs. Improving nutrient digestibility by supplementing betaine can also impact litter moisture.

As a potent osmolyte, betaine enables animals to be better equipped to handle environmental stress which is a daily occurrence for layers in peak production. The osmotic properties of betaine were hypothesised to be stored into the egg, allowing the egg to reduce cell and protein degradation associated with egg quality.

Conclusion:
Betaine supplementation in layer diet reduces mortality and litter moisture, is a useful tool for producers to improve overall layer live ability. By increasing the efficiency of osmoregulation, the surplus of betaine may be reducing protein degradation in the egg; therefore betaine improves egg quality and prolongs freshness.

Time to Address the Rise of Antibiotic-Resistant E. Coli in Poultry