Poultry farming is the raising of domesticated birds such as chickens, turkeys, ducks, and geese, for the purpose of farming meat or eggs for food. . More than 50 billion chickens are raised annually as a source of food, for both their meat and their eggs. Chickens raised for eggs are usually called layers whilst chickens raised for meat are often called broilers. Poultry industry which provides cheap source of animal protein has taken a quantum leap in the last three decades evolving from a near backyard practice to a venture of industrial promotion. Poultry is one of the fastest growing segments of the agricultural sector in India today. While the production of agricultural crops have been rising at a rate of 1.5 to 2 percent per annum that of eggs has been rising at a rate of 8 percent per annum. India is on the world map as one of the top five egg producing countries with 55.6 billion eggs produced during 2008 (FAO). Poultry egg and meat are important sources of high quality proteins, minerals and vitamins to balance the human diet. Specially developed breeds of egg type chicken are now available with traits of quick growth and high feed conversion efficiency. Depending on the farm-size, layer  -farming that can be the main source of family income or can provide income and gainful employment to farmers throughout the year. Poultry manure has high fertilizer value and can be used for increasing yield of all crops. Commercial hens usually begin laying eggs at 16–20 weeks of age, although production gradually declines from approximately 25 weeks of age. This means that in many countries, by approximately 72 weeks of age, flocks are considered economically unviable and are slaughtered after approximately 12 months of egg production,

Broiler: Broilers are young chicken of either sex, which are reared primarily for meat purposes and marketed at an age of 6-8 weeks

Grower: birds during 9-20 weeks or to the point of laying is referred to as grower period.

Layer: The birds during 21-72 weeks of age for the purpose of laying eggs (egg production).

Poultry management usually refers to the husbandry practices or production techniques that help to maximize the efficiency of production.

Brooder house: Brooder house should be draft-free, rain-proof and protected against predators. Good ventilation provides a comfortable environment without draft. All movable equipments like feeders, waterers and hovers should be removed from the house, cleaned and disinfected. Suitable litter material like saw-dust and paddy husk should be spread to a length of 5 cm depending upon their availability and cost. During the first week the temperature should be 95°F (35°C) which may be reduced by 5°F per week during each successive week till 70°F (21·10C). The brooder should be switched on for at least 24 hours before the chicks arrive. The behavior of chicks provides better indication of whether they are getting the desired amount of heat. . When the temperature is less than required, the chicks try to get closer to the source of heat and huddle down under the brooder. When the temperature is too high, the chicks will get away from the source of heat and may even pant or gasp. When temperature is right, the chicks will be found evenly scattered. In hot weather, brooders are not necessary after the chicks areabout 3 weeks old. 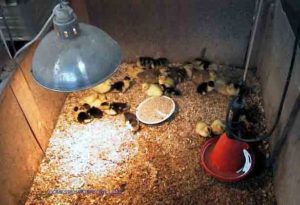 Brooder space of 7 to 10 sq inch (45-65 cm2) is recommended per chick. Thus a 1·80 m hover can hold 500 chicks. To prevent the straying of baby chicks from the source of heat, hover guards are placed 1·05 to 1·50 m from the edge of hover. Hover guard is not necessary after 1 week. Floor space of 0·05 m2 should be provided per chick to start with, which should be increased by 0·05 m2 after every 4 weeks until the pullets are about 20 weeks of age. For broilers at least 0·1 m2 of floor space for female chicks and 0·15 m2 for male chicks should be provided till 8 weeks of age. Plentiful of clean and fresh water is very much essential. A provision of 50 linear cm of water space per 100 chicks for first two weeks has to be increased to 152-190 linear cm at 6 to 8 weeks.

Light: Use correct lighting schedule to ensure better performance. While light period should not be increased for growing birds, it would be advantageous to increase the light periods or photoperiod for laying chicken from 22nd week of age onwards at the rate of 15 minutes per week so as to reach 16 hours of total photoperiod (natural plus artificial). When the birds have been in lay for about 6 months, the photoperiod may be increased to 17 hours per day.

The advantages of cage rearing are easy management, housing of more number of birds in limited space, clean egg production, less problem due to parasites and other diseases, easier culling, etc. Some of the disadvantages include high initial investment, wet dropping, odour and fly problem. To offset these problems, elevated cage houses are useful. 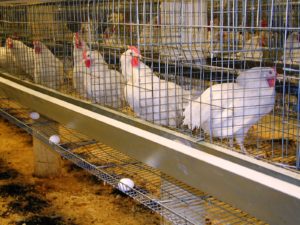 Long, continuous troughs are used for feeding caged layers. Water is supplied by channel running the length of the cage unit. The water channel is usually placed above the feed trough outside the cage. Instead of water channel, nipple drinkers can also be provided. Birds should be dewormed once in every 3 months.

Culling: Year round culling of unproductive stock will fetch better profit. Culling is based on physical characters, which reflect the physiological changes related to egg production.  Culling for poor production or non-production requires handling of all the stocks in the laying pen. Since culling may be a source of annoyance to the flock thereby causing a drop in production it should be practiced in the night.

Culling from outward Appearance: The appearance of a bird though not an index of its laying ability gives an idea about its health and vigour. The main characteristic for distinguishing a layer from a non-layer is given below.

Culling on the Basis of Moulting: Moulting which refers to the shedding of feathers provides some indication about the laying capacity of a bird. Good layers not only moult late but also complete the moulting period quickly and sometimes continue to lay even during moulting. Laying flocks are generally to be liquidated after one year of production, since keeping them longer into second year of production may be uneconomical. If there is any outbreak of vertically transmitted diseases, like salmonellosis, total culling is recommended.

Poultry meat is an important source of high quality proteins, minerals and vitamins to balance the human diet. Specially developed varieties of chicken (broilers) are now available with the traits of quick growth and high feed conversion efficiency. Depending on the farm size, broiler farming can be a main source of family income or can provide subsidiary income and gainful employment to farmers throughout the year. Poultry manure is of high fertilizer value which can be used for increasing yield of all crops.
The advantages of broiler farming are

Scope for broiler farming: India has made considerable progress in broiler production in the last three decades. The broiler production has sky rocketed at an annual growth rate of about 10% and stands at about 2.3 million metric tons of chicken meat (FAO 2005). The population of broiler poultry as per 2004-05 census is 199.73 million. Today India is the fifth largest producer of broiler meat in the world. Despite this achievement the annual per capita consumption in India is only 1600 grams of poultry meat as against the world average of 5.9 kg of meat.

All these points cover the managemental aspects of rearing the poultry birds which is helpful in diversification of agriculture system.